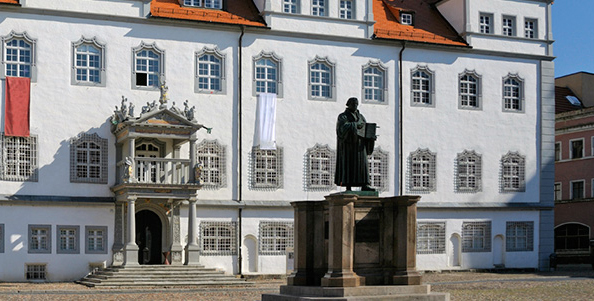 You may have seen our previous post on Globus Faith, the new arm of Globus Tours that sponsorsÂ spiritual pilgrimages and other faith-based travel. As you might imagine, religious faith has a rich and long history in the course of human events, and this gives us both many destinations and sights for traveling and many reasons to celebrate.

This particular reason to celebrate is an anniversary: The Protestant Reformation was called into action when Martin Luther posted hisÂ Ninety-Five Theses;Â while the date is inexact, it hasÂ historically been marked on October 31, 1517– making 2017 the 500th anniversary of the Reformation.

To commemorate this special anniversary, Globus Faith is offering two travel packages that let you seeÂ the historical sights associated with the Reformation and the early Protestant church.

500th Anniversary of the Reformation Tour

To mark the anniversary, this tour from Globus Faith includes a twelve-day itinerary through Germany, to many of the historically and religiously significant sites associated with theÂ Reformation and the Protestant Movement. Among the stops you will make on this tour:

Of course, you’ll see otherÂ cities, such as Berlin and Munich, and the historical sights therein, as well.

This itinerary is slightly different and a little shorter than the other, but makes an appealing alternative if you don’t have time for the longer visit. The major difference is that you won’t get to take aÂ cruise on the Rhine River after visiting Worms, so this can be a more affordable option for those not particularly interested in or suited to river cruising.

If the idea of a tour of the great sites of the Reformation interests you, either because of its historical or religious significance, AffordableTours.comÂ can offer you the best deal on such a vacation package with one of our partners. Visit our website or call 1-800-935-2620Â to get the package that’s right for you at the right price.