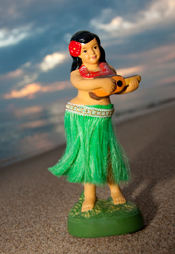 Legend has it that each of the islands of Hawaii is a child of the gods.  Formed by volcanic eruptions eons ago, the oldest island, geologically speaking is Kauai, also my personal favorite.  It’s a little “sleepy” compared to Maui or Hawaii (the BIG island), but that’s part of the appeal.  It’s a magical place, with a seemingly effortless ability to make the mystical seem routine.  Kauai gives her visitors a real taste of the old Hawaii, the romantic retreat of song and story, and having some of the most diverse topography imaginable for a 551 square mile area.  Kauai is circular in shape; to the southwest of Lihue airport is the popular “Poipu” area, tons of sunshine, beautiful beaches, all kinds of accommodations from budget to super deluxe.  To the north are Princeville and Hanalei Bay, where it rains more, but then you get the double rainbows and a mystical mist in the air, followed by plenty of sunshine.  This part of the island is the gateway to the wild Na Pali Coast, one of the most spectacular stretches of scenery in the world.  There are three ways to explore this incredible area: by helicopter for aerial views, by zodiac raft from the Pacific looking up, or by foot on a hiking trail that is not for the feint of heart, but probably the thrill of a lifetime for buff-bodied explorers.  The trail begins at Kee Beach, where the Kuhio Highway ends.  Parts of the path are only a foot or so wide, with 1,000-foot sheer drops to the rocky coastline below.  At times the path does descend to beautiful, isolated beaches, but beware the very dangerous surf.  As the path winds upward again, sweeping views of the blue-banded Pacific are heart stoppers, not to mention the school of leaping dolphins frequently encountered.

If you choose the wonderful 5-hour zodiac raft option, you’ll have a chance to enjoy some of the best snorkeling on the island, in the “Tunnels.”   These are underwater lava formations, which make a perfect habitat for thousands of brilliantly colored fish.  The 32 seat raft offers day cruises, with breakfast, lunch, snorkeling and in season, whale watching.

Two other astounding outings on Kauai are renting kayaks to paddle gently inland on the winding Hanalei River, past fields and forests for an hour or so.  The other is to experience the “Grand Canyon of the Pacific”, Waimea Canyon.  It’s a mile wide and 14 miles long.  From Waimea Canyon Lookout you’ll experience a fantastic view of the canyon.  It’s fun to rent bikes and ride down from the top of the Canyon (only Lance Armstrong could ride UP!)  This is a 13-mile trek and tons of fun.

Back to the geological evolution, then came Oahu, home to Honolulu and Waikiki Beach.  A visit to Honolulu is a must for first time visitors to the islands of Aloha.  The city represents an exciting crossroads of east and west, a unique blend of cosmopolitan and Polynesian.  The cuisine, shopping and nightlife of Honolulu please the most discriminating traveler.  Oahu offers some very beautiful scenery and good sightseeing.  Of course we’d include Pearl Harbor with the USS Missouri Memorial, Foster Botanical Gardens, the aquarium, and the James Campbell National Wildlife Refuge.  But, unless you are a total party-animal, I say dispense with Honolulu as quickly as possible, 2 days, 3 nights are sufficient.

Continuing the pecking order, enter Maui, “the magic isle”.  Named after a fun loving demigod, tales of his magical exploits are often the subject of hula, Hawaii’s most beautiful form of storytelling.  Maui rates as the most popular destination in the Pacific.  It’s sleek and chic and brimming with the “living large” crowd, who spend small fortunes to stay in outrageously luxurious resorts.  At the Grand Wailea Resort, one can stroll to lunch through art galleries, displaying massive bronzes by Léger, Picasso lithographs and Warhol silk-screens.  For those whose tastes and budges are somewhat less GRAND, there are plenty of other accommodations. 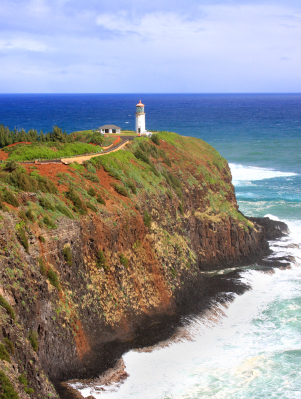 Finally we come to the youngest of the main islands, named Hawaii, and affectionately referred to as “The Big Island” because big she is…twice the size of all the others combined.  The startling diversity of its landscape is a thing to behold.  On my first trip to the Big Island, we landed at Kona Airport, and I immediately thought, my god, we’re in the wrong place.  All I saw before me was black lava rock with scrimpy little outcroppings of scrubby brown grass.  This can’t be Hawaii said I.  But two days and a sopping-wet rain forest later I realized the diverse quality of this lovely place.

Remember that one of the big lures to the Big Island is Kilauea Volcano, made active since 1983 by the volcano goddess Pele!  Kilauea is part of the Hawaii Volcanoes National Park, and is open daily.  Arriving at the visitor’s center, one begins the 11-mile Crater Rim Drive, passing over some of the Pacific’s most bizarre scenery.  It’s quite an awesome sight to watch the eruptions and resulting glow of lava flowing toward the ocean, and night viewing is a very special experience.

Off-season bargains abound for air and car packages. In November, one can fly nonstop to Honolulu, continue on to Maui, and have a car for 7 days for $830.   You’ll fly into Honolulu, then connect onward to the island(s) of your choice.  Words of advice: Hawaii is quite a distance, so do not think for one moment that you can do all of the islands in a week.  I suggest a minimum of 8 days, 7 nights for a visit to Hawaii.  That allows a couple of nights in Honolulu for 1st timers, with 5 nights at another island choice.  Or, skipping Honolulu, one can reasonably combine 3 nights one island, 4 nights another, but anything less than 7 nights is dreadfully exhausting because of the long distance flights.

However, Hawaii is decidedly one of the most beautiful and friendly places on earth, and thus provides a warm and cozy comfort level to their visitors. Until next time, ALOHA!

For your next vacation contact Sandra Wilkins at [email protected]