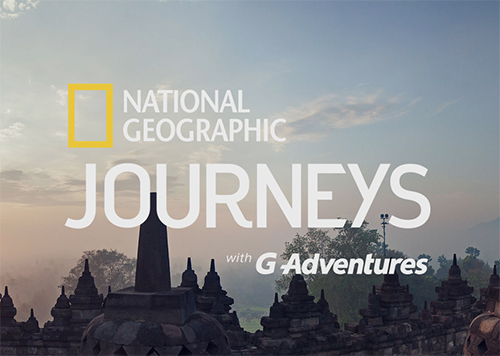 Over the last 25 years, since its founding in 1990, G Adventures has built itself into the largest small group adventure travel company in the world, while combining that focus with travels that have a positive cultural and environmental impact. The people at G Adventures really believe in the power of adventure travel to change lives, and their newest partnership reflects those values.

G Adventures has announced a partnership that seems so normal and natural, you may be surprised it hasn’t happened already. With their shared values of social responsibility and world, and their focuses on worldwide culture and the life-changing effects of travel, G Adventures and National Geographic are a perfect fit together.

To that end, G Adventures is celebrating its 25th anniversary by partnering with National Geographic to create National Geographic Journeys, a series of tours designed to focus on local cultures and meaningful experiences, in locations all around the world, particularly those where travelers can engage in projects to effect social change and improve the lives of the locals.

“National Geographic isn’t new to travel. Their travel division takes people to some of the most iconic places in the world. But with us, they’re going to be more accessible than ever before,” G Adventures Founder Bruce Poon Tip said at his company’s 25th anniversary party, where the partnership was announced.

On a National Geographic Journeys vacation, you’ll have the chance to have experiences like these:

The National Geographic Journeys program currently has 70 travel experiences planned, and the first tours launch December 15, 2015. Most group tours will be very small, typically no larger than 16 travelers.

G Adventures has also taken the opportunity to launch several new initiatives that further their goals of providing adventure travel while affecting positive change to the regions. Their commitment of $5 million to establish 50 new development projects over the next five years is possibly the largest gesture toward these goals, but it’s not the only one. The company also announced a new fleet of overland trucks in Africa, to expand their offerings and potential projects there, as well as a new river cruising division, which hopes to bring the same kind of projects to even more locations.

If any of this sounds interesting to you, visit AffordableTours.com or call 1-800-935-2620, and one of our travel experts will help you get additional information about these new exciting National Geographic Journeys vacations.