When friends heard that my good friend and work colleague, Aga Olewinska, and I were going to see Mackinac Island, the common response was “Macki- what?” Others asked, “where is that?” When I answered Michigan, they said “Of all places, why there?”  I said, “Why not?”

The tour, Mackinac Island and The Great Lakes with Globus is always sold out and the Midwest part of the US was unknown territory to both of us. Those were good enough reasons to take this trip. On the other hand, a handful were excited for us because we would get to see the Grand Hotel, made famous by the 1980’s film “Somewhere in Time” starring Christopher Reeve, Jane Seymour, and Christopher Plummer. Now that heightened my curiosity because I knew that movie by heart. Other than that, we didn’t know what to expect from the trip.

As the trip rolled along, Aga and I were taken aback by the unforgettable scenery and pleasant surprises that kept unfolding as we meandered through the great Lakes of Michigan and Huron. We experienced the fantastic resort area of Mackinac Island and soaked up history when we visited the great American cities of Detroit and Chicago.

The Mackinac Island and The Great Lakes with Globus tour kicked off in Detroit, Michigan. This city is best known as the center of the U.S. automobile industry, and the “Big Three” auto manufacturers General Motors, Ford, and Chrysler thus earning the nickname “Motor City”. As soon as our flight landed, we were whisked away to our hotel by our arranged arrival transfer service with Globus. We had time to explore nearby areas so we hopped on a People Mover, Detroit’s elevated light rail system, which was easily accessible from our hotel. Our hotel room on the 67th floor gave us a stunning view of Detroit’s downtown, the Canadian side — Windsor, Ontario to be specific, and the Detroit River. The view was amazing at night.

An interesting find was a road tunnel to get to the Canadian side that was situated beside our hotel. If we had our US passports, we would surely find ourselves taking a peek on the other side!

At 6pm, we were back at our hotel in time to meet our traveling companions for a welcome drink and orientation.

Bright and early the next day, our motorcoach rolled out to explore more of downtown Detroit on our way to the Henry Ford Museum, the ultimate place to experience America’s past and present. 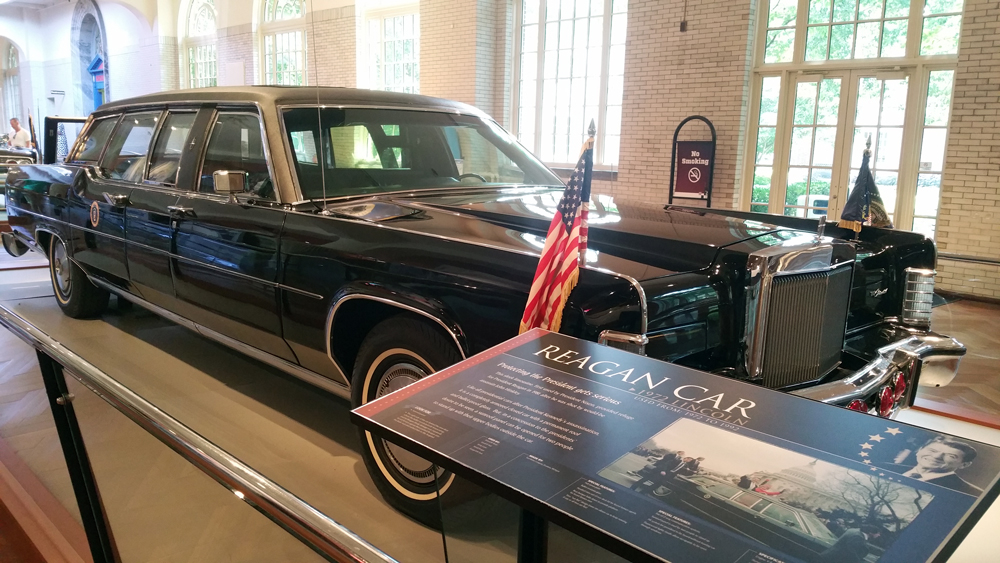 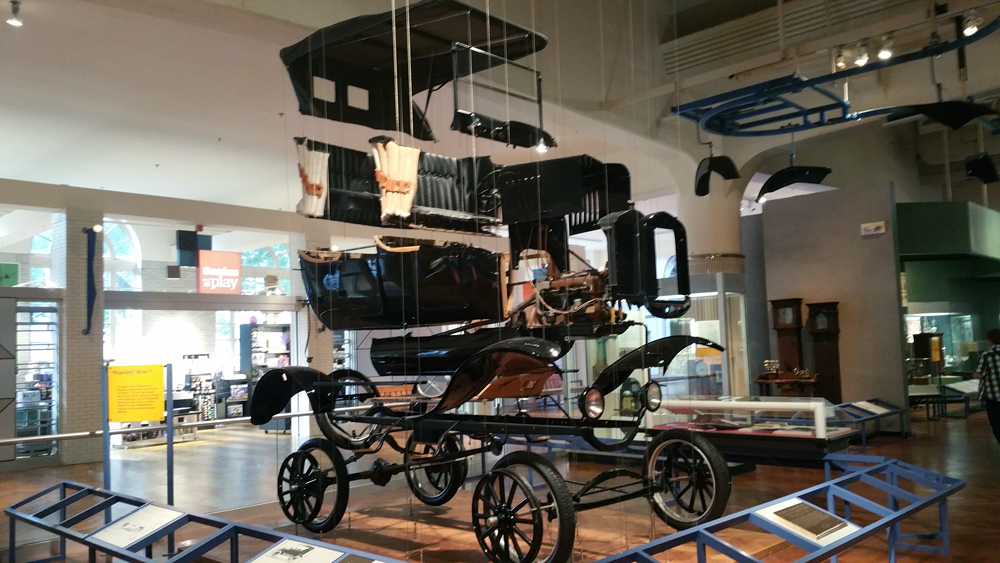 Here you will see the evolution of planes, trains and automobiles. Presidential cars, the Lincoln chair, the Rosa Parks Bus are on display, to name a few. 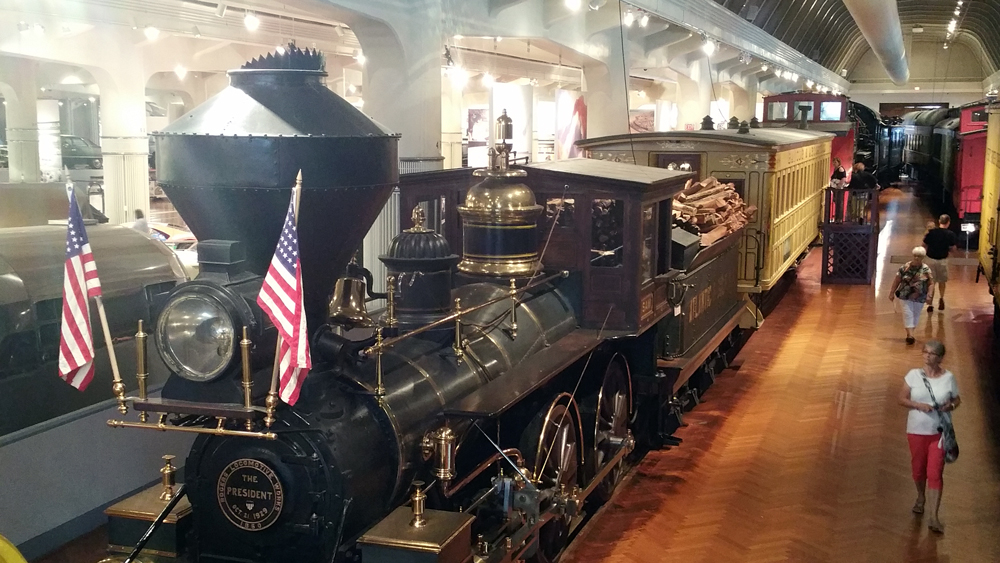 The underlying theme of the exhibits is to inspire people to learn from the past to help shape a better future. Such an enlightening experience. The night found us in a little Bavarian town of Frankenmuth, founded by German immigrants in 1845. 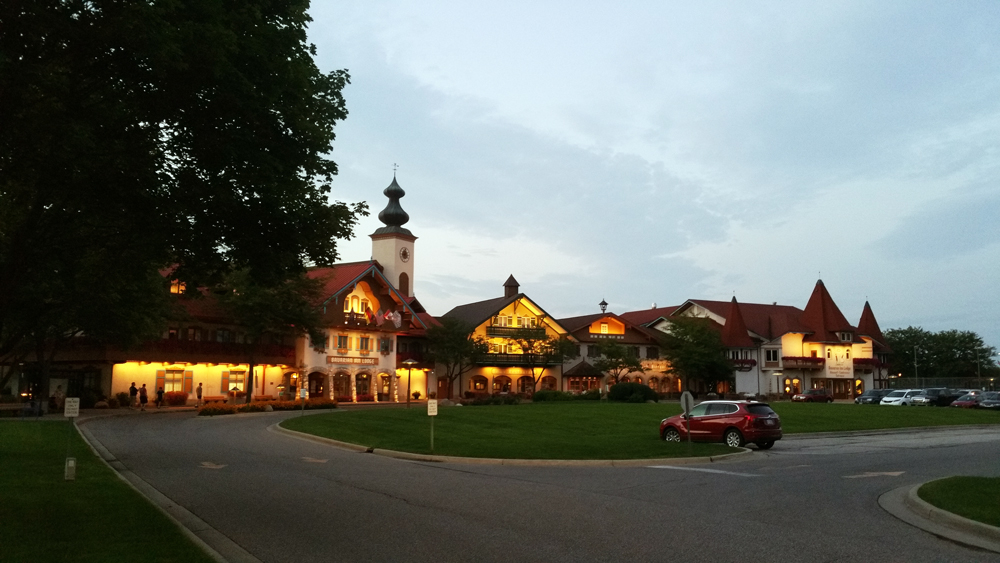 And for the Christmas fanatics, it is also home to the world’s largest Christmas store, Bronner’s Christmas Wonderland, where they’ve been making spirits bright since 1945. 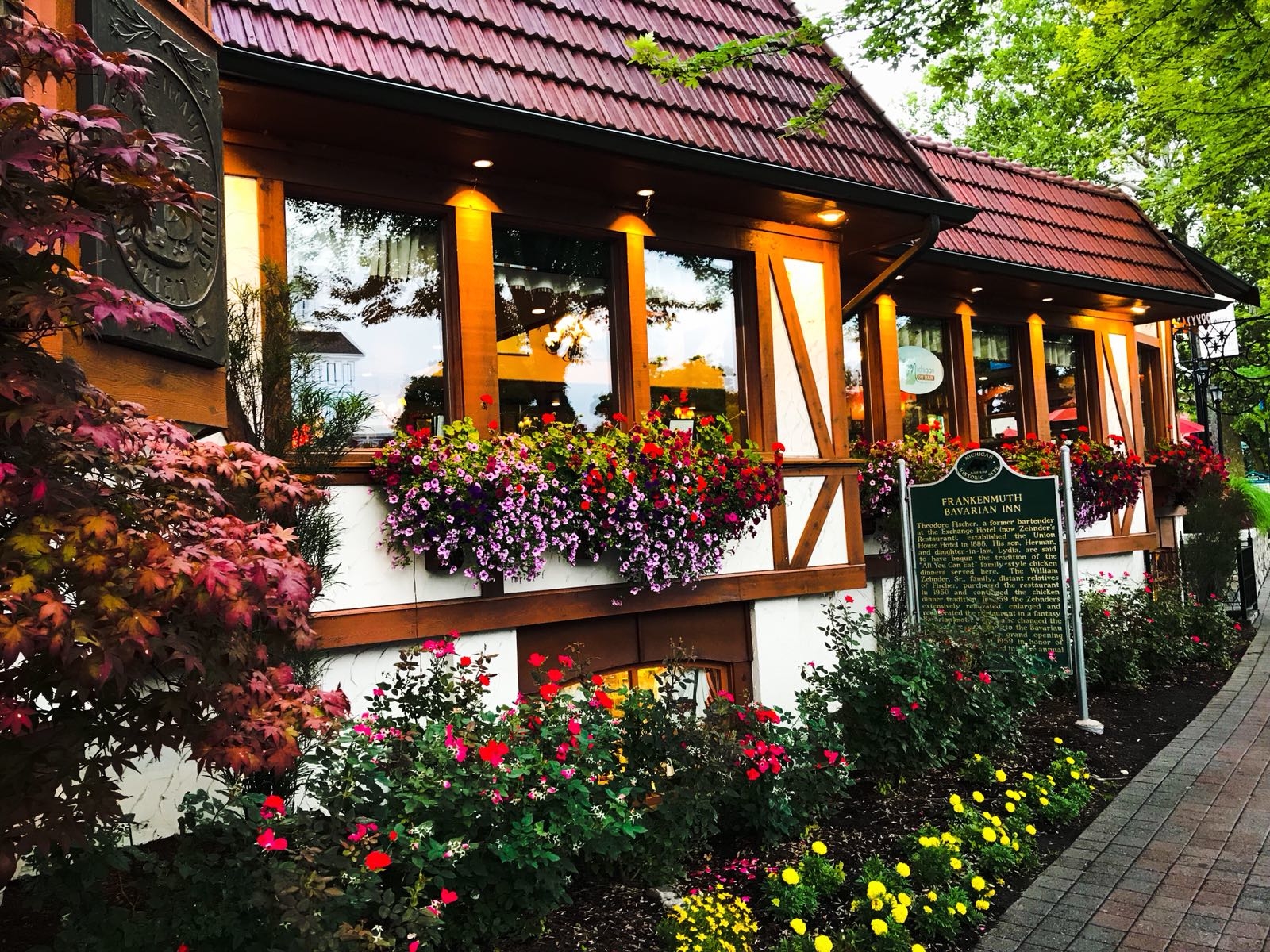 For the evening, we were treated to an authentic Bavarian dinner with wine tasting. This introduction to local flavors is a highlighted feature aptly named Local Favorite, typical with Globus itineraries. 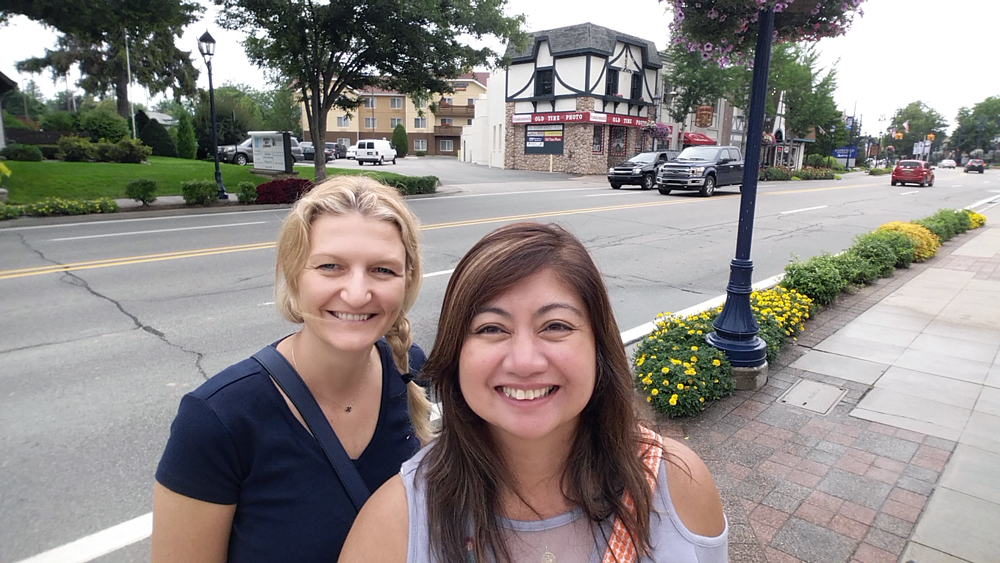 The next day on our Mackinac Island and The Great Lakes with Globus trip, we journeyed north to Mackinac Island. The only way to get to the island is by ferry so our wonderful motor coach driver dropped us off at the ferry landing in Mackinaw City. Once we set foot on the island, Aga and I were wide-eyed and stuck on our feet as we took in a whirlwind of breathtaking views that greeted us, no matter where we looked. Not only that, there was a certain feel that took you back in time. This island had an air of 19th century gentility where bicycles and horse-drawn carriages were the only means of transportation. What a special place! Such a hidden treasure tucked away in the corner of this Earth! Romantic. Historic. Absolutely charming.

Mackinac Island — pronounced Mack-in-aw — is at the northern tip of Michigan near where Lakes Huron and Michigan meet. The island has been a summer vacation destination since the 19th century and much of it still resembles that era. One of the best things that happened to this island was the automobile ban beginning in 1898 because horses got spooked by the noise it made. Our hotel’s shuttle service was a horse-drawn carriage. 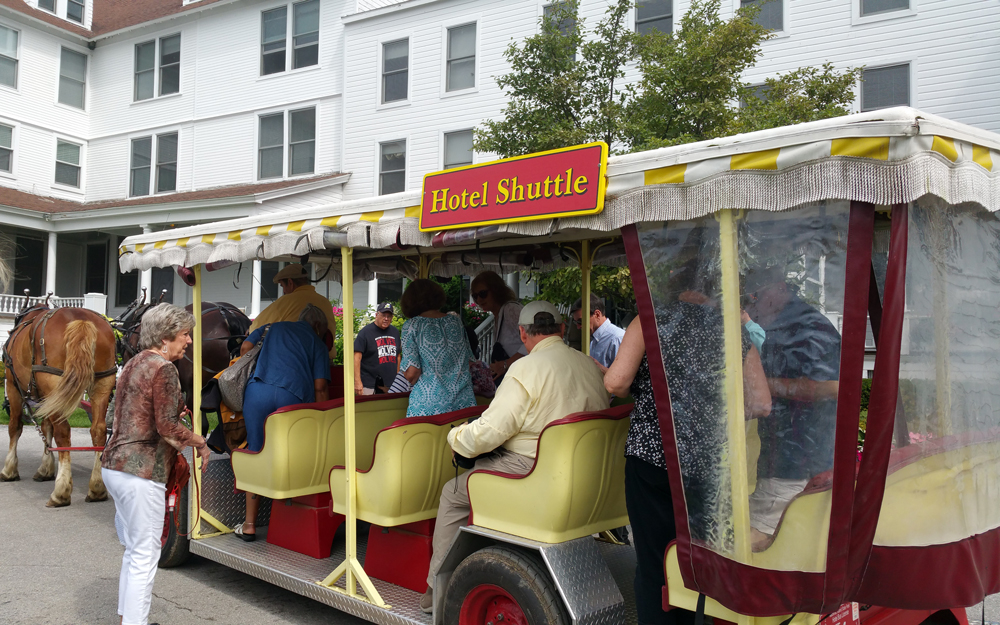 The absence of cars and the resulting benefits – exhaust free air, quaint and narrow lanes, no auto noise and picturesque horse-drawn carriages-have created a unique, charming and historic ambiance. So how do you get around? 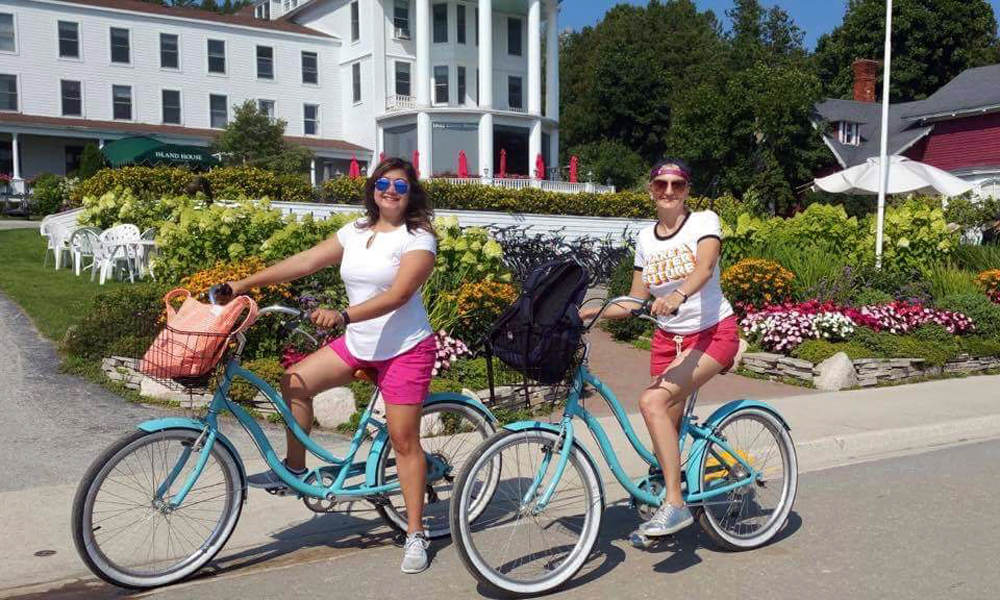 You travel by foot power, either by walking or peddling. This island is a bicyclist’s paradise, especially the road around the island which Aga and I chose to take. We rented our adorable bikes right outside our charming Island House Hotel and started a scenic work-out ride around the island. 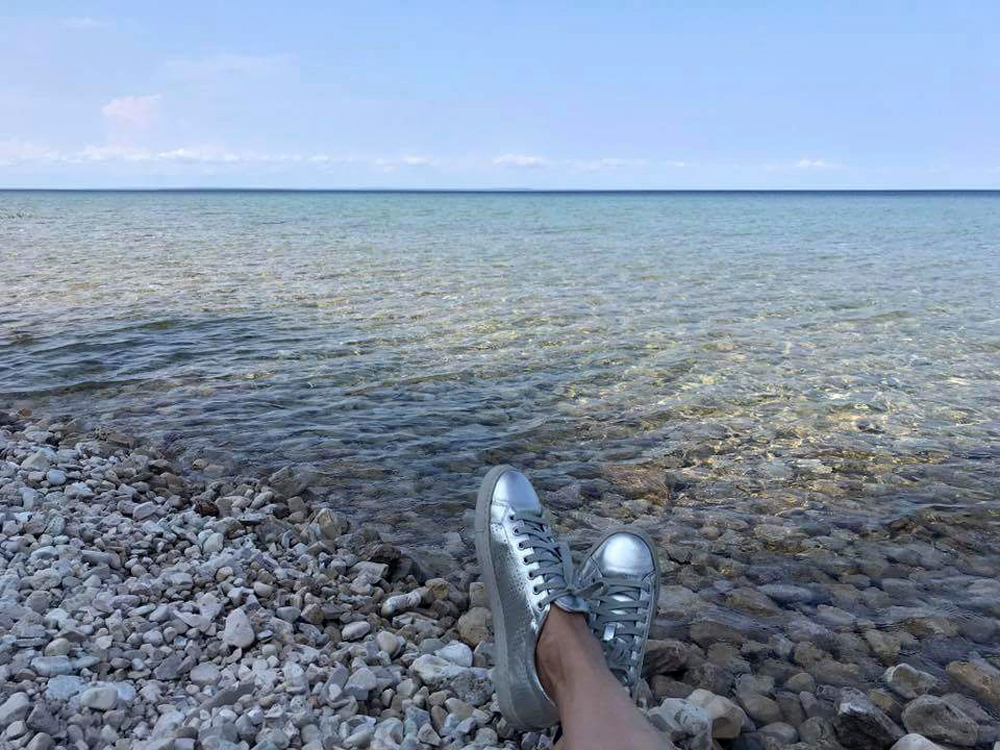 Eight miles in circumference, Lake Shore Boulevard is the only state highway where cars are banned. This picturesque route takes riders past landmarks, beautiful Victorian summer homes with manicured landscapes, and provides spectacular views of the shimmering clear blue waters of Lake Huron. While biking, always watch out for pedestrians and horses! 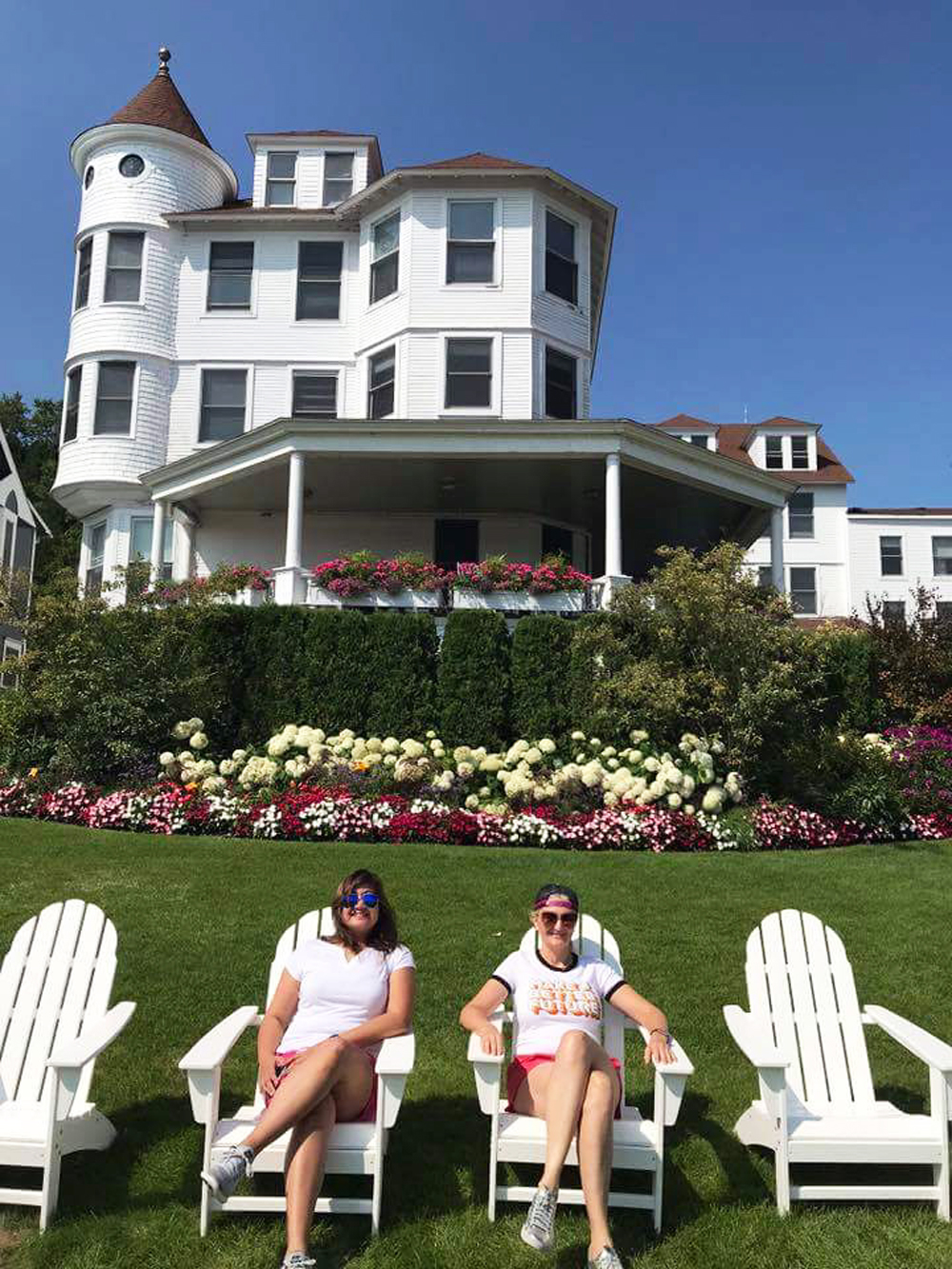 Our home on the island, The Island House Hotel (est. 1852), was so endearing! You feel like you are stepping back into a quaint lifestyle in a waterfront setting. It was located within walking distance to everything… even the famous Grand Hotel. 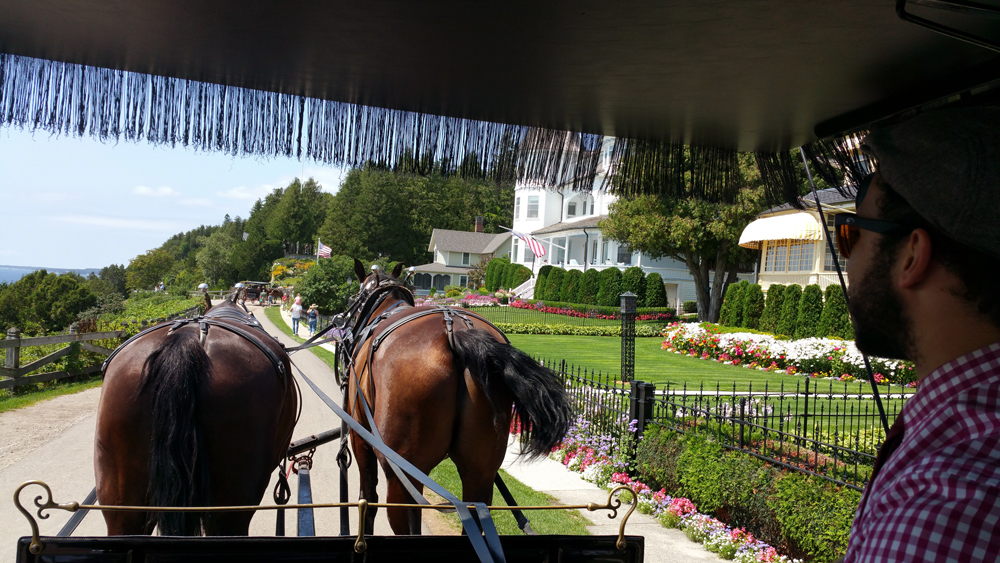 Another great way to see the island is by horsepower. Horse drawn carriage tours of the island’s scenic and historic sites are very popular and this is the manner our tour group went to explore the island. 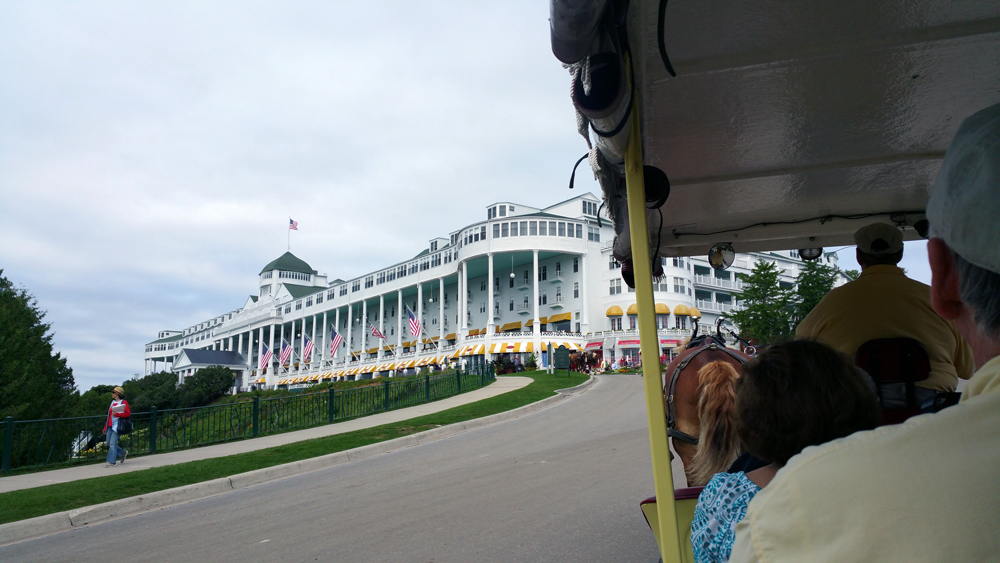 We clipped–clopped through breathtaking forests and floral vistas and got a view of the sparkling water from the Arch Rock overlook. 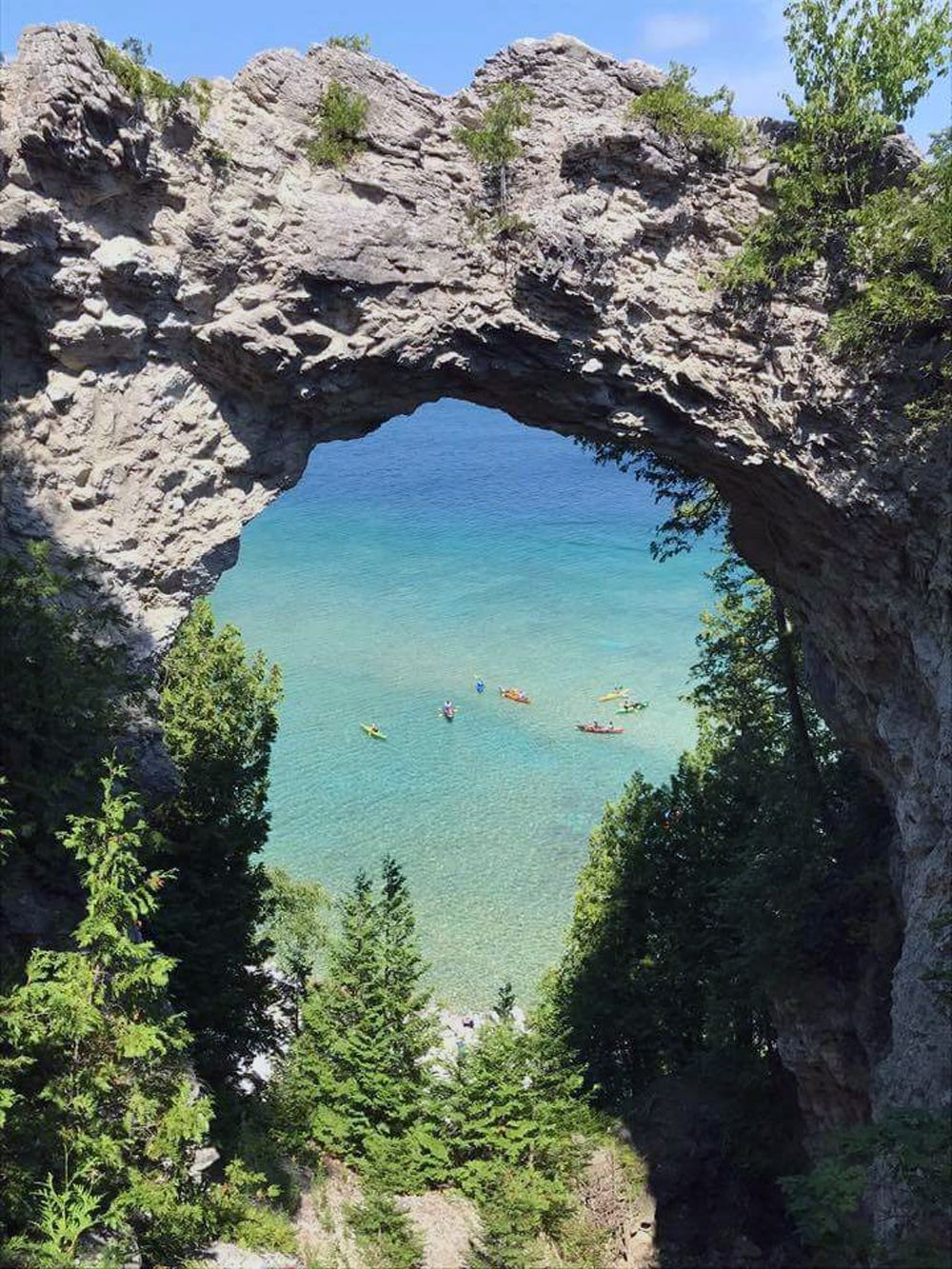 We managed to slip in occasional selfies against the magnificent grandeur of the Grand Hotel and snapped photos of its stunning gardens from a rocking chair on its porch (the world’s longest at 660 feet). 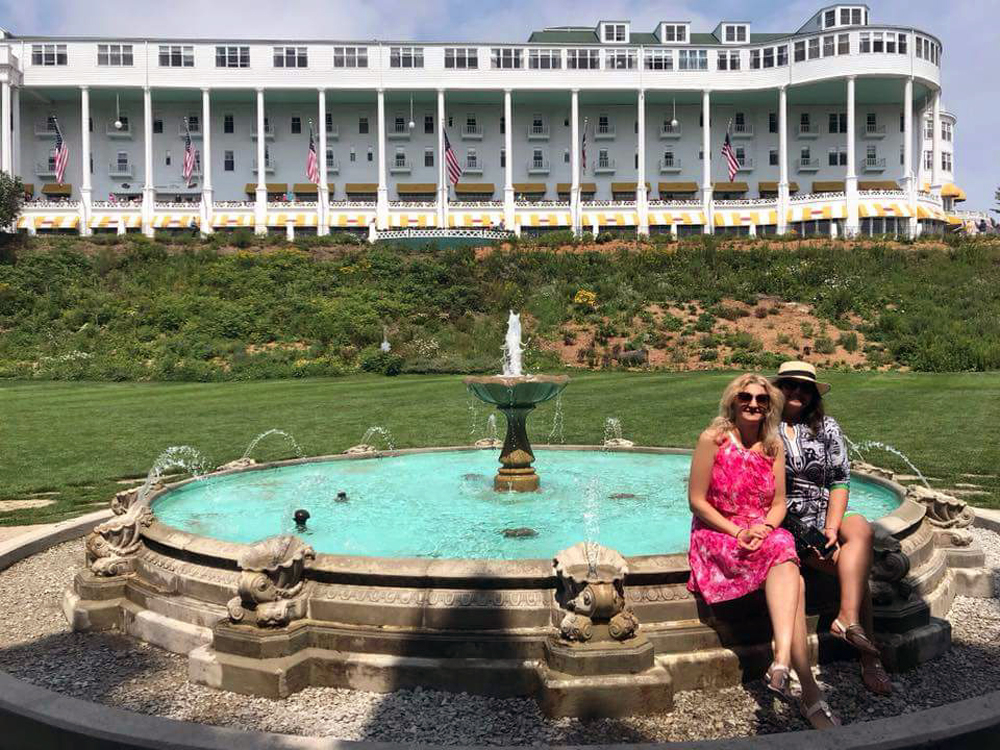 By the way, no tipping allowed at this hotel and a strict dress code is enforced. The Grand Hotel is a place for genteel resorters attracted to the picture-perfect scenery around Lake Michigan. Indeed you are trapped somewhere in time! 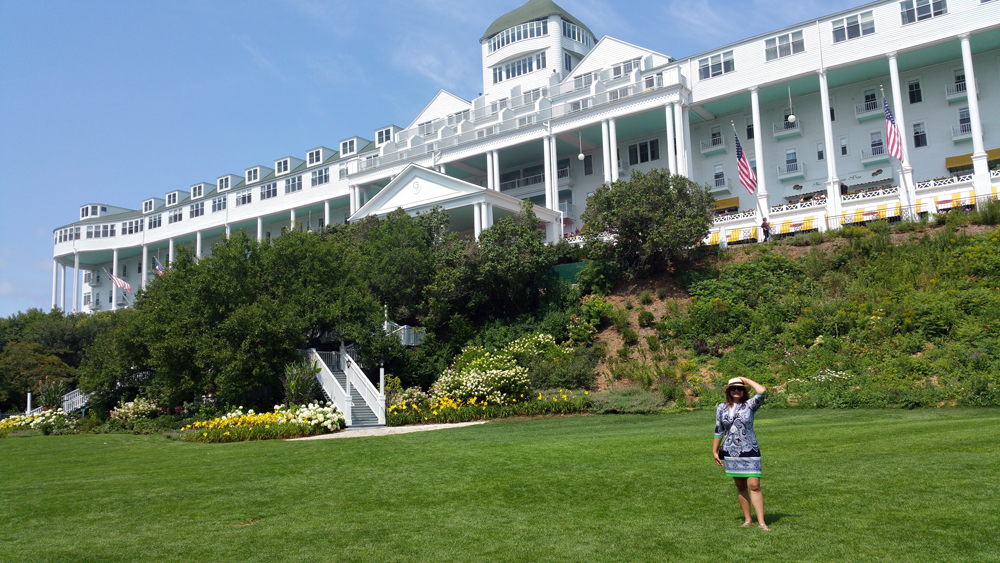 Another fact we learned was that for more than a century, Mackinac Island’s fudge has been an institution that’s become famous worldwide. Fudge devotees are known as “fudgies” – a term that is also synonymous with Northern Michigan tourists. You can just imagine the delicious fragrance wafting in the air every time you pass by the many fudge shops lining the harbor area. When night descended, the island hushed down to a peaceful solitude where you find yourself gazing at the beautiful sunset, not a sound heard but the clip clop of the horses hooves echoing from a distance. 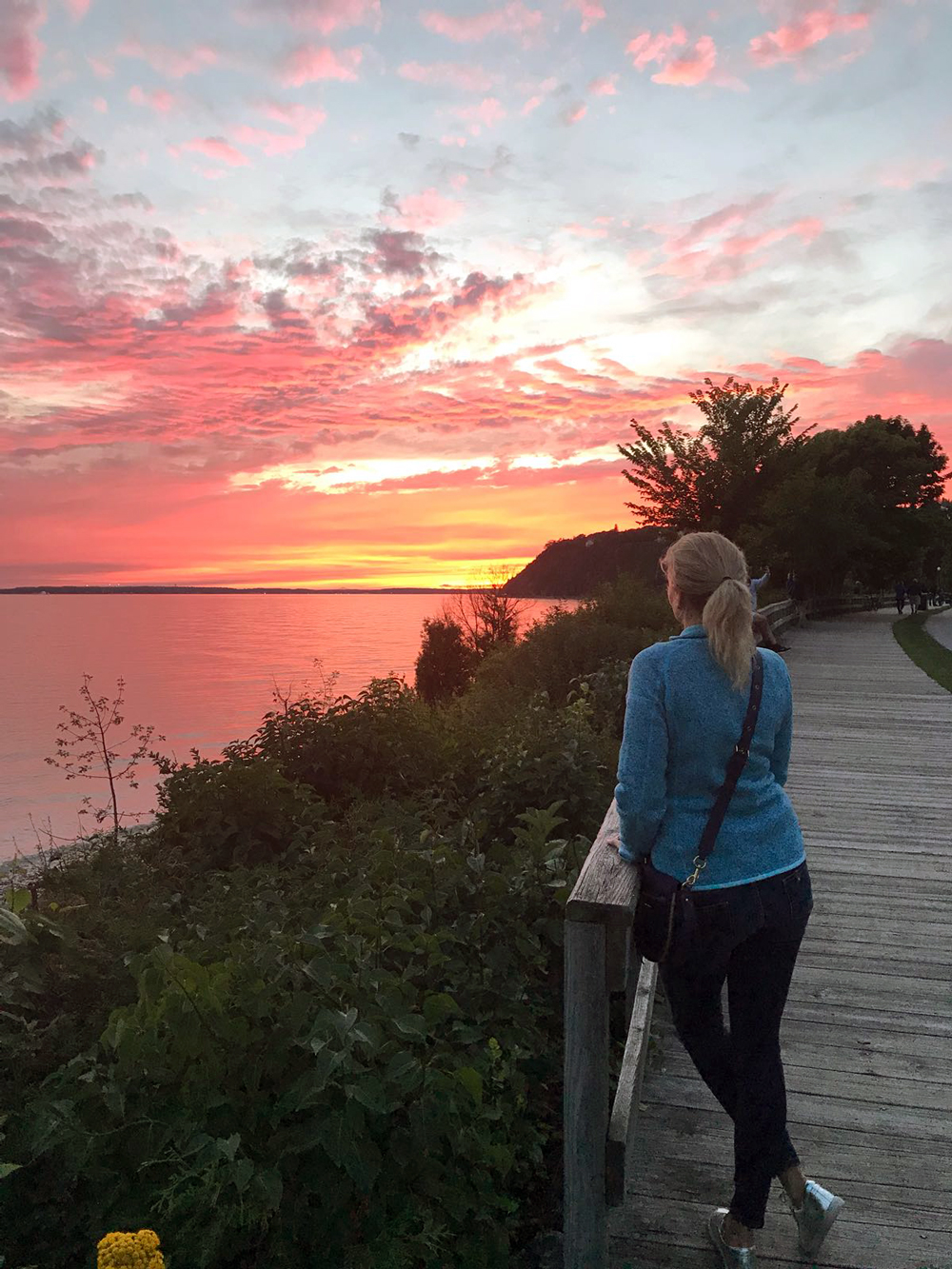 Indeed, Mackinac Island is definitely Michigan’s crown jewel. For any culture, history, nature and wildlife buff, this island has something for everyone. The food did not disappoint too!

After 2 days on the island, we were back on land. We boarded our motorcoach waiting for us in Mackinaw City and we were on our way to Sleeping Bear Sand Dunes. A little side note, for those who collect National Park passport stamps, this trip visits 2 state parks. One being Mackinac Island, Michigan’s first state park and the other, Sleeping Bear Dunes National Lakeshore, another jaw dropping scenery, where sand dunes rising 450 feet above Lake Michigan afford spectacular views across the lake. This national park was also voted as one of America’s most beautiful places. 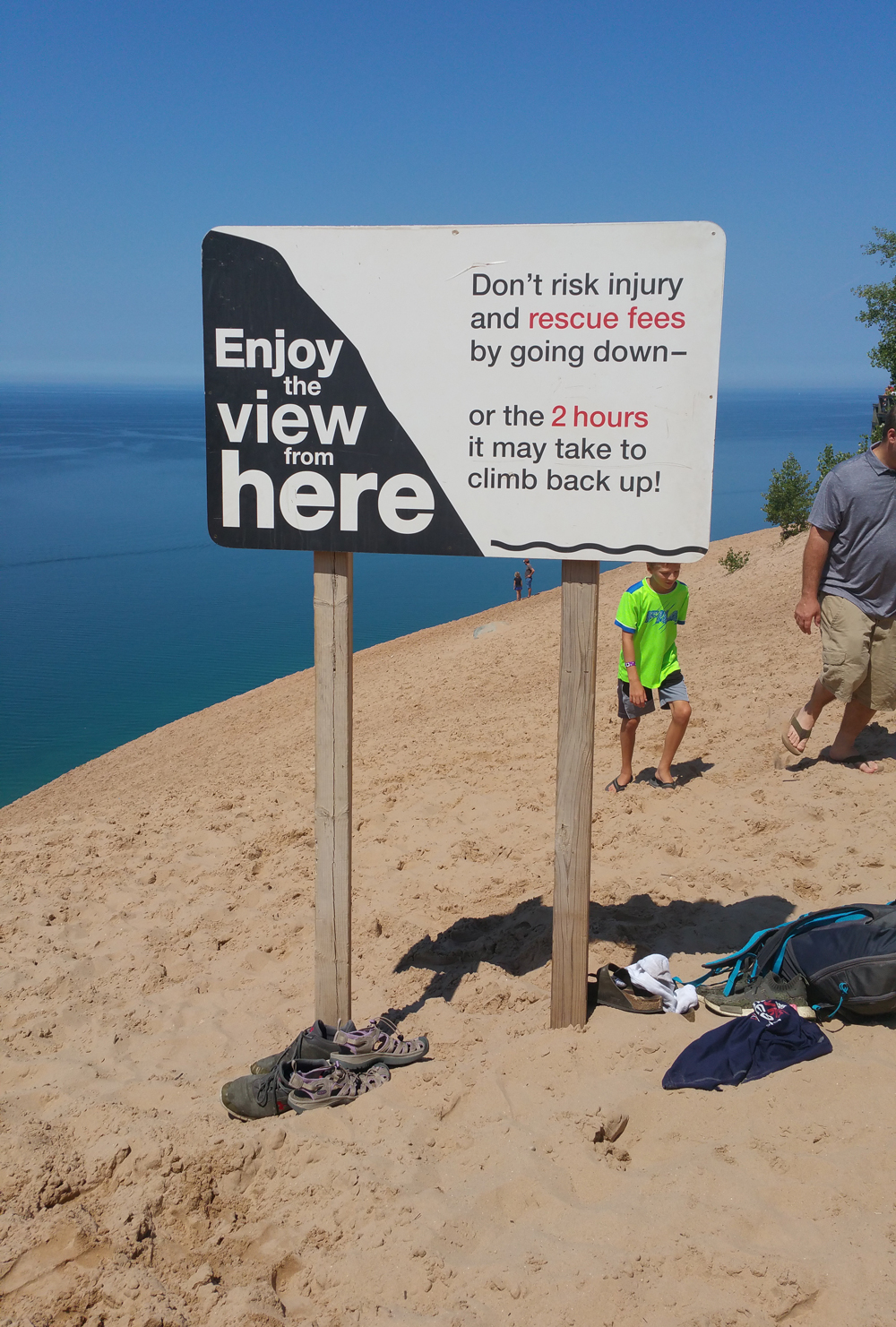 We passed through more breathtaking scenery, skirting Lake Michigan and into the famed Tunnel of Trees and stopped at historic harbor towns before reaching the city of Grand Rapids and ultimately, Chicago. We stayed for a night in Grand Rapids and we got to visit the Gerald Ford Museum. This museum has been perfectly curated to help the average citizen understand the extraordinary circumstances that surrounded Gerald R. Ford’s presidential term.

Going back to a big city meant we were at the tail-end of our Mackinac Island and The Great Lakes with Globus journey. As we were entering the state of Illinois, Aga and I brought with us an understanding and appreciation of Michigan. Nature was bountiful, the lakes clear, fresh and clean. We now understood the catchphrase, Pure Michigan. You have to see it to experience it. We already plan to come back with our respective loved ones. 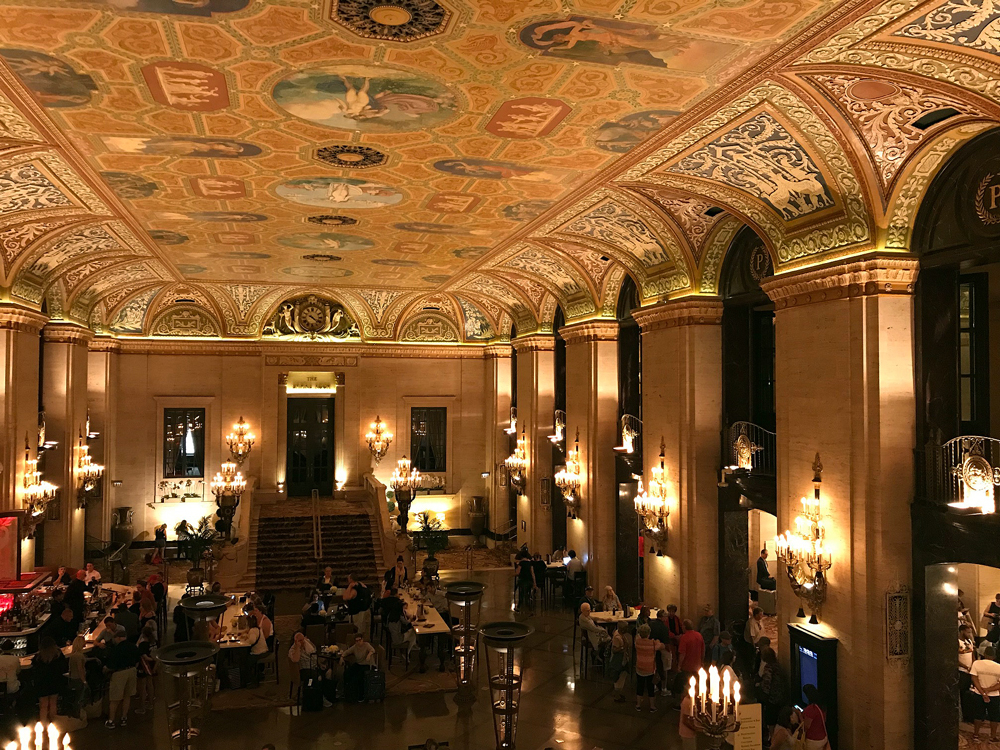 After our farewell dinner at the beautiful Palmer House hotel, we set out on our own to catch the Architectural night cruise of Chicagoland America’s third largest city. 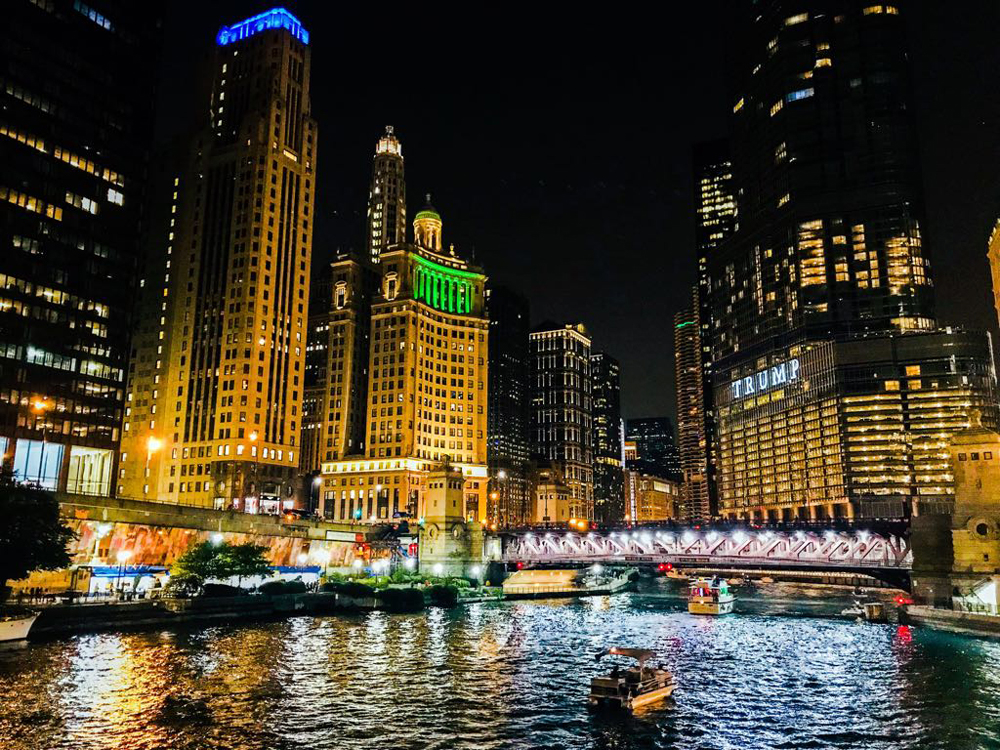 After all, Chicago is the birthplace of the skyscraper. 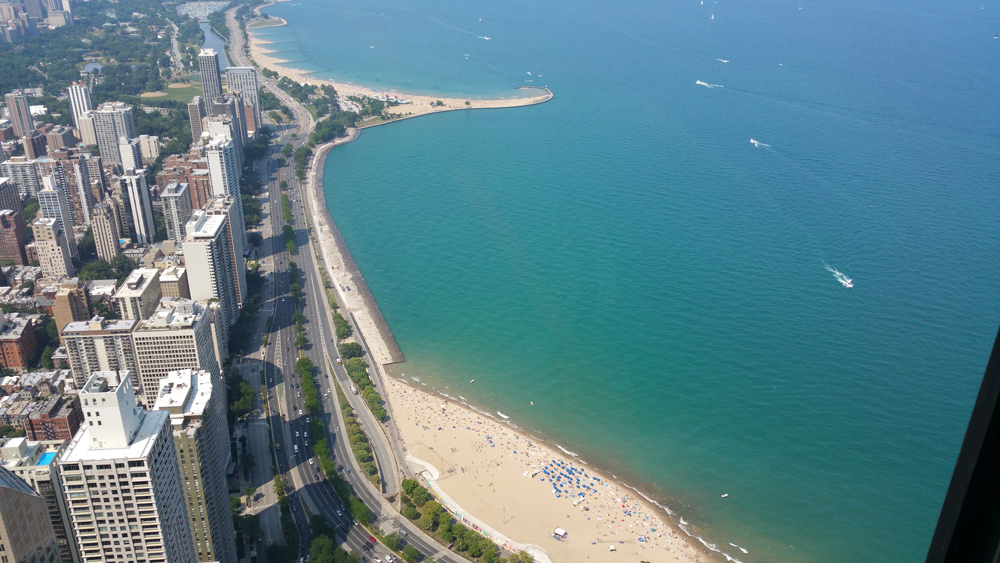 The next day, we explored more of the city independently. We walked its downtown streets and visited famous landmarks such as the Cloud Gate, well known as The Bean and did the popular Tilt where you tilt outward from the John Hancock building to get an amazing downward view of the city from over 1000 feet up. 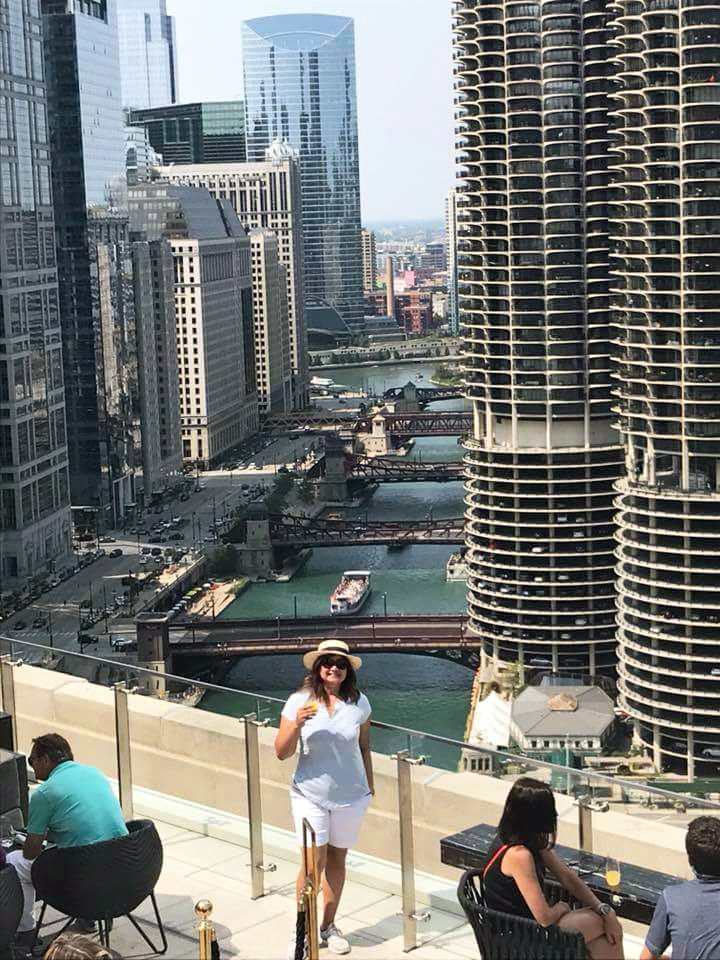 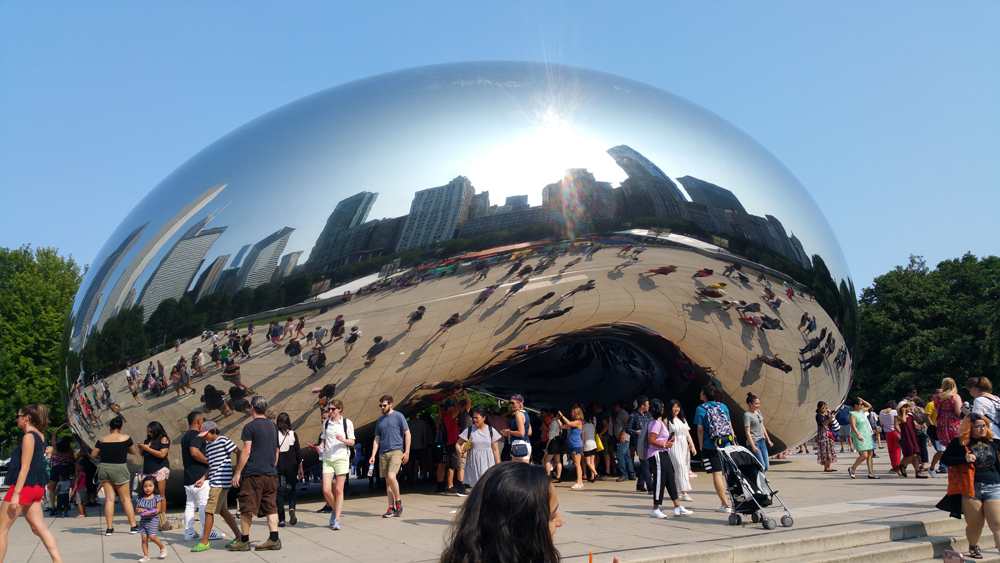 Accommodations were absolutely adorable as properties were all landmark lodgings. The properties have faithfully maintained their historic integrity, architecture and ambiance that they have earned the bragging rights of being a member of America’s Historic Hotels. Globus did a great job in choosing the hotels as all of them were situated right in the midst of historic downtowns, within walking distance to points of interests,  shops and restaurants. 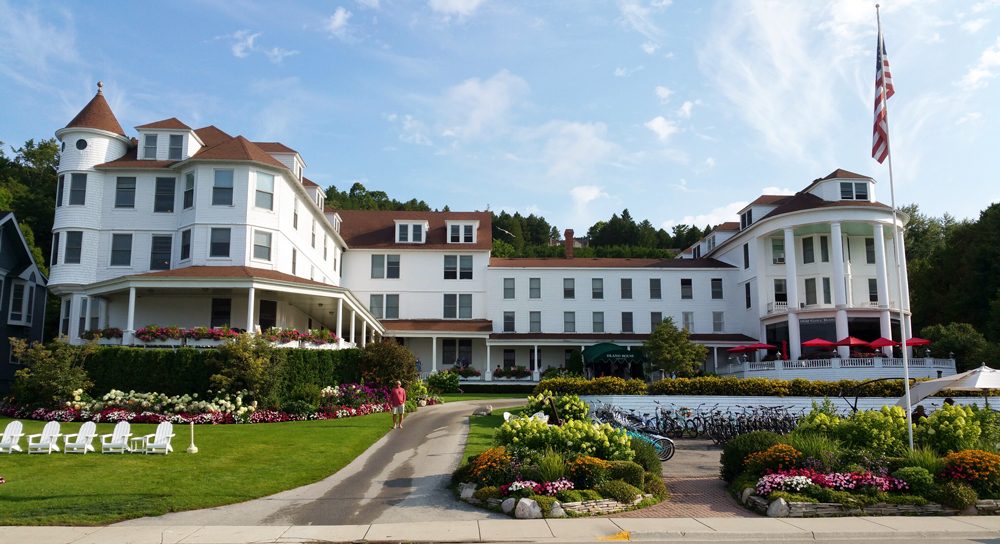 Everyone on the tour got along well. The motorcoach was very comfortable, the driver was excellent and the Globus guide was very personable and knowledgeable. She was always securing the best experience for the group.

Mackinac Island and The Great Lakes with Globus is a great way to see a lot over a short period especially if you don’t know an area. From scenic routes to rugged trails and from sand covered to the well-traveled roads, this trip leads us to the beauty of nature and the beauty of simple pleasures. Whether you are an urban adventurer or an outdoor enthusiast, a foodie or traveling with your family or making memories with friends, this trip offers so much for everyone, young and old alike. As we were getting out of the city and into these quaint towns, we were treated with a scenic journey through the Great Lakes region, highlighted by old-fashioned traditions, and great local culture. Mackinac Island and The Great Lakes with Globus was truly exceptional!