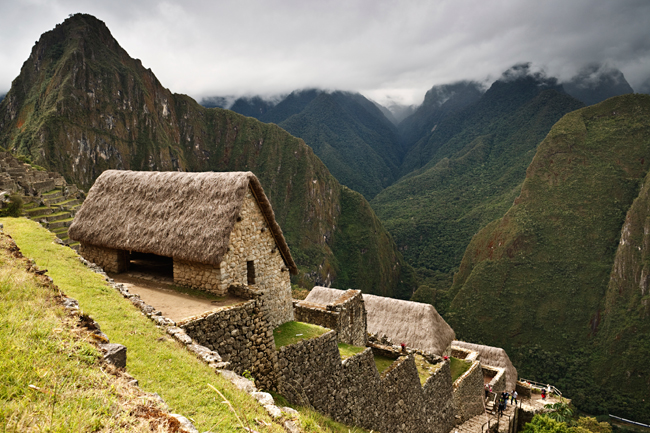 Often called the “Lost City of the Incas,” Machu Picchu is a pre-Columbian, Incan site that sits nearly 8,000 feet above sea level in Peru. It is perched on a mountain ridge above the Urubamba Valley northwest of Cusco. Hidden in the mountains, this mysterious site was seemingly not found nor destroyed by the Spaniards during the height of the Spanish Conquest; it appears as if its inhabitants lived in the remote location until the late 1500s. Today, Machu Picchu is a well-preserved reflection of Inca architecture.

Getting to Machu Picchu is an adventure in itself. Typically, visitors board a train that winds through the spectacular Urubamba Valley to the end of the line: the village of Aguas Calientes, a frontier town nestled in the hills beneath Machu Picchu. Then travelers board a bus to ascend the switchbacks of Hiram Bingham Highway, named for the Yale University explorer who introduced Machu Picchu to the rest of the world after he “discovered” the sacred site in 1911.

Touring this Inca fortress—much of which has been restored so visitors can see what the original buildings looked like—is magical. Some of the highlights include Temple of the Sun, the House of the Priest, the Sacred Plaza and the Intihuatana, an intricately carved rock most likely used as a sundial by the ancient Incans.

The ancient stone structures were built on the side of a mountain, and it is a mystery exactly how the Incas got the large stones up the steep terrain and through dense vegetation. But their architecture and engineering techniques are quite impressive; most of the walls were built by cutting stones to fit together tightly without any mortar.

If you can conquer a fear of heights, don’t miss hiking up a small portion of the 45-kilometer Inca Trail to the Sun Gate. From here, the vistas of the low-hanging clouds, the lush, emerald-green mountains and the ancient ruins are mystical and awe-inspiring.

Click Here to see all tour vacations in Peru from AffordableTours.com