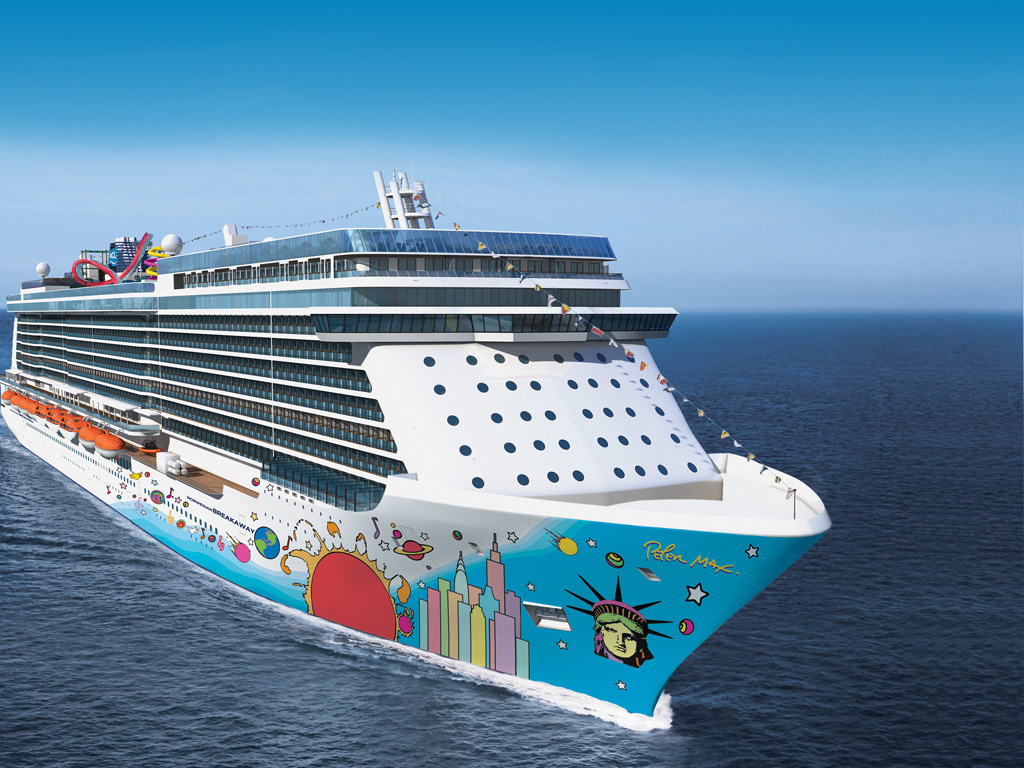 MIAMI – January 8, 2013 – Norwegian Cruise Line is starting off 2013 with a “bang” by announcing that Norwegian Breakaway, the line’s newest ship debuting this May in New York City, will feature an exciting fireworks show on every cruise.  The environmentally-friendly pyrotechnics display will dazzle guests on the second to last night at sea each week, after the ship departs Bermuda during her summer inaugural season.  Building on the electrifying theme of the ship’s headlining Broadway show, ROCK OF AGES, the awe-inspiring fireworks will be the grand finale of a decadent 1980s-themed deck party and will be set to a specially-selected playlist of classic 1980s hits by artists like Madonna, Devo and Prince.   “All the incredible entertainment and amenities on Norwegian Breakaway are going to wow our guests,” said Kevin Sheehan, Norwegian Cruise Line’s CEO. “We wanted one additional element that would really blow them away and this incredible fireworks show is going to take the cruise to a new level of excitement.”
As guests party the night away at the high-energy party under the stars in the open-air Spice H20 venue at the aft of the ship, they will be transported to the 1980s, where music and fun reigned supreme. In a breathtaking finale, a mesmerizing color-filled fireworks show will light up the night sky, right above the ship. The fully-produced show is a visual masterpiece that is set to a playlist of classic 80s hits including “Come on Feel the Noise,” by Quiet Riot; “Whip It,” by Devo; “Cherish,” by Madonna; “Final Countdown,” by Europe; and “Purple Rain,” by Prince.  As the fireworks blast to the beat of the music, guests will enjoy an experience unlike anything else offered at sea on New York’s ship.

The 4,000 passenger Norwegian Breakaway will arrive in her year-round homeport of New York City on May 7, 2013. The ship will begin weekly summer seven-day cruises to Bermuda on Sunday, May 12, 2013 and the fireworks will be held on the second to last night of the cruise, after the ship departs Bermuda.  From October 2013 through April 2014, New York’s ship will offer voyages from the heart of Manhattan to the Bahamas & Florida and the Southern Caribbean.

To date, the company has revealed the ship’s groundbreaking design, including The Waterfront and 678 Ocean Place; a wide range of indoor and outdoor venues on three dynamic decks that will create a whole new complex at sea that enhances guests’ connection with the ocean.  Norwegian Breakaway’s entertainment will include three Broadway shows: five-time Tony nominated ROCK OF AGES; the dance sensation BURN THE FLOOR; and CIRQUE DREAMS & DINNER JUNGLE FANTASY.  The famed comedy troupe The Second City, Howl at the Moon dueling pianos, and New York’s own Slam Allen will also perform on the vessel. Celebrity Chef and Food Network star Geoffrey Zakarian will also debut his first restaurant at sea on Norwegian Breakaway: Ocean Blue by Geoffrey Zakarian.

The top decks of Norwegian Breakaway will feature the first Aqua Park at sea with five full-size water slides, including twin Free Fall slides, the first ever at sea, and a three-story sports complex that includes the largest ropes course at sea, a nine-hole miniature golf course, basketball court, rock climbing wall and more.

The ship will also feature a rich mix of stateroom options including The Haven by Norwegian, comprised of 42 Suites at the top of the ship and 18 additional Suites located throughout the ship; the innovative Studios, designed and priced for solo travelers; the re-introduction of Oceanview staterooms, Balcony and Mini-Suites; along with Spa Balcony, Mini- Suites and Suites in close proximity to the spa.

Norwegian Cruise Line is the innovator in cruise travel with a 46-year history of breaking the boundaries of traditional cruising, most notably with the introduction of Freestyle Cruising which revolutionized the industry by giving guests more freedom and flexibility. Today, Norwegian invites guests to “Cruise Like a Norwegian” on one of 11 purpose-built Freestyle Cruising ships, providing guests the opportunity to enjoy a relaxed cruise vacation on some of the newest and most contemporary ships at sea. Recently, the line was named “Europe’s Leading Cruise Line” by the World Travel Awards for the fifth consecutive year.

Norwegian Cruise Line’s largest and most innovative Freestyle Cruising ship, Norwegian Epic, debuted in June 2010 and has been named “Best Overall Cruise Ship” by the readers of Travel Weekly two years in a row and “Best Ship for Sea Days” by Cruise Critic. Norwegian Cruise Line is the official cruise line of Blue Man Group, appearing for the first time at sea on Norwegian Epic, as well as the official cruise line of Legends in Concert, The Second City®, Howl at the Moon Dueling Pianos, and Nickelodeon, the number-one entertainment brand for kids. Cirque Dreams™ & Dinner is also featured on board Norwegian Epic as the first show of its kind at sea under a big top.

The Company has two 4,000-passenger vessels, Norwegian Breakaway and Norwegian Getaway, under construction for delivery in April 2013 and January 2014, along with one larger “Breakaway Plus” vessel for delivery in fall 2015.  Known as New York’s ship, Norwegian Breakaway will be the largest vessel to homeport year-round in the city, sailing to Bermuda for the summer beginning May 12, 2013.  Norwegian Breakaway’s features include hull art by legendary artist Peter Max, seafood restaurant Ocean Blue by famed New York chef Geoffrey Zakarian, and fitness classes and a retrospective display from the ship’s iconic godmothers, the Rockettes®.  The entertainment lineup includes three Broadway shows: Rock of Ages, Burn the Floor and Cirque Dreams™ & Dinner: Jungle Fantasy.  Norwegian Getaway, the largest ship to homeport year-round in Miami, will sail Eastern Caribbean voyages beginning in February 2014.  Sailings for both vessels are now on sale.