Switzerland is, no doubt, magical anytime of the year, however something about Switzerland during the Christmas holiday season is extra special. From the Lake Lucerne region in central Switzerland, to the majestic Swiss Alps, made famous by the Matterhorn, to all points in between, Switzerland with Insight is a destination worth visiting any time of year.

Our tour began with a one night stay in Lucerne, where we had a chance to meet our fellow tour participants during a Welcome Reception and dinner in our centrally located hotel. After breakfast the following morning, we had a walking tour of the city, and visited the Lion Monument, which was created between 1820-1821 to commemorate the Swiss Guards, who were massacred defending the Tuileries Palace in Paris during the French Revolution. Mark Twain was quoted as saying the sculpture was “the most mournful and moving piece of stone in the world,” when he visited Lucerne in 1880. After our city tour, our group opted to take an optional cruise along Lake Lucerne, which was a great way to get a different viewpoint of the city.

Later that day on our Switzerland with Insight trip, we departed Lucerne for our 2 night stay in St. Moritz. The scenic drive took us to Heidiland for a pit stop. This is an actual village where visitors worldwide come to find themselves transported back to the time of the story of Heidi. It was an unexpected surprise but very nice to see.

We arrived late in the day to St. Moritz and were astonished by the amount of snow that covered the entire town. We had dinner at our hotel that evening, and set out early the next day for the optional excursion on the Bernina Express train journey which has been declared a UNESCO World Heritage Site.

The Bernina Express took us on a scenic rail journey from Chur to Poschiavo, an Italian speaking town in the canton of Graubunden, which borders Italy. This excursion took us throughout many hairpin turns in the Swiss Alps, and along the way, we saw a few skiers and glaciers. It was a great way to spend the morning. 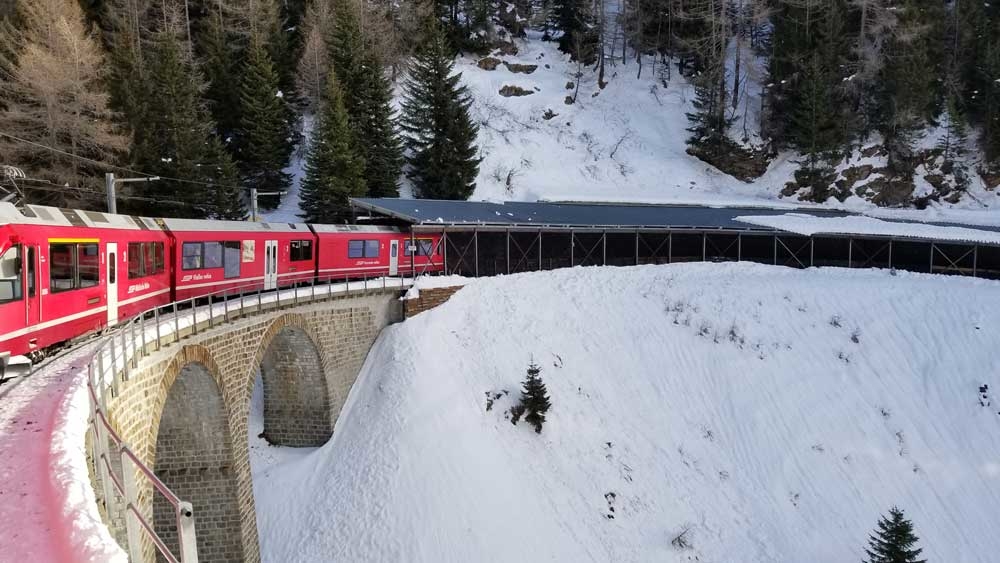 After our rail excursion, our coach driver picked us up and took us back into town for lunch. It’s safe to say that St. Moritz can be compared to Beverly Hills, but with a European flair, as the shops throughout the city were mainly high end. After lunch, we had a short break before returning back to our hotel and the optional horse carriage ride later that afternoon. The horse carriage ride was a very nice highlight of this tour. Riding through the forest and snow on our way to a remote hotel for light snacks and mulled wine, was a great way to end the day.

Related: Travel Beyond The Ordinary With Insight. View All Deals and Destinations!

Day 5 of our Magical Switzerland with Insight tour had us traveling from St. Moritz to Brig by a combination of rail (the world famous Glacier Express) and motor coach. We boarded the Glacier Express mid-morning, and had impressive views of the landscape, as we traversed through various tunnels in the Albula Pass. The Landwasser Viaduct (a single track six-arched curved limestone railway viaduct) was impressive and left everyone jockeying for positions in order to make sure we could get the best photos of the scenery, which ultimately, brought us to the Rhine Gorge with chalet style homes and snowy mountains. The Glacier Express train ride lasted about 6 hours and made one rest stop for us to go out and take photos of all the skiers in the area. We had a nice 4 course lunch on board, and arrived into Brig later that afternoon. Upon arrival to Brig we had time to rest up before enjoying our Christmas Eve dinner at the hotel. We had to rest up because the next day (Christmas) was the day that we would all visit the village of Zermatt and the world famous Matterhorn! 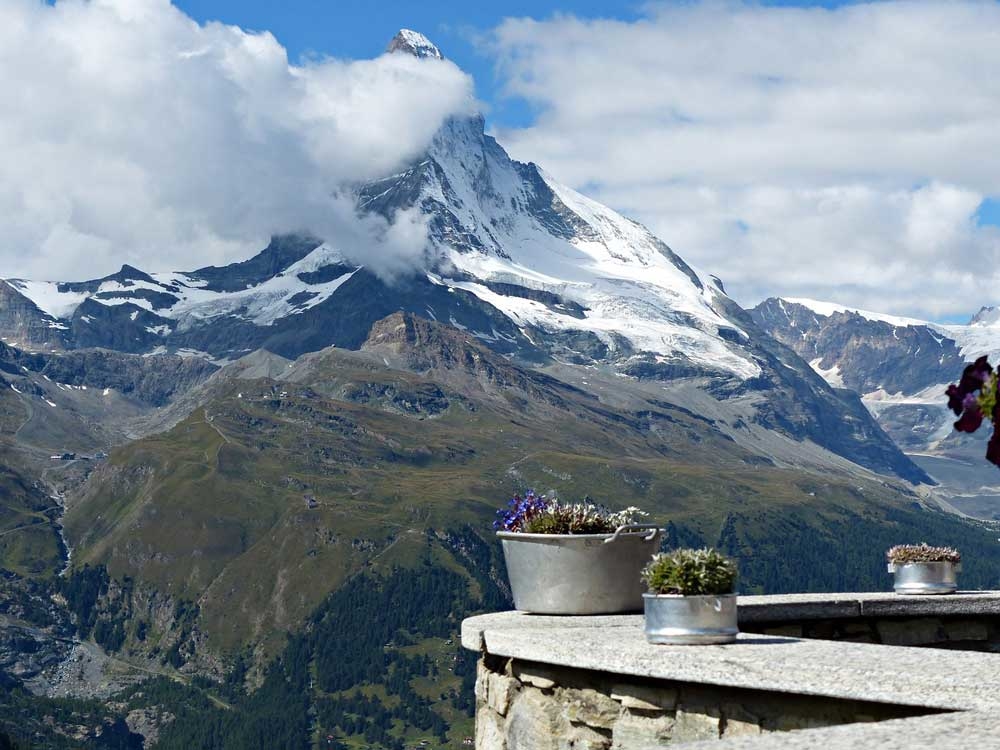 We left our hotel in Brig early Christmas morning for a ride to the town of Tasch. This is the location where you take a cogwheel train into Zermatt as no cars are allowed in the town. Upon arrival, our tour director had provided us with our tickets for the cogwheel train, which took us right to the heart of town. We took our group picture at the base of the Matterhorn with the church bells tolling throughout the region. It was a sight to see, and being there on Christmas Day made it even more special.

We also had a chance to go into the Ice Caves, which had numerous ice sculptures and piped in music. This was an unexpected surprise, as you would never think that one could go inside a mountain so high up in the Alps and hear music playing. Our day ended with free time to explore Zermatt on our own before heading back to Brig for a special Christmas dinner. This day was one of those “I’ll take to my grave” experiences which you never forget.

On our last full day in Switzerland, we took a journey along the Lower Rhone Valley to Lake Geneva, and visited the impressive Chillon Castle, which was the former home to the Counts of Savoy and the inspiration for Lord Byronâ€™s poem ‘The Prisoner of Chillon’. Our tour guide led us through the dungeons and different parts of the castle, and explained about life in the region during the Middle Ages.

After our visit, we had a brief drive into the town of Montreux for lunch and a visit to the famed statue of Freddie Mercury, who lived here. His band, Queen, recorded a total of seven albums at the Mountain Studios, and it was in this studio where the final album (Made in Heaven) was completed. You can visit the original studios located in the Casino Barriere de Montreux. Montreux is also home of the world famous Jazz Festival held annually in July since 1967.

We reached our final destination, Geneva, by late afternoon, and had a mini tour of the city which took us to the United Nations Building, the Old Town and the Reformation Monument. The city landmark (Jet d’Eau) could be seen from miles around and made for a great photo op along the banks of Lake Geneva. Our final evening together was spent having a celebration dinner with lots of fondue, and was a perfect ending to a truly magical trip.

I highly recommend Switzerland with Insight for a quick getawayâ€¦it offers so much history and culture, and you will want to return over and over again!