I recently took the Best of Morocco with Trafalgar Tours with two friends.

Our tour began with a drive up the coast from the bustling city of Casablanca to the capital city of Rabat where we had the opportunity to visit the Mausoleum of Mohammed V which contains his tomb and those of his two sons, King Hassan II and Prince Abdallah. Across from the mausoleum is the Hassan Tower which was designed by Jabir ibn Allah an astronomer and mathematician so also designed the Giralda of Seville. Both towers were inspired by the Koutoubia Mosque in Marrakesh and the site received World Heritage status in 2012 by UNESCO. 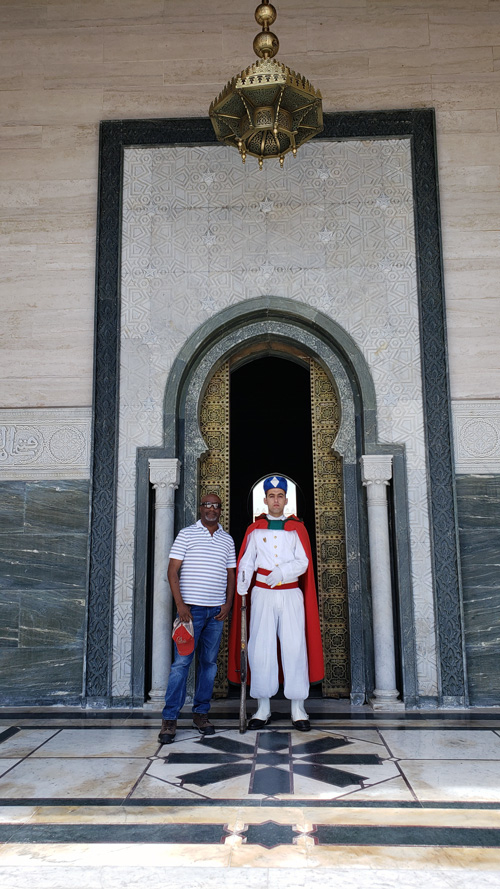 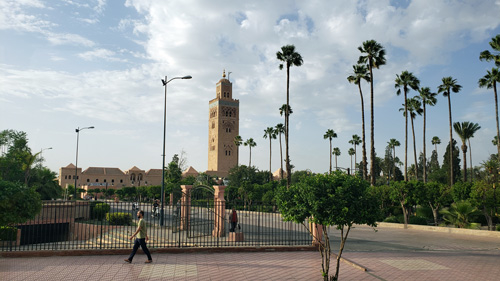 After our visit we continued on to the imperial city of Meknes. This is the sixth largest city by population and was founded in the 11th century as a military settlement. Meknes is home the iconic Bab Mansour Laleuj gateway with lavish ornamentation. We arrived later that afternoon in the imperial city of Fes for our 2 night stay at the five-star rated Marriott J’nan Palace.

Our third day on tour included a city tour of Fes and the Fes el Bali (medina) which has been listed as a World Heritage Site by UNESCO since 1981. The medina has a total population of 156,000 with over 900 city streets and alleyways. The medina was founded by the Idrisid dynasty between 789 and 909 AD making it the oldest part of the city. The University of Al-Karaouine (est. 859 making it the oldest university in the world) is also located here. After our sightseeing tour of the media and a few shopping adventures most of our group decided to book the optional excursion to the Bhalil village where local people live in cave dwellings which was a real eye opening experience. We had a special Be My Guest dinner that evening overlooking the city at the Riad Al Makan.

Our group traveled via the Middle and High Atlas mountains the following day past numerous casbahs en route to Erfoud, an oasis town in the Sahara Desert. Erfoud has been a filming location for many films including The Mummy, Prince of Persia and Spectre. We had a special treat this evening as those of us who chose to do the optional excursion were taken deep into the Sahara Desert for an off riding 4×4 experience to the sand dunes where we then had camel rides through the Sahara just in time to catch a very beautiful African sunset.

Day 5 of our Morocco With Trafalgar tour found us driving through various oasis towns. We drove through part of the Todra Gorges which are a series of limestone river canyons in the eastern part of the High Atlas Mountains on our way to the Dades Valley. Our hotel for this evening was the Xaluca Dades located high on an overlook surrounded by beautiful views of the Atlas Mountains. 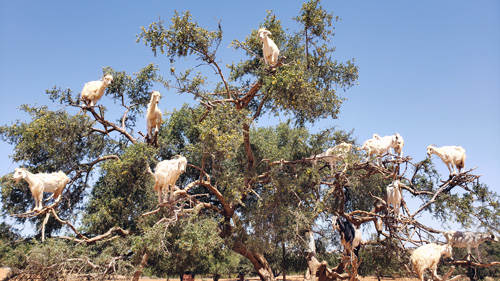 After an early breakfast we set out for Ouarzazate in south-central Morocco. The town is inhabited mostly by Berber speakers who constructed many of the most prominent casbahs. Ouarzazate is known as the Hollywood of Morocco for the many films shot there such as The Mummy, Cleopatra, Lawrence of Arabia, The Last Temptation of Christ, Gladiator and part of the Game of Thrones TV series. Our destination for this evening however was Marrakesh where we would spend 2 nights at the centrally located Le Meridien N’Fis. Upon arrival in Marrakesh we had an optional dinner in the medina with lively entertainment and a nighttime horse & buggy ride back to our hotel.

A few of us decided to book the excursion to the Majorelle Gardens and Saadian tombs the following day. The Majorelle Gardens is one of the most visited sites in Morocco and took French painter Jacques Majorelle 40 years to create. The gardens covers about two and a half acres and is full of exotic trees and plants with a memorial to Yves Saint LaurentÂ who owned the property for over 20 years. His ashes were scattered here in 2008. The Saadian tombs were also a highlight of this day. These tombs (located on the south side of the Kasbah Mosque) were rediscovered in 1917 and contain about 60 members of the Saadi Dynasty which ruled Morocco from 1549 to 1659 in the mausoleum. The graves of the soldiers and servants are found outside gardens. Â We had an orientation tour of the Bahia Palace later that morning and an entire free day to spend as we pleased.

We traveled to Essaouira (formerly known as Mogador) the following day which is a laid back city on the Atlantic coast. The Sqala du Port and the Sqala de la Kasbah are two fortifications built in the 18th century for the protection of the city. Essaouira offers several small art galleries throughout the town and has held the Gnaoua Festival of World Music since 1998 bringing together artists from all over the world and is known as the Moroccan Woodstock. Tagart beach with its fine dunes was the perfect location for some rest and relaxation prior to our drive back to Casablanca the next day. 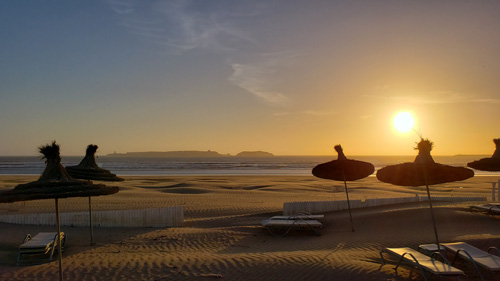 Our last day in Morocco with Trafalgar was spent back in Casablanca where we visited the very impressive Hassan II Mosque. We had a tour of the city prior to returning back to our hotel for our farewell dinner. 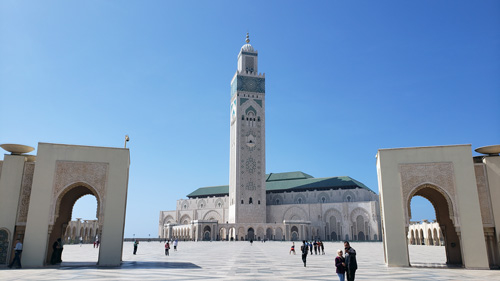 I highly recommend the Best of Morocco with Trafalgar Tours for the first time visitor to this exotic country. The people you’ll meet and the experiences you’ll have will without a doubt make you want to return to Africa to experience more that this continent has to offer.

Read More Reviews Of Best of Morocco With Trafalgar.