My wife and I decided to take the Viking Rhine Getaway from Basel to Amsterdam, an 8 day trip with 2 post nights in Amsterdam. We’re both in our early 40s which made us among the youngest travelers on the boat.

Our taxi let us out at the port, where we were promptly greeted by a tall gentleman with an umbrella. Devin was the Tour Coordinator and for the next several days provided us with any bit of tour information we needed, and provided us with several laughs and many games in the lounge after dinner and into the night. Once we boarded the ship, our Rhine Getaway with Viking trip took a turn for the best. 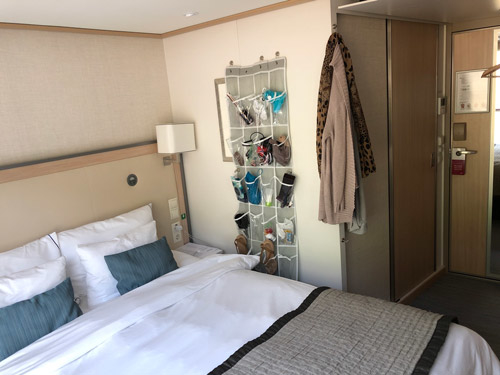 The Hotel Manager Holger also made the stay special by talking to all of the guests about stories from his travels. The ship’s captain Michael finalized the triumvirate and managed to get us everywhere safely and exactly on time. All of the ship’s employees went beyond expectations in making us feel at home for a few days that we were on the ship.

Day 2: We took the included Black Forest trip in the morning and visited the village of Colmar in the afternoon for the additional excursion. This being our first day out on the trip, there was a lot to look out as we traveled to our destination. The tour guide did a great job explaining everything as we passed, from the vineyards on the hills to the white asparagus the area is famous for. 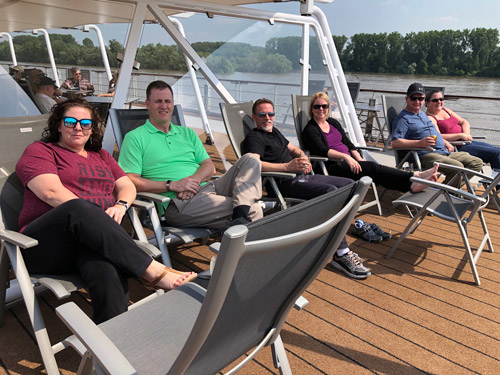 About half way to our destination, we began a long climb up through a valley into the mountains of the Black Forest. The ride can be disorienting on the bus with the twists, turns, and cutbacks as you approach the top of the hill and ride along the spine. That day, the rains had caused a fog to appear midway through the climb until we drove high enough that we were actually over top of it. The destination was a quaint little area nestled in the hills. Demonstrations with glass blowing, cuckoo clock making, and Bavarian cake eating were very entertaining.

Later in the day we visited Colmar. We hopped on a tram shuttle where a tour guide took us through a tour of the city. The tram is the only way to see as much of the city as we did in so short of time there. The fresh air was a welcome departure from the earlier long bus ride to the Black Forest. The architecture of the buildings really allowed the city to stand out, along with the rich diversity of the different cultures that live there. After the train ride was over we walked about the city for an hour or two on our own and met up with the rest of the cruisers to go back to our floating home for the week.

Day 3: We went to Strasbourg for the included tour in the morning and stayed in town for the remainder of the day once the tour concluded. The tour rightfully starts at the entrance to the city, where the river and canals form into a beautiful picture taking opportunity. 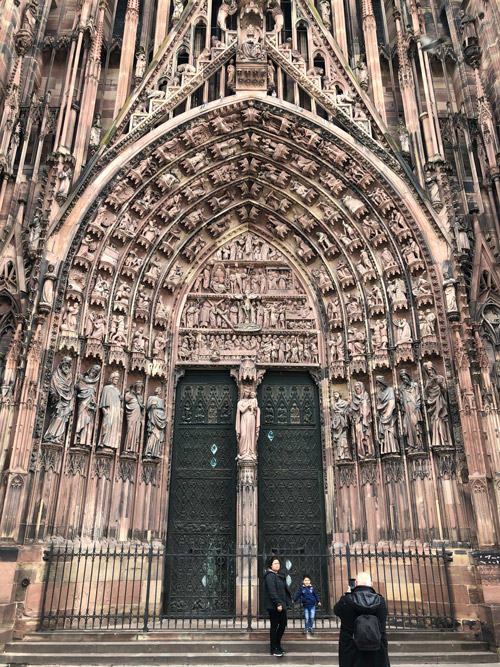 As you stroll through the city, you start to feel like you could move here and just live in the streets and eat at a different pub or restaurant each day of the week. There were street fairs, local vendors, and free samples as we walked through the streets to the Strasbourg Cathedral. This was the first (of many) massive cathedrals you will see on tour. The workmanship that goes into these inside and out can only really be appreciated when you are in front of the building. As you look at the church as a whole, and then peer down to the tiniest of details to realize just how long one item takes to craft and there are hundreds of thousands of them there. 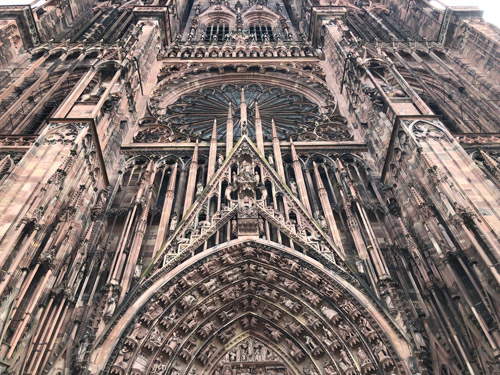 We found our friends after the tour and stayed in the city for the day. We had lunch at L’Oignon which served authentic foods, but were not much to our liking. Our group even started making onion jokes for the remainder of the day to my wife as a result of our selection of foods that afternoon. After some considerable walking and shopping, including several street vendor fairs, we sat outside of the restaurant Maison Kammerzell with two bottles of wine next to the church until the afternoon bus came back to pick us up. This is when we really accepted the best part of being in Europe on our Rhine Getaway with Viking was sitting around drinking in open squares, watching people, and talking to new friends. On the way to the bus, there was an interesting bronze model of the city.

Related: View More Reviews Of The Rhine Getaway with Viking! 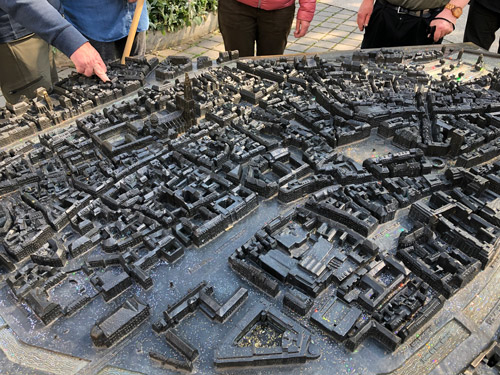 Day 4: We visited the college town of Heidelberg where we were able to view the Heidelberg Castle and some amazing views over the city in the morning. 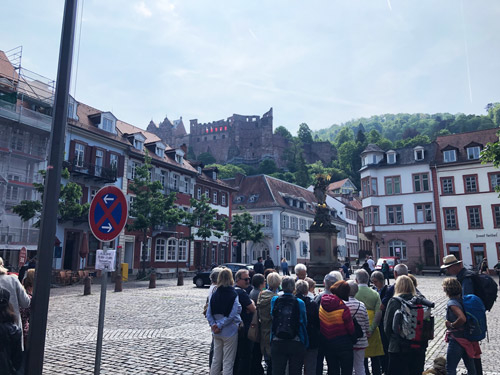 The landlords of the castle really appreciated people paying them for protection in the form of wine, so they needed something larger to hold all of their “income”. 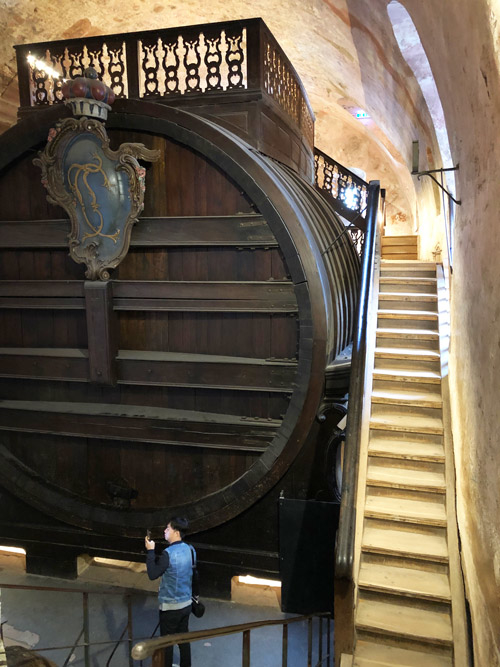 Afterwards, we made our way down into the city for some lunch where I was able to discover Currywurst for the first time! The city felt like a college town atmosphere with a main street of vendors, several side-streets containing confectionists and breweries. 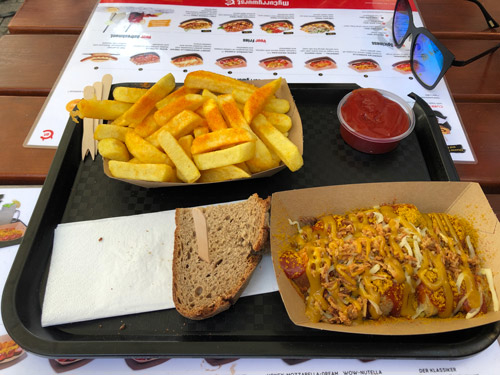 While we were off the ship, it continued onto Rudesheim where we met up with it later in the day. It was amazing to see the number of vineyards on the steep, mountainous hills in Germany. There was an optional excursion to dine out but we decided to eat on the ship instead that night. Rudesheim offered a quiet night out on the town for us to do as we chose but by the time we left the ship almost everything except for the restaurants had closed for the night. 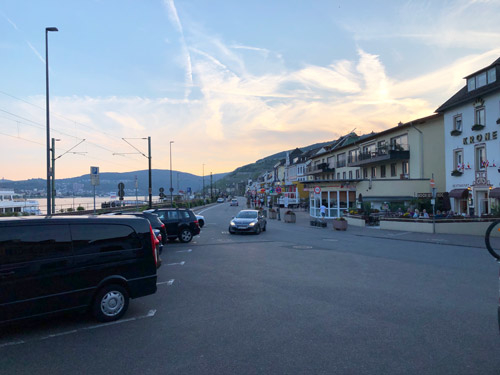 Day 5: We sailed up the Rhine during the day to view more castles and churches on the hillside as we sailed. Once we arrived in Koblenz, we took the optional tour of Marksburg Castle.

The castle itself is on top of a high hill that does take some time to walk up. Once in the castle, the stairs are carved into the existing rock and can be difficult to move on for someone without sure footing, especially on a rainy day. Everything there was in great shape as the castle had never been destroyed. You could certainly see why as you curled around the outside of the castle several times before making your way inside of the residence. 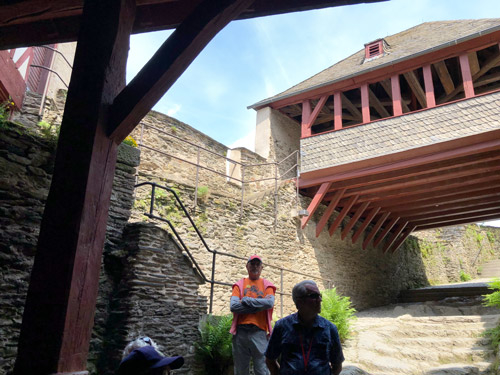 After walking the castle for the day, we decided to go out with our friends in Koblenz viewing the city. We ended up eating at Konig Pilsner after a difficult time deciding where the 6 of us wanted to eat after a long day. Many of the potato based dishes ended up hitting the spot and went well with the beers on draft there.

We finished up the evening right next to the boat at Königsbacher Biergarten. A large outdoor patio with several good looking beers on tap and some other delicacies. Here we watched the sun go down, and after a beer or two took a quick 5 minute walk back to the ship. 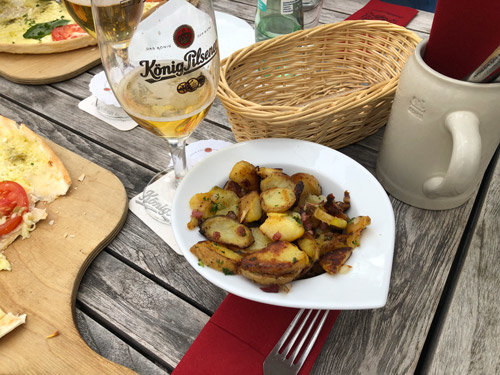 Day 6: We took the included Cologne Walking Tour in the morning on our Rhine Getaway with Viking . We happened to be there on a Saturday when we realized many other German’s also visit the big town to have a little fun. Among the cathedrals and churches were also several bachelor and bachelorette parties roaming the streets getting started early for the day ahead! The cathedral was once again amazing to look at and hear the stories of its ongoing completion process. We decided to stay in the city afterwards with our cruise friends and enjoy a wine festival that was going on. We all took a few bottles back to the ship for a budget friendly $5 per bottle. There really are a lot of vineyards in the area with delicious grapes. On the way back, we crossed the Love Locks Bridge 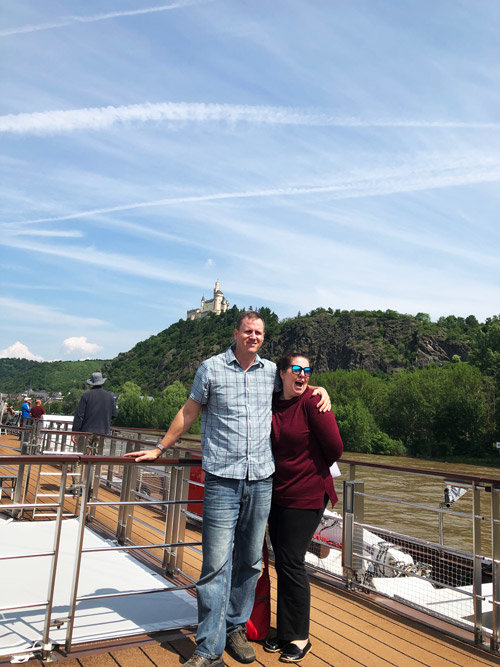 In the evening, we went on the Beer Culture & Dinner. Meals, bands, and lots of Kölsch were found that evening at Peters Brauhaus, Brauerei zur Malzmühle, and somewhere else I cannot remember! The small glasses of fresh Kölsch were carried around in sets of 20 for quick refills. We even managed to make the tour guide late getting back to the bus in our never ending quest for more taverns that night.

In the evening, we went on the Beer Culture & Dinner. Meals, bands, and lots of Kölsch were found that evening at Peters Brauhaus, Brauerei zur Malzmühle, and somewhere else I cannot remember! The small glasses of fresh Kölsch were carried around in sets of 20 for quick refills. We even managed to make the tour guide late getting back to the bus in our never ending quest for more taverns that night.

Day 7: After sailing for some of the morning we made it to the Kinderdijk windmills. This was easily our least favorite outing on the trip. I think the information was interesting, but seemed to be largely repetitive once we saw the windmill and understood the functional purposes of the dikes in Holland. Also, at this point we had visited so many wonderful cities and had tasted so many good beers, and none of those things made it to this more informative tour on how Holland manages to stay above water. 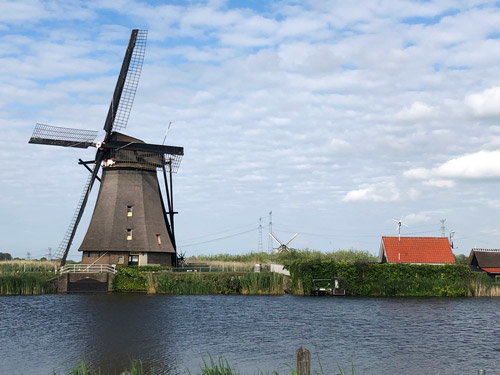 Day 8: Our final day aboard the ship. We left the ship in the morning with a taxi arranged by Viking to take us to our own post-ship plans for two nights in Amsterdam. We were sad to leave the comfort of our floating home and all the characters we met on board. I’d highly recommend the ARTIS Amsterdam Royal Zoo. We have a great zoo in Houston, but this zoo felt largely more interactive with walk-throughs in the monkey house, kangaroos, and a dancing porcupine (YouTube it!). We visited the Red Light district during the day which is harder to find than it is during the night! The Anne Frank House is also a must visit but make sure you get your tickets weeks to months in advance or you will not have many times to choose from.

The whole Rhine Getaway with Viking experience was truly amazing. We’ve never been on a river cruise before this, but we couldn’t imagine taking any other type of cruise in the future now either without using this trip as the benchmark for an unbelievable experience well worth every penny!