Winter time is a great time to flee the cold and enjoy the wonderful weather of the Caribbean. Cruise prices are typically low between Thanksgiving and Christmas so I decided to escape to the Western Caribbean with Carnival onboard the Carnival Vista. Houstonâ€™s proximity to the Port of Galveston makes it easy to drive to the ship in less than an hour.

I chose the Carnival Vista because of the positive reviews I read as well as my own research. Iâ€™ve cruised on a variety of cruise lines, but the Western Caribbean with Carnival on the Vista seemed to really offer a lot more than I remember being available on any other cruise ship. One thing in particular that I really wanted to experience was their Thrill Theater 3-D. Iâ€™ve never seen that on a ship and I was intrigued.

Embarkation was smooth â€“ from arrival until I was on the ship was only about 20 minutes. Before long, I was onboard and headed to my stateroom. I booked a Spa Inside room which was new for me. By upgrading from a regular inside room, I was granted access to the Cloud 9 spa thermal suites, had upgraded bathroom amenities and received two complimentary fitness passes for yoga classes, discounts off spa treatments and a few other nice touches. More about the spa in just a moment. 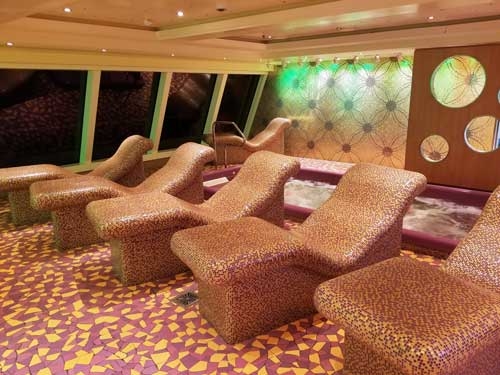 Over the course of the week, there was no shortage of succulent food options. Iâ€™m confident I didnâ€™t lose any weight while I was onboard. Some of the most popular places for food were Guyâ€™s Burger Joint where they give you a plain burger with French fries and then you dress up your burger at a toppings-bar. Besides the traditional lettuce, tomato, mayo, and ketchup, they offered jalapenos, ranch dressing, chopped bacon and a host of other garnishes for your food â€“ I never had the same burger twice. 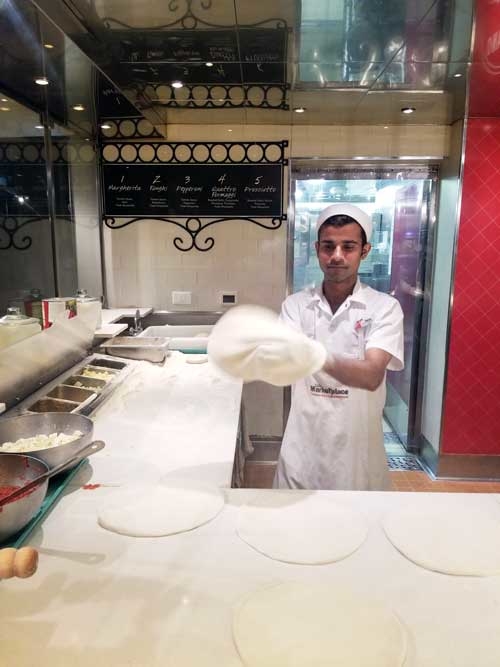 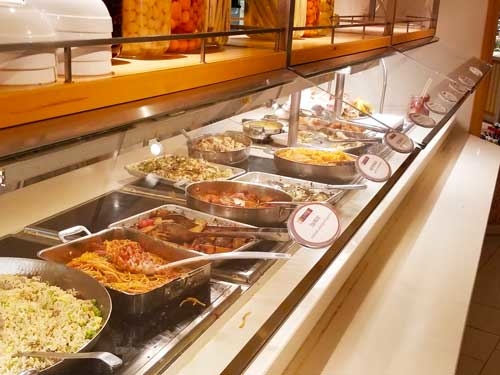 Along with the traditional Lido restaurant, they also had a Deli which featured some of the best sandwiches I have ever had onboard a ship. These sandwiches were pre-made and then just put into the over to heat them up and toast the bread. I ordered a meatball sandwich that was smothered in tomato sauce and then buried under provolone cheese â€“ it was one of the best snacks I have ever had onboard a cruise. The Lido restaurant was my go-to for breakfast where they served all of my favorite breakfast foods (I only eat waffles on a cruise â€“ if I had a waffle iron at home, I would eat waffles for every meal.) They also had a smorgasbord at night that rivaled what they served at lunch. Not to mention the 24-hour ice cream machine.

During the day, there was always something for everyone. From the very young to the young at heart, everyone seemed to be doing exactly what they wanted. 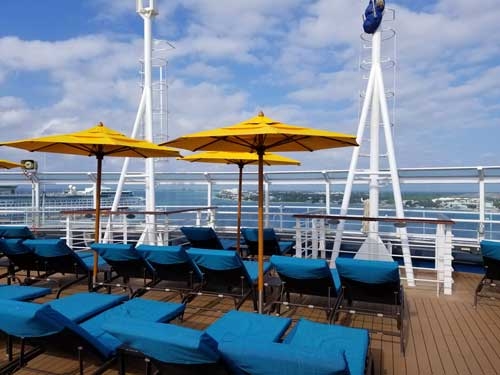 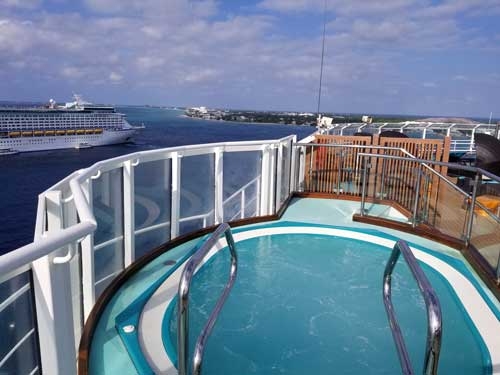 It was the quietest spot on the ship which was ideal for basking in the warm sun and meeting fellow travelers. The ship also features three swimming pools, a large movie screen over one of the pools which played an assortment of familyâ€“friendly movies each day, a ropes course, and an amazing water park for kids. 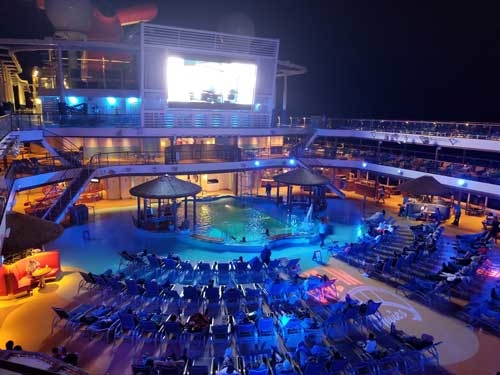 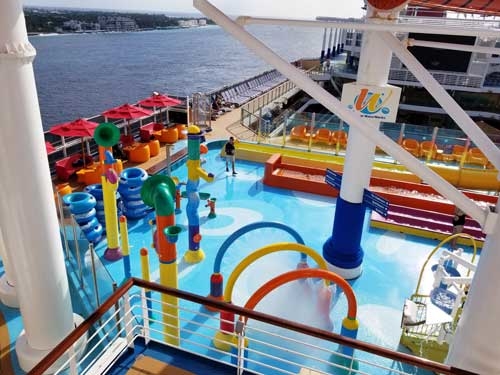 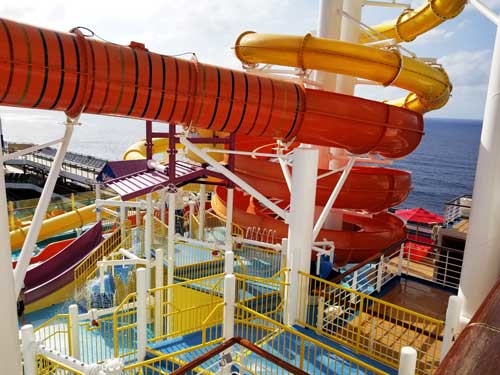 Our first stop on our Western Caribbean with Carnival was Cozumel, Mexico. I chose to do an excursion where I rented a jet ski and skimmed across the smooth blue Caribbean water to a private beach area. The trip was only 15 minutes but the warm water, temperate sun and light winds were a great way to start the day. Once on the beach, lounge chairs and umbrellas were available. There was also a bar with beverages available for purchase. After soaking in the sun, it was time to head back to town. Upon arrival, I headed to one of my favorite restaurants, Panchoâ€™s Backyard. I was craving the authentic Mexican cuisine for which Cozumel is famous. I lost my sunglasses in the water when I was on the jet ski so I stopped in a shop and bought some temporary sunglasses. The exchange rate was excellent so the price tag that said â€œ100 pesosâ€ amounted to only $6.

The next day I was in Grand Cayman. Their claim to fame is Stingray City where stingrays have been hand-fed by local fishermen for many decades and now those curious stingrays approach people in the water hoping to get a snack of cut-up fish. I hadnâ€™t been there in a few years, so I decided it was time to go back. If youâ€™ve never been in the water with stingrays, it can be a little intimidating. You can see them below the water, but itâ€™s kind of difficult to see what theyâ€™re doing unless youâ€™ve got snorkel gear. I try to keep my feet off the ground so I mainly snorkeled and watched my fellow guests squeal with delight at the chance to pet, hold and take pictures with a stingray. Upon return to the island, I made my way to the Rum Cake Store for some key lime rum cake. All rum cakes are delicious, but the key lime flavor puts a tart twist on the traditional cake. Itâ€™s by far my favorite flavor. 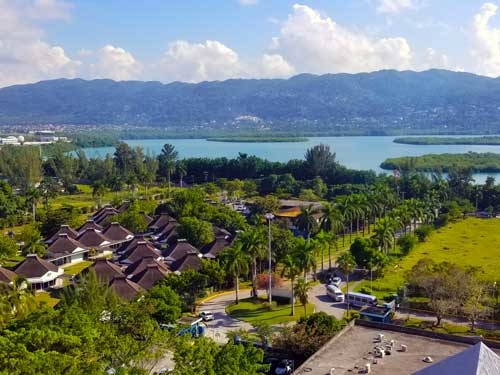 Our final port was Montego Bay, Jamaica. The island is so beautiful and green with rivers, jungles, waterfalls and mountains. I decided to get away from the ocean and did an excursion that headed inland to Dunnâ€™s River Falls. The waterfalls are beautiful and the tour offers an option for participants to link arms and form a human chain to walk up the side of the waterfall (instead of just gazing at the pools at the bottom of the waterfall.) I, however, chose not to do this. Iâ€™m not a link-arms type of person. Instead, I waded through the pools, hoisted myself over the intermittent retaining walls, through the next pools, and repeated the process until I was actually at the base of the waterfall. Itâ€™s a gratifying workout and not for the faint of heart. Itâ€™s definitely more of an adventure than linking arms, though. Afterwards, we went into town where I scored a deal on several bags of Blue Mountain Coffee for souvenirs for my friends back home.

Evenings onboard the ship on our Western Caribbean with Carnival were just as eventful as during the day. I ate in the dining for dinner every night at 5:30 pm. Dinner lasted about an hour and afterwards I had a routine of going back to my room and changing into my swimming suit and heading to the spa to use the thermal suites. There was a hot tub, two different types of saunas and two different types of steam rooms. It was a nice way to relax and unwind while meeting other cruisers. I was usually done by 8:30 pm so I would go back to my room before heading out to the public areas of the ship.

Each night there was something going on â€“ two of the highlights were the theme nights. The White Party was essentially a dance party where everyone dressed in white. The shipâ€™s DJ did an excellent job of playing fun songs that most people knew and he kept the dance floor hopping. The 80â€™s Glow Party featured music favorites from the 80â€™s but guests were also provided with glow necklaces, Styrofoam batons with flashing lights inside and drink glasses with flashing lights in the base. It kind of reminded me of high school so it was a cool flash back. Again, we danced and danced and danced until the wee hours of the morning.

I managed to get to the Thrill Theater 3-D two times. There was a $5 admission charged to my onboard account but it was well worth it. One 3-D movie I saw was a condensed 15-minute version of Polar Express. If youâ€™ve ever seen the movie, there is a scene where there is a runaway train. As it goes up and down hills on its track, itâ€™s more like a roller coaster. In the Thrill Theater, in addition to wearing 3-D glasses which create optical illusions, the seats tilt, twist and bump to give you the feeling moving in sync with the train. But to liven things up, there were also fans blowing cold air to make you feel like you were really outside the train! 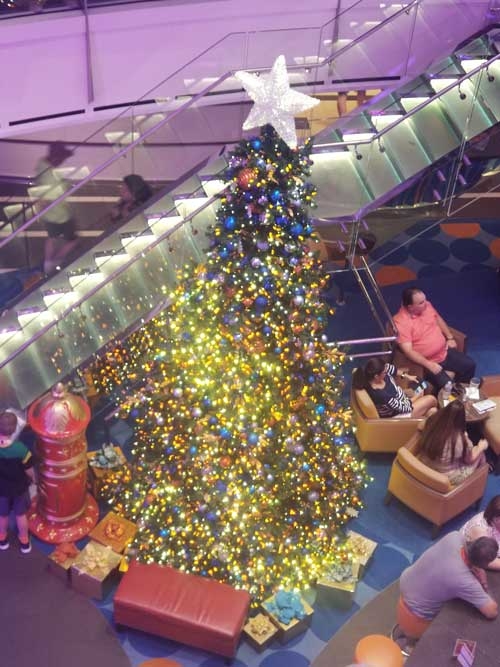 One reason I continue to cruise on Carnival is the service. My cabin steward was all smiles every time I saw him and he made my stateroom look like new every day. The bar staff on my Western Caribbean with Carnival cruise always called me by name and remembered I like a lime with my diet Coke. My dining room servers knew all about what was being served, made special requests on my behalf, and delivered service with a smile. The staff always made me happy with our daily interactions.

Iâ€™m looking into my trip for next year â€“ I might be going back on the Vista because it does multiple itineraries. Next time I could be going to Belize, Honduras and Cozumel. Keep an eye out for that report in late 2020!