On my Wonders of Ancient Egypt with Trafalgar tours, I had traveled so far it seemed with one main expectation, and that was to see the one of the seven Great Wonders of the World.

At such a remote distance, we could see the Ancient Giza Pyramid, the oldest and only one still in existence, dating back from and the Reign of King Khafre in all its immense grandeur. This was the sort of thing that we read about in literature from around the world, but nothing compared to the sight of this towering monument made by the ancient Egyptians. 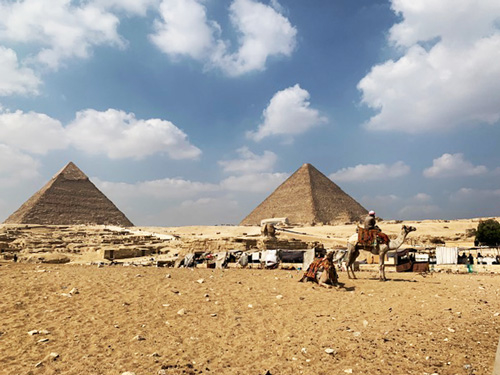 As the great majestic Sphinx guards the pharaohâ€™s tomb, I simply thought this had to be greatest, unmatched amazing architectural sight I would see. Little did I know how wrong I was! 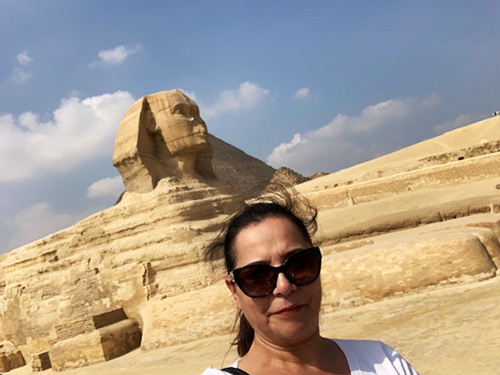 As we traveled to the Temple of Karnak, I wanted to only stay and gaze towards the heavens as the Egyptians must have done as the great colossal columns seemed to have no end. I had to ask myself, how could this be possible?Â 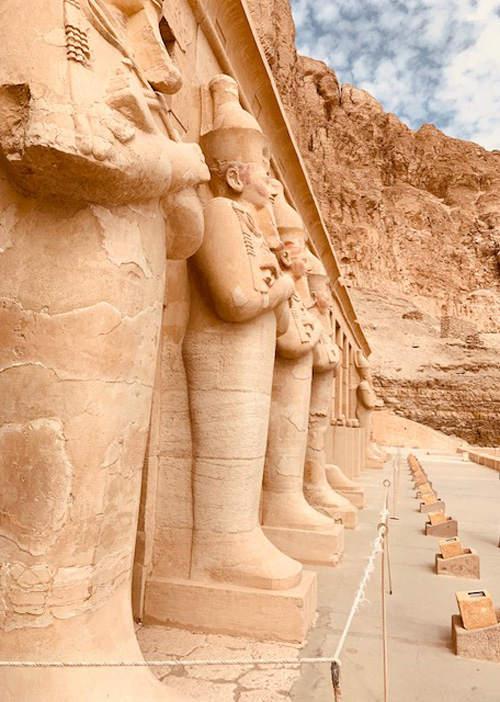 The sheer beauty, after thousands of years, still stood the test of time. The detail in the art and the writing on the columns; oh what a story that had to tell! 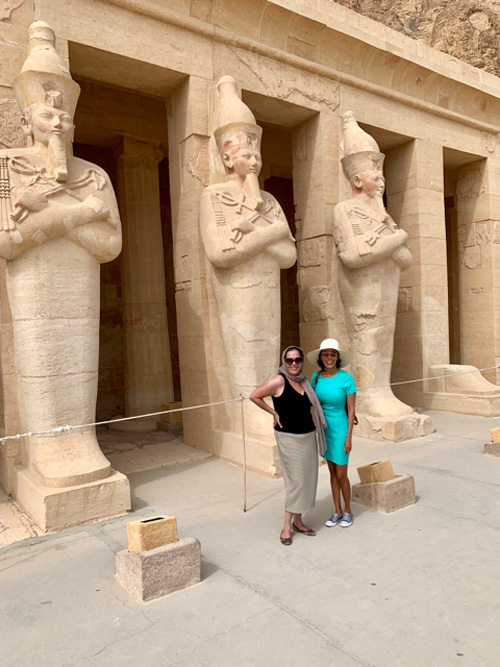 As night fell, we settled in our ship I decided to wander to the upper deck for the view of the Nile River, whose mere existence made it possible for the Egyptians to survive for thousands of years. As we traveled down the river, we could witness many temples and pyramids along the beautiful vast mountains of the desert that seemed to never end. In my mind, I could see the people in ancient times at the river to gather water. The people here were so happy to see us, and I had to smile to myself as the children ran along the river banks to wave with such excitement.

As we cruised the river, I was fortunate enough to meet such great people. Soon, a rather large card game began, and I never laughed so hard! I cried! 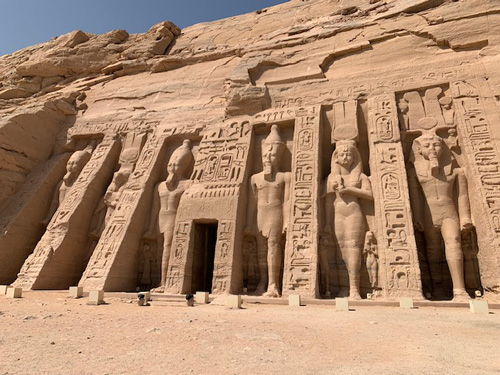 Among our destinations were the Dendera and Isis Temple and the House of Horus. This is something that has to be witnessed, to actually breathe in the beauty that took decades to make. These were temples that were erected in honor of their Gods. 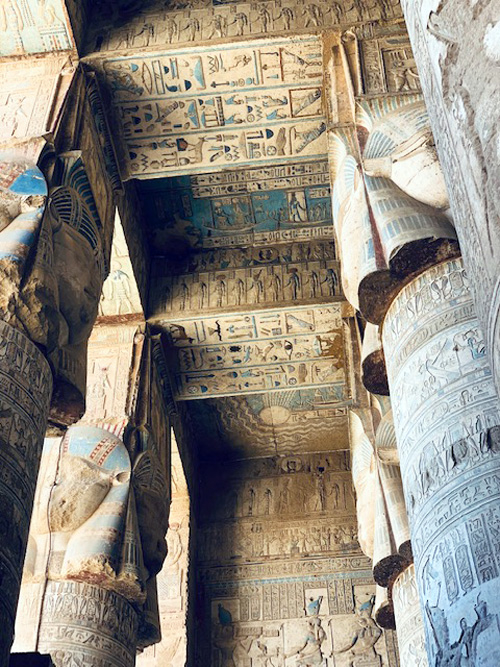 Nothing was too great or too impressive. The walls and ceilings still held so much beauty, still in color. The walls told a story of how the Gods came into existence along with the story of the lives of the gods. 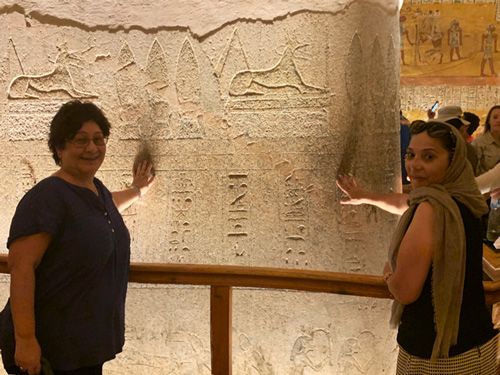 The guide helped us to understand the strong faith of the ancient Egyptians in their Gods and the lengths they would go to in order to show them honor. The guides were beneficial in helping us understand their way of life their strong beliefs as if telling us their story from beyond. 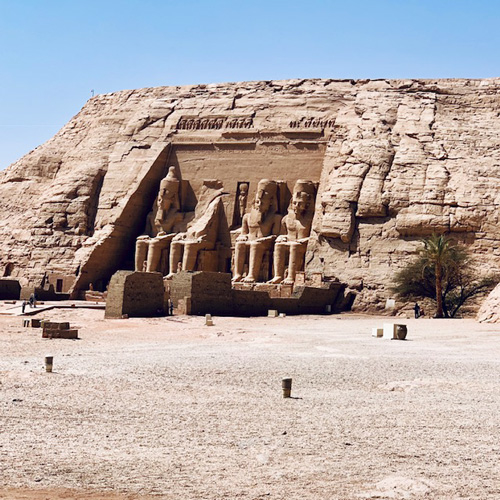 Later, we celebrated their culture with dinner and that seemed to throw us back in time, if only for a while. The magnificence of the Temple of Abu Simbel and his wife Nefertiti from centuries ago, was remarkable. This was such precise and architectural work from the ages with a breathtaking sight. The amazing journey continued with nothing less than the astonishing Valley of the Kings. One cannot put into words the work and struggle of 500 years of rock and tombs excavated for the mighty pharaohs. 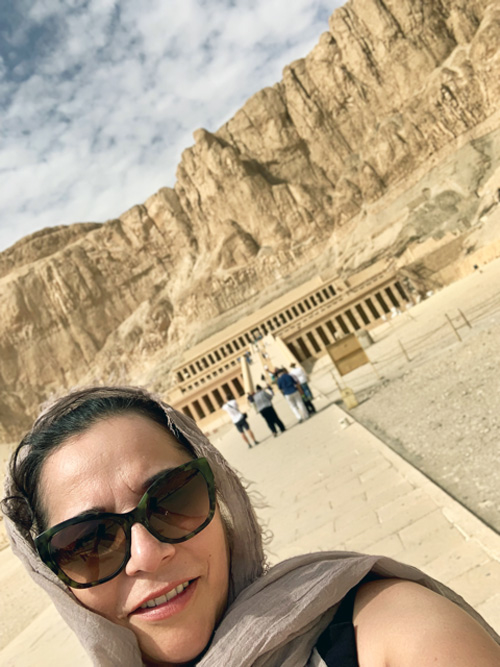 As you enter the sacred tombs depicting scenes from Egypt mythology and learning of their burial rituals and beliefs for their powerful kings. To the tomb of the famous boy king, young King Tutankhamun. I stood back in awe in the valley at the vast mountains that held so much hidden knowledge. Nowhere in the world could hold this much History in one country. The ancient Egyptians lived their whole lives in preparation for the afterlife. They prepared for centuries and generations for their deaths so that they would have everything organized for their journey to the afterlife to see their gods.

Our guide was not to be outdone upon entering the Cairo museum. To appreciate so many artifacts, tombs and sacred mummies and their meaning, along with the treasures of King Tut. The beauty of the art depicted in the tombs of the pharaohs cannot be matched. 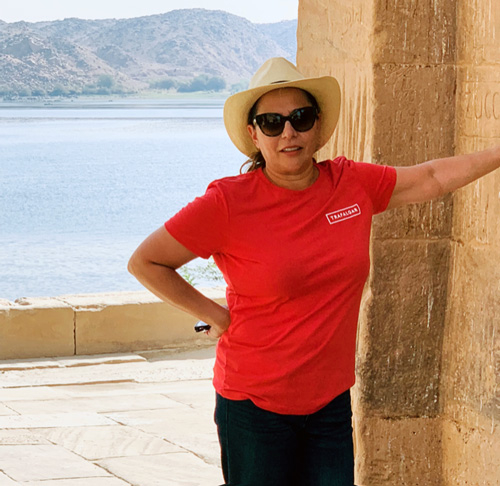 Wonders of Ancient Egypt with Trafalgar was a once in a lifetime experience that cannot be found anywhere else. A true trip to be remembered in a life that the ancient Egyptians left for us still intact and withstanding time in all its beauty.