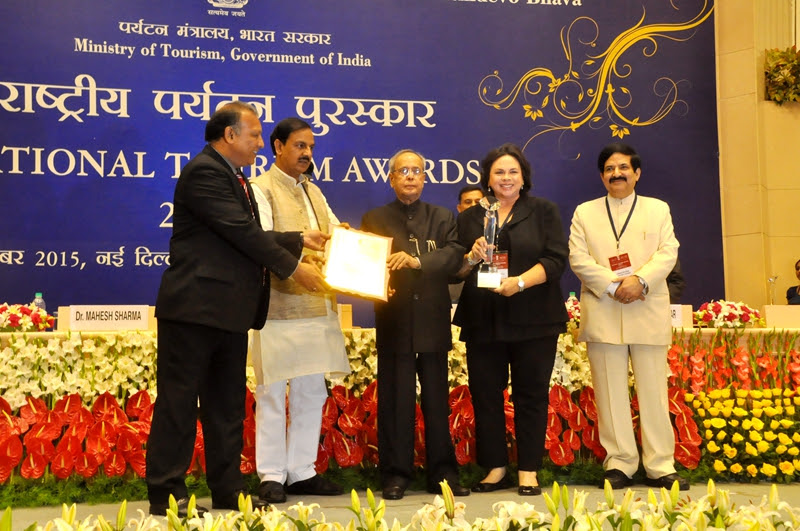 Los Angeles – (Sep.28, 2015) SITA World Tours proudly received a top honor in the travel industry last week. In an exclusive ceremony held by the Ministry of Tourism, Government of India on September 18, 2015, SITA was awarded the ‘Best Overseas Tour Operator to India from North America’ award for 2014. The prestigious award was presented to SITA World Tours by the President of India (Shri Pranab Mukherjee).

Each year, a committee formed by India’s Ministry of Tourism, selects Tour Operators from all over the world based on their performance in the promotion of India as a destination. After a careful selection process, the winners are formally announced at the National Tourism Awards Ceremony held at the Vigyan Bhavan in New Delhi, India. According to the Ministry’s guidelines, awards are given to various segments of the travel and tourism industry, in recognition of their outstanding efforts in their respective fields.

In addition to the President of India, the ceremony was attended by Dr. Mahesh Sharma, Minister of State for Tourism and Mr. Vinod Zutshi, Secretary of the Ministry of Tourism, as well as others from the Tourism sector and Travel Industry worldwide.

On hand to receive the special award was Laudie Hanou, SITA’s Vice President and Max Ali, Director of Group Operations. Mrs. Hanou, stated, “It is a great honor to be recognized again by the Ministry of Tourism India and to receive the award from President Mukherjee himself. It is SITA’s fifth national award from India and it truly underscores our commitment to the destination from the Americas”.

Owned and managed by Mr. Mok Singh, Group President and Mr. Roger Mahil, Chairman, SITA World Tours USA had previously won in 1997/98, 2005/06, 2007/08 and 2012/13. The company was one of the first tour operators in the United States and Canada to create and sell packages to India. Specializing in deluxe and luxury touring, both packaged and tailor-made/customized programs are offered for India and beyond, including Asia, Africa, South & Central America and Europe. With the new e-Visa process for travel to India out of North America, taking a journey to incredible India has become easier and more affordable than ever.

Coinciding with the National award is SITA’s 83rd Anniversary in providing excellence in travel.