…And we’re back to talk more about my latest trip to the South of France! Read Part 1 if you missed it! 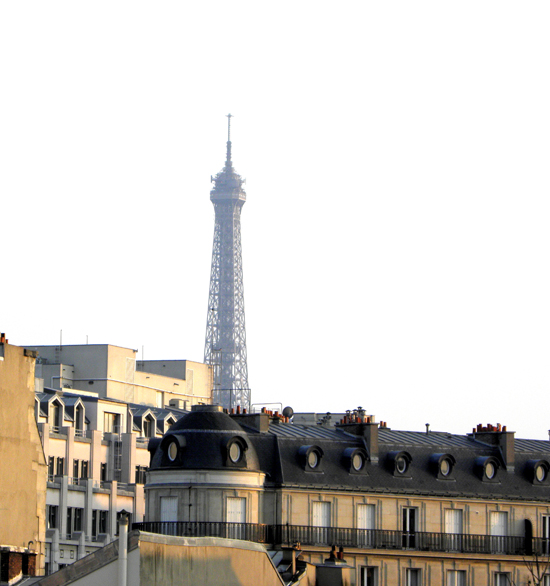 Finally, another rarely visited area by non-French folk is a little treat called the Viduct des Arts. This was my first visit here, and it was joyous, including the walk upstairs on the Promenade Plantee! To get here, go to Metro Bastille. Find the HUGE new Opera house when you come out of the metro station. Walk down the right side of the new Opera house (you’ll see a sign pointing to the Viduct des Arts), and shortly, you’ll be strolling along the shops with the Promenade above you. There are a couple of entrances with elevators to the Promenade to avoid the two steep staircases! The history:

Paris-Strasbourg Railway Company began service on a line that required elevated tracks from the Place de la Bastille to the eastern reaches of Paris. The railroad’s brick-and-stone viaduct carried suburban trains until the 1970s, when newer SNCF long-distance routes and the new RER “A” commuter line made it redundant.

In the early 1980s, city officials debated whether to tear down the old viaduct or convert it into a pedestrian promenade. The walkway proposal won, and by 1994, the Promenade Plantée from Bastille to Reuilly was open to the public. The next stage was to convert the old vaults beneath the rail line into exhibition spaces and, ultimately, into a series of craftsmen’s workshops and galleries. Today, the restored railroad viaduct—renamed the Viaduc des Arts—houses cabinetmakers, musical-instrument makers, fashion designers, textile restorers, and other businesses related to the arts.

For tourists, the Viaduc des Arts and the Promenade Plantée offer a chance to take a break from city sidewalk and street traffic while seeing how historic preservation and modern urban-design objectives can work in harmony. When you walk the 1.5-km or 1-mile distance between Reuilly and Bastille, you’ll understand that Paris is more than a city with a history—it’s a city that continues to develop and grow, combining the old and the new in ways that can bring excitement and vitality to neighborhoods that are off the main tourist circuit.

Finally, a word about museums and galleries in Paris. I guess if you’ve never done the Louvre, you need to do it, but Lord, it is massive, a time sucker for sure, and way too much of the collection does not interest me. I’m a big fan of the smaller museums, and I love the Musee D’ Orsay as a Louvre alternative…good collection, beautiful building, and you can knock this one off in a couple of hours.

On this trip I enjoyed a delightful visit to a private Monet museum, well worth a visit, though she’s a bit off-the-beaten-path, but easily accessible by metro. This is the Musee Marmottan, Metro stop La Muette…check the website: www.marmottan.com

Let’s begin by wandering down rue Antoine Bourdelle, 15e arrondissement (district) near the Gare Montparnasse. At no. 18, you can’t miss, through a grillwork fence, a garden hosting a bronze horse almost two storeys high.

This is the Musée Bourdelle, former home and studio of the sculptor (1861-1929) for whom the street is named, and whose work—fittingly for a small museum—was grandiose in intent and result. The style is somewhat between rough-hewn Rodin (with whom he collaborated for a while) and Art Déco’s wind-swept streamlining.

On view are samples of his inclination for antiquity and exoticism that range from statues of Sappho and Archer Heraclés to a monumental portrayal of Polish national poet Mickiewicz and bas-reliefs of music, drama, etc. for the Théâtre des Champs Elysées, inaugurated in 1913. It was inaugurated with a scandalous premiere of Stravinsky’s Rite of Spring, danced by a rather lightly clad Nijinsky. That year Bourdelle exhibited work at New York’s landmark Armory Show.

Open except Mondays and holidays 10AM – 6PM

Just around the corner is the diminutive Musée du Montparnasse recalling such Roaring-‘20s Montparnasse denizens as Hemingway, Picasso and Modigliani. It opened its doors in 1998 in a quaint paved street (Chemin du Montparnasse) which itself is worth the visit.

The museum offers its visitors a treasure trove of photographs taken by such luminaries as Robert Doisneau and Henri Cartier-Bresson, and many watercolours and prints by Montparnasse artists.

Still closer to the Gare Montparnasse is the Musée de la Poste, an offshoot of the postal administration—and a good place to take the prettiest mail-woman in your neighborhood.

Opened in 1973, it’s a museo-graphical surprise: you take an elevator to the fifth floor then spiral down, room-to-room, to the ground floor. Goodies along the way include: an articulated arm Chappe semaphore (ca. 1800), part of a France-wide network enabling messages to come 10km. station-to-station in clear weather from, say, Calais to Paris in just over an hour until France imported Samuel Morse’s system in 1856; a lovely 1900 ceramic post office counter; and an explanation of Paris pneumatique system that, 1866-1984, air-propelled correspondence via underground tubes at a speed of up to 700 meters a minute.

Open except Mondays and holidays 10AM-6PM

For wine buffs I can think of no place better than the Musée duVin (Wine Museum). It opened its doors in 1984, and hunkers in 13th century quarries reconverted in the 16th-17th centuries by monks to store their wine (grapes grew abundantly on the Passy slopes, now facing the Eiffel Tower).

Ranging through time from Roman domination, and signposted by mini-Bacchus figures, displays include viticulturists’ tools, a barrel-maker’s workshop, and vessels for testing, storing, transporting and consuming the beverage.

The visit ends with…wine tasting! You can also have lunch there.

Open Tuesday through Sunday 10AM – 6PM

And my friends, FINALLY I wan to advise that for this trip I found the MSN website www.bing.com VERY helpful to map out all of the Paris destinations (or anywhere else in the world for that matter). You can pop in an address, it will add a push pin, you save it, and later you can print all of your push pins with enlarged maps… very good idea to help you organize your visit in a geographically logical order.

I hope you find this information helpful and I hope you’ll get in touch with me the next time the travel bug bites!

Sandra Wilkins is a Tour Specialist at AffordableTours.com