The national park system is a treasure of wildlife, unbelievable landscapes and American history. This was our destination this past summer. My 11 year old son and I wanted to experience this since heâ€™s been learning about a lot of these places at school. We chose to travel on a family tour, Wild West Cowboys and Buffalos with Trafalgar.

The tour started in Salt Lake City. Arriving by plane you can see the Great Salt Lake from above. This was an impressive view and a start to what will become an unforgettable trip. After a short and seamless transfer from the airport, we arrive at our centrally located hotel. Salt Lake City is a very attractive city, especially around the Temple Square, which is the center of the Mormon religion. Within minutes after checking in at the hotel, we were sightseeing on our own, by taking the light rail tram which runs in front of the hotel. 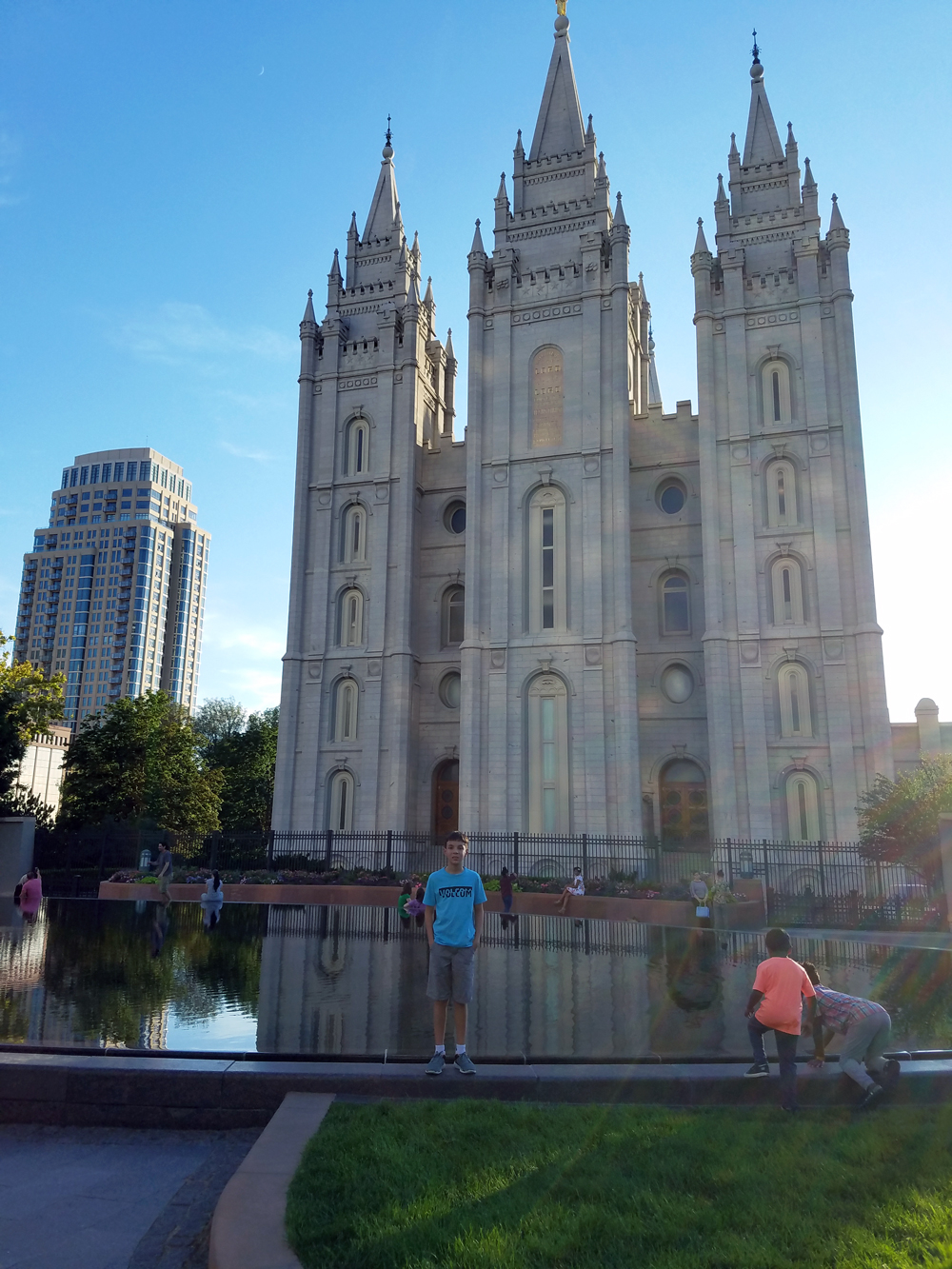 Early that evening, we met our wonderful tour director, Lexie, during the welcome party. She was very friendly and in no time she had engaged the 19 kids on tour, by organizing a game where everyone met each other and the adults. It was fun from the start!

The next morning on our Wild West Cowboys and Buffalos with Trafalgar, we drove through Idaho, the second of the six states we would visit during the tour, to get to Grand Teton National Park near Jackson Hole, Wyoming. The snow covered granite peaks are awe inspiring and a paradise for outdoor activities. We took an optional excursion to float down the Snake River. This river runs through the mountains all the way to the Pacific Ocean. 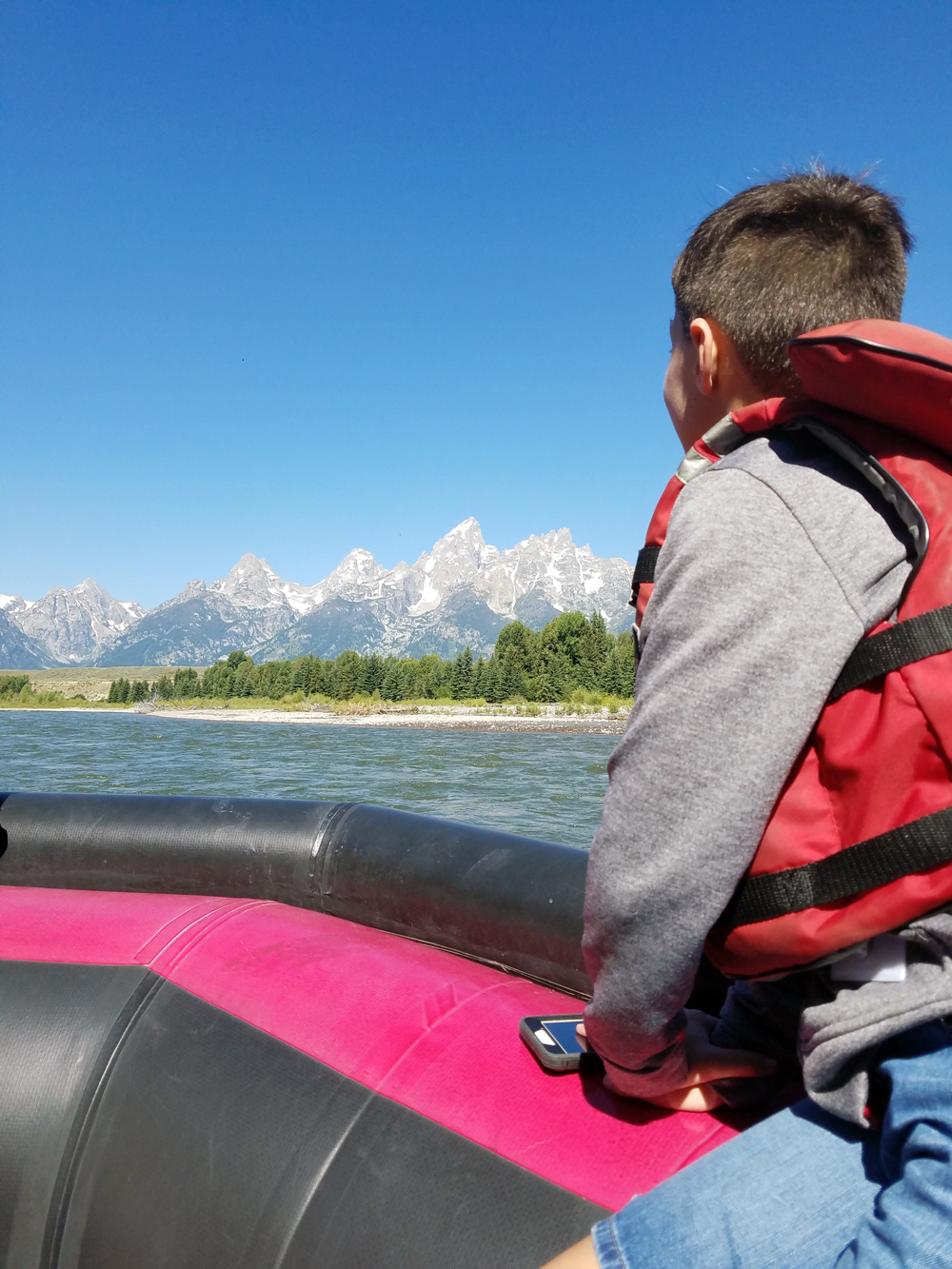 During this adventure, we were not only able to see the mountains up close, but also the resident birds such as bald eagles and falcons. We spent the night in Jackson at a very nice hotel like most of the ones in the itinerary.

After stopping at the visitor center where you can see the breathtaking views of the Grand Teton peaks, we were off to Montana. First, we stopped at the Oregon Trail Museum, where we learned of the tribulations of the early settlers on their way to the Pacific territories, and viewed a reenactment of the typical life of a settler. After that it was on to a dude ranch, our accommodations for the evening.

The next morning  on our Wild West Cowboys and Buffalos with Trafalgar, we could select an activity among white water rafting, horseback riding or fly fishing. We selected horseback riding. This was the first time my son had ridden a horse all by himself, and thanks to our expert guide, it went smoothly.

After lunch it was time to get back on the road to head over to one of the highlights of the tour, Yellowstone National Park. 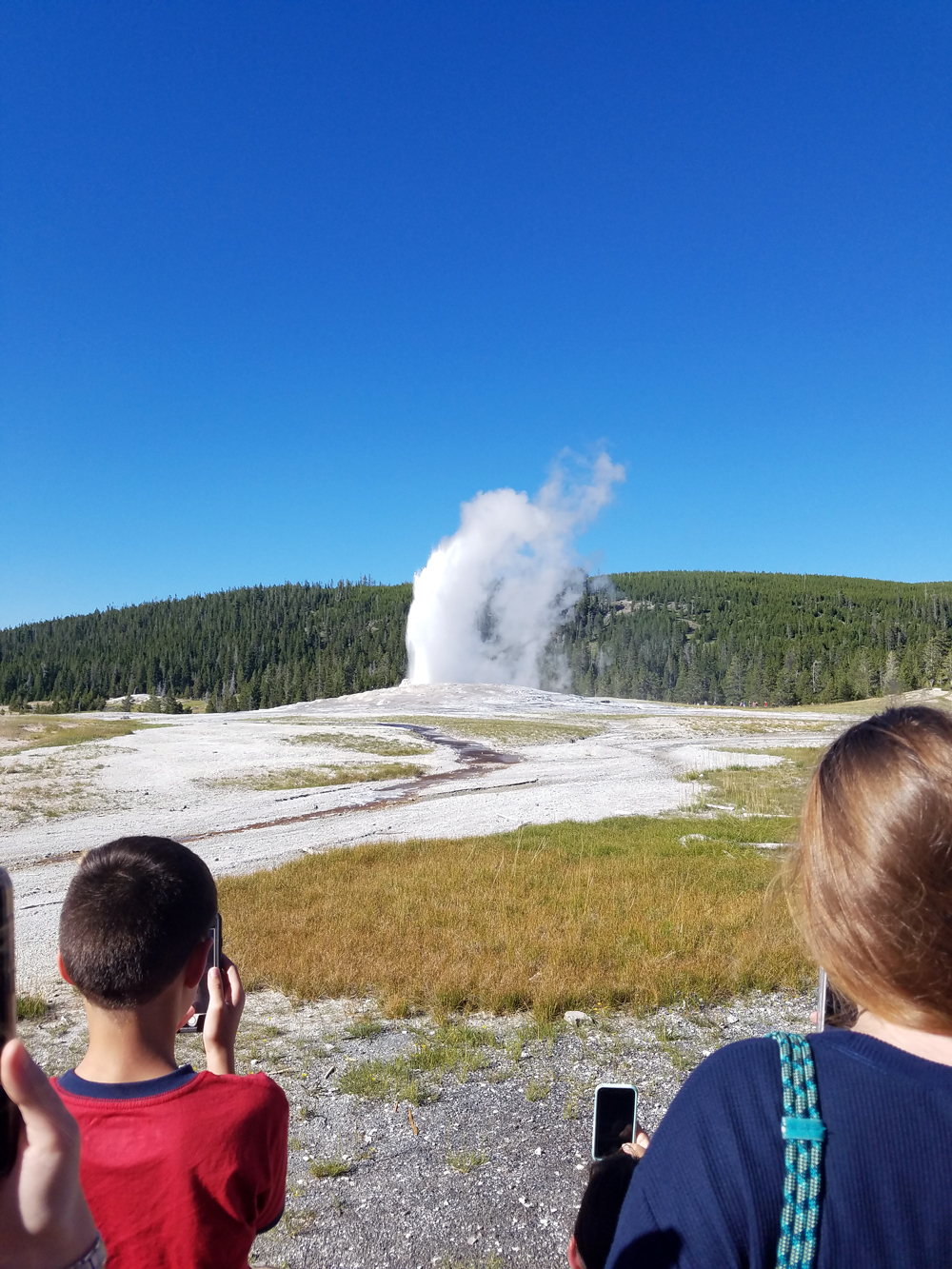 There, we experienced a plethora of sights, sounds, and smells over the next couple of days. 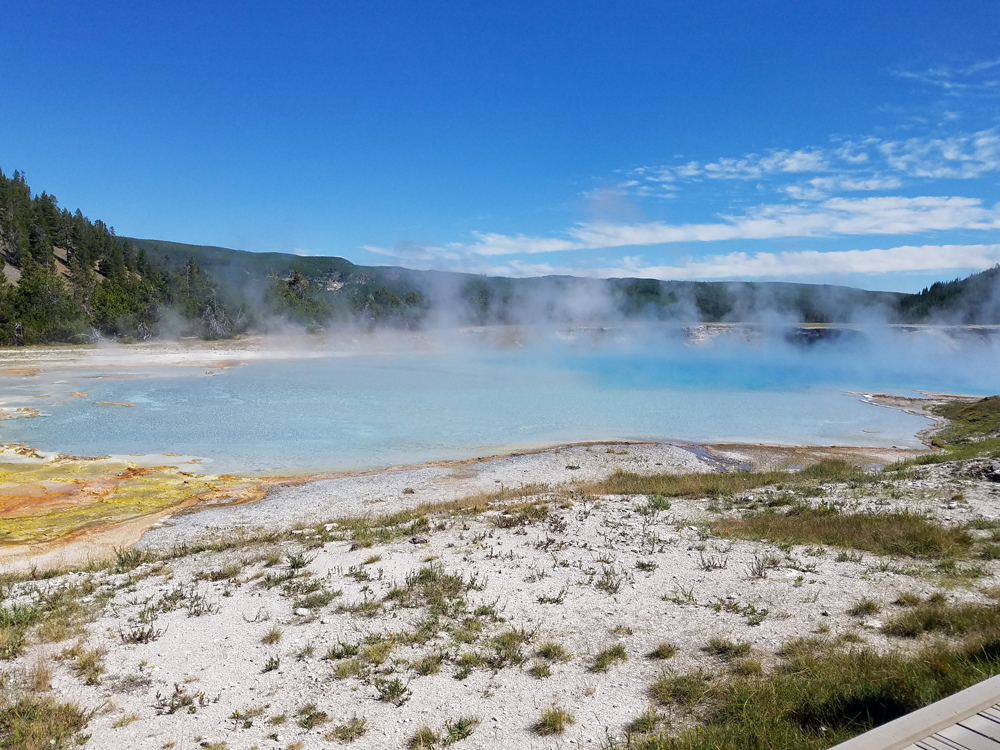 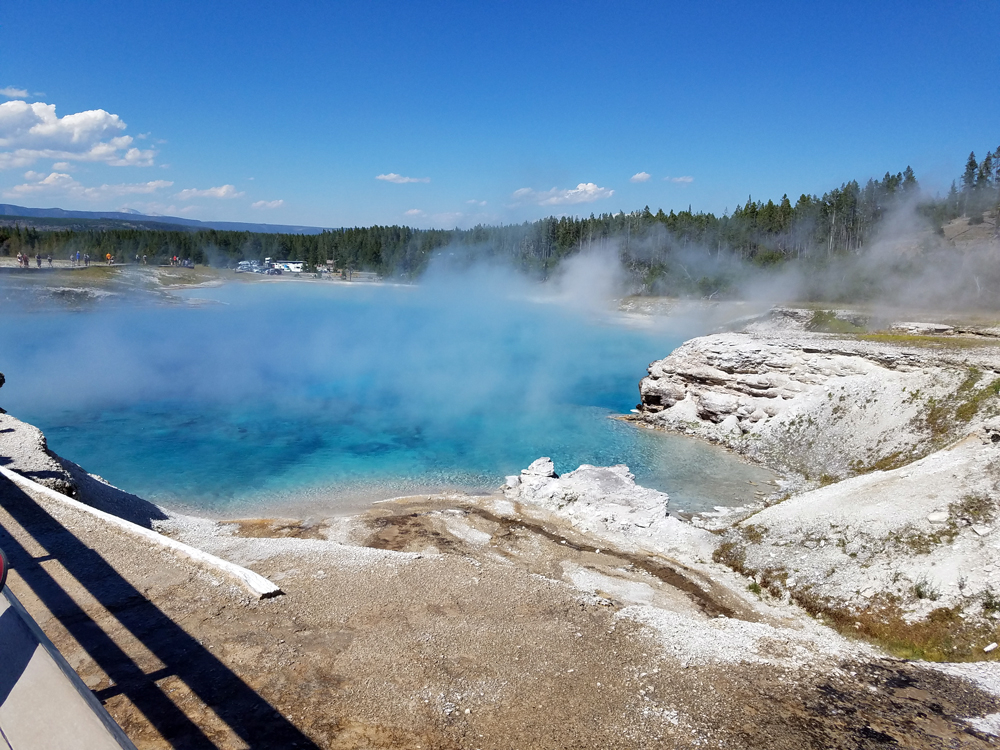 From the famous geysers, such as Old Faithful, to mud pools, to sulfuric lagoons, and beautiful waterfalls. It was simply unique. 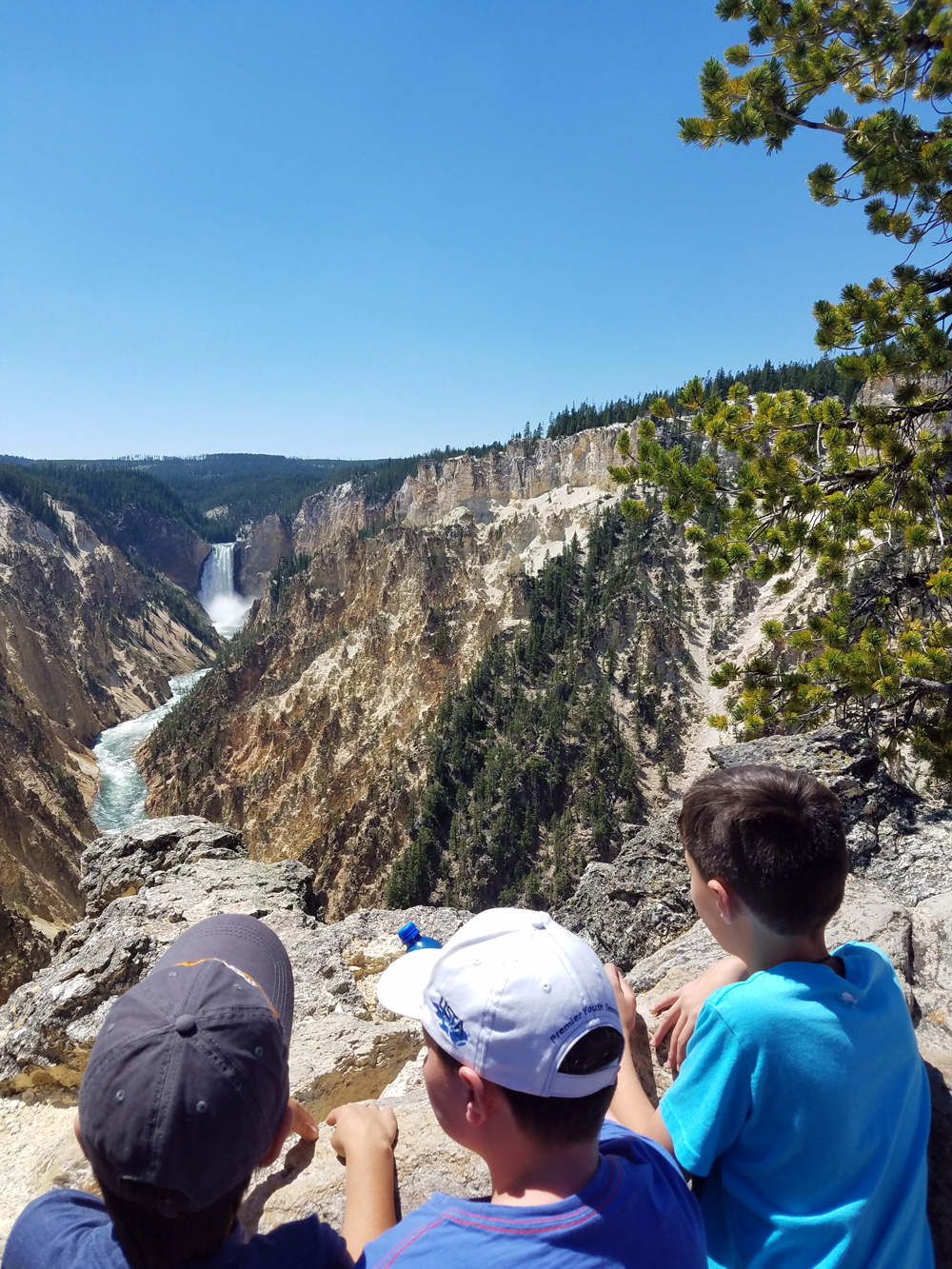 However, these were not the only sights that would impress us over those two days. The wildlife was teeming. We were able to see, up close, along the roads, herds of elk and the always impressive mighty bison. We even saw the incredible sight of a Coyote chasing after Elks along a river ravine. 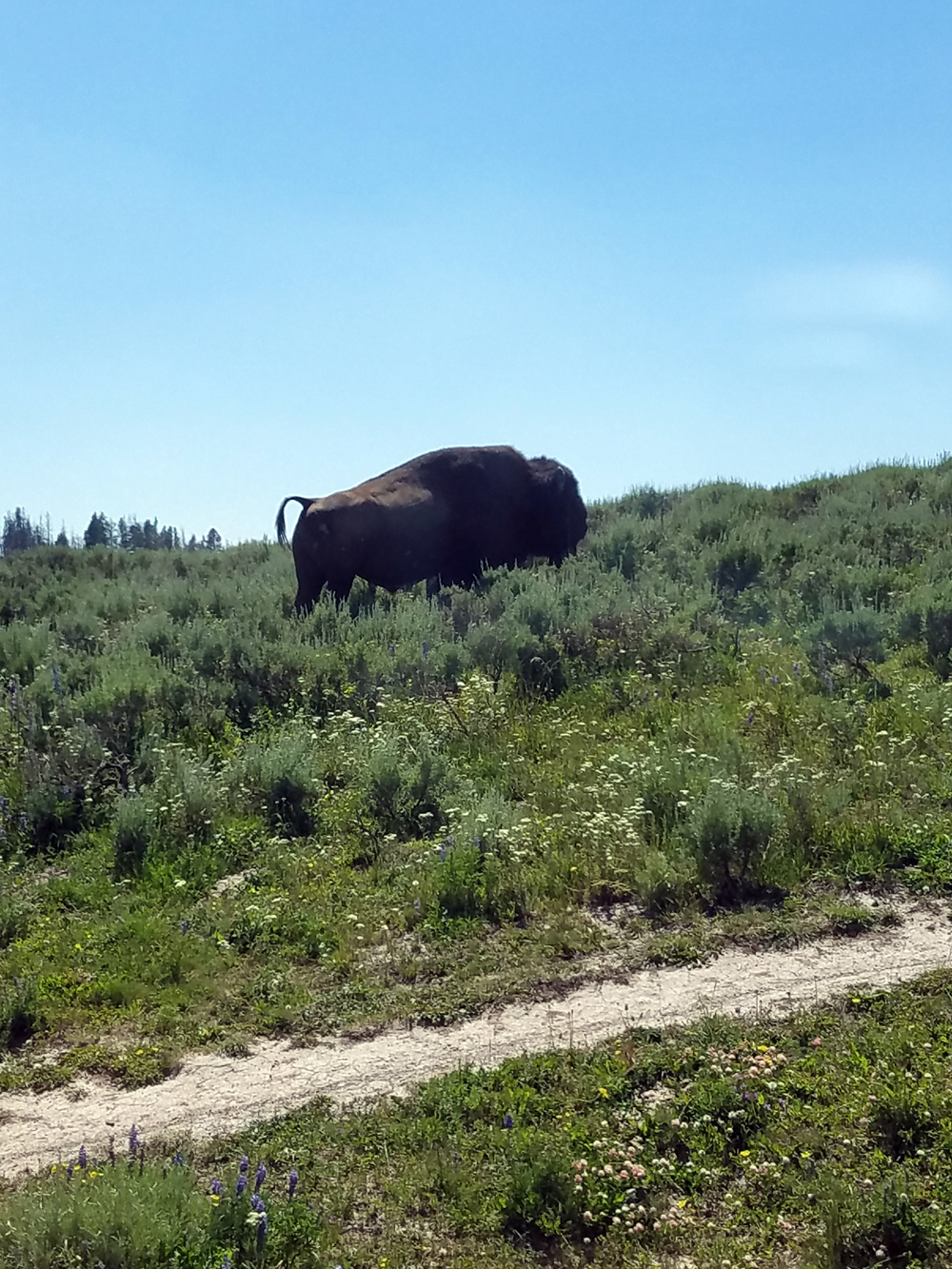 We spent these two nights in one of the National Park lodges. The accommodations are basic, but the location on the park is priceless. This location allowed us to view the Yellowstone Lake during breakfast and dinner. During dinner we had an unexpected visitor. A huge moose walked alongside the shore right outside the restaurant, a very rare occurrence. Even the restaurant staff have never seen such a sight up close. Everyone was at the restaurantâ€™s balcony in an instant to take pictures and videos. 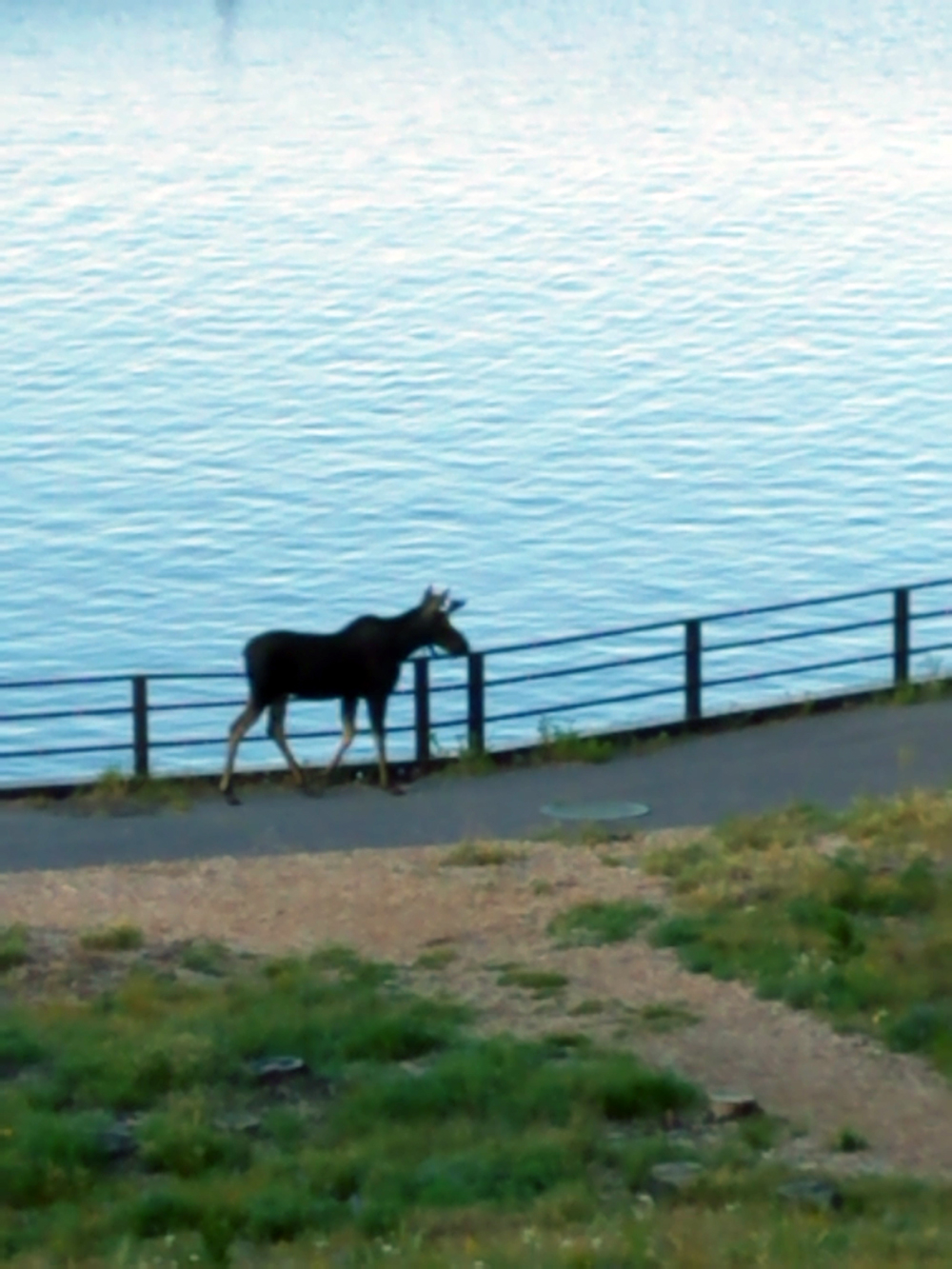 Leaving Yellowstone is a sight in itself. As we left the mountains, we could see the unending prairie opening up before our eyes. Our next destination was Cody, Wyoming. There, we visited the excellent Buffalo Wild Bill museum. The history of the west unfolds in the different exhibits from Cowboy life to Indian culture, to the history of the tragic Indian wars, an indelible part of the forging of the nation. 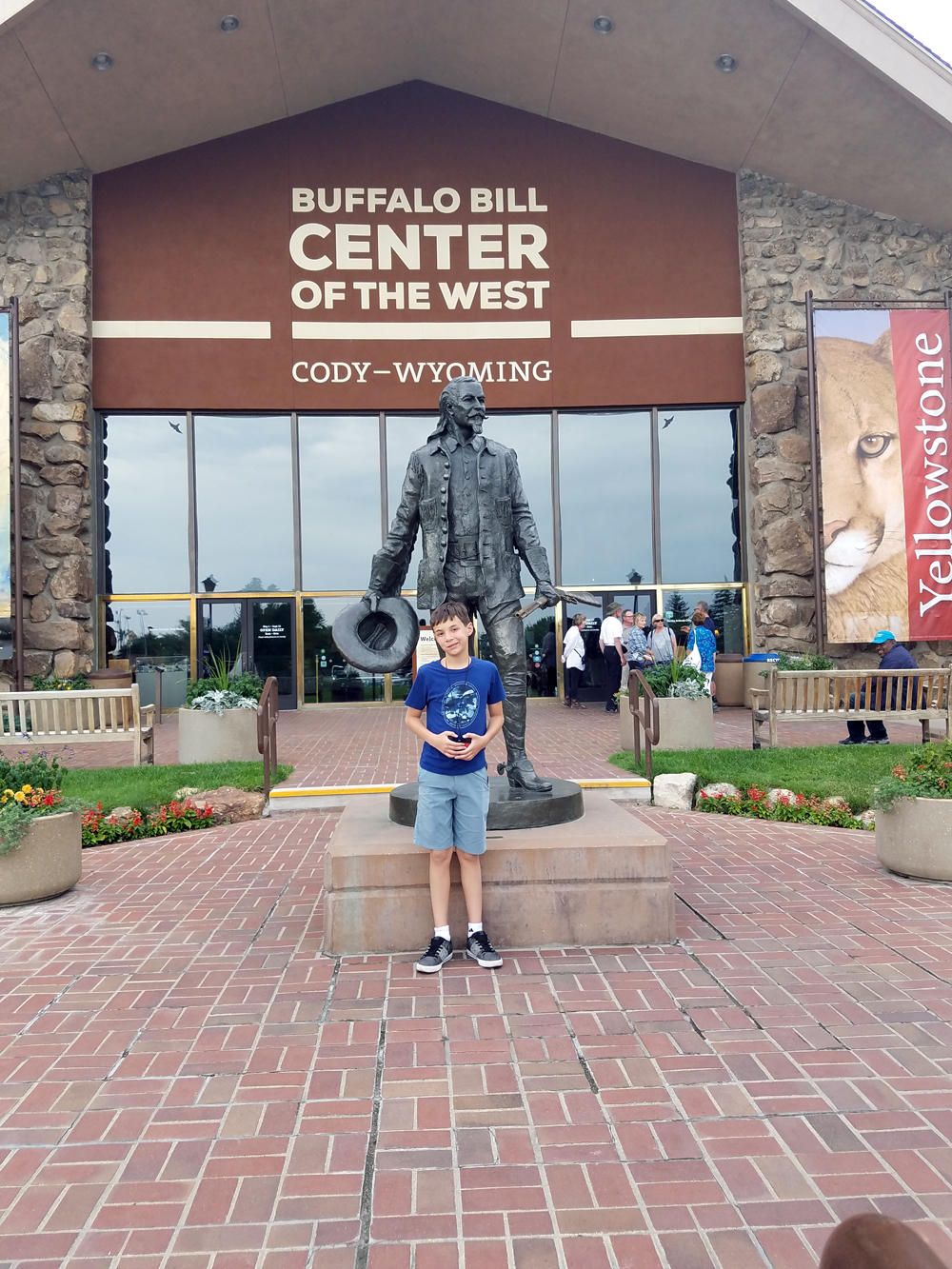 After spending the night in Sheridan Wyoming, we arrived at the state that my son was looking forward to visit the most, South Dakota. First on the agenda was the monumental Crazy Horse Memorial in honor of the famous Sioux chief. Once finished, this will be the largest mountain carving in the world. 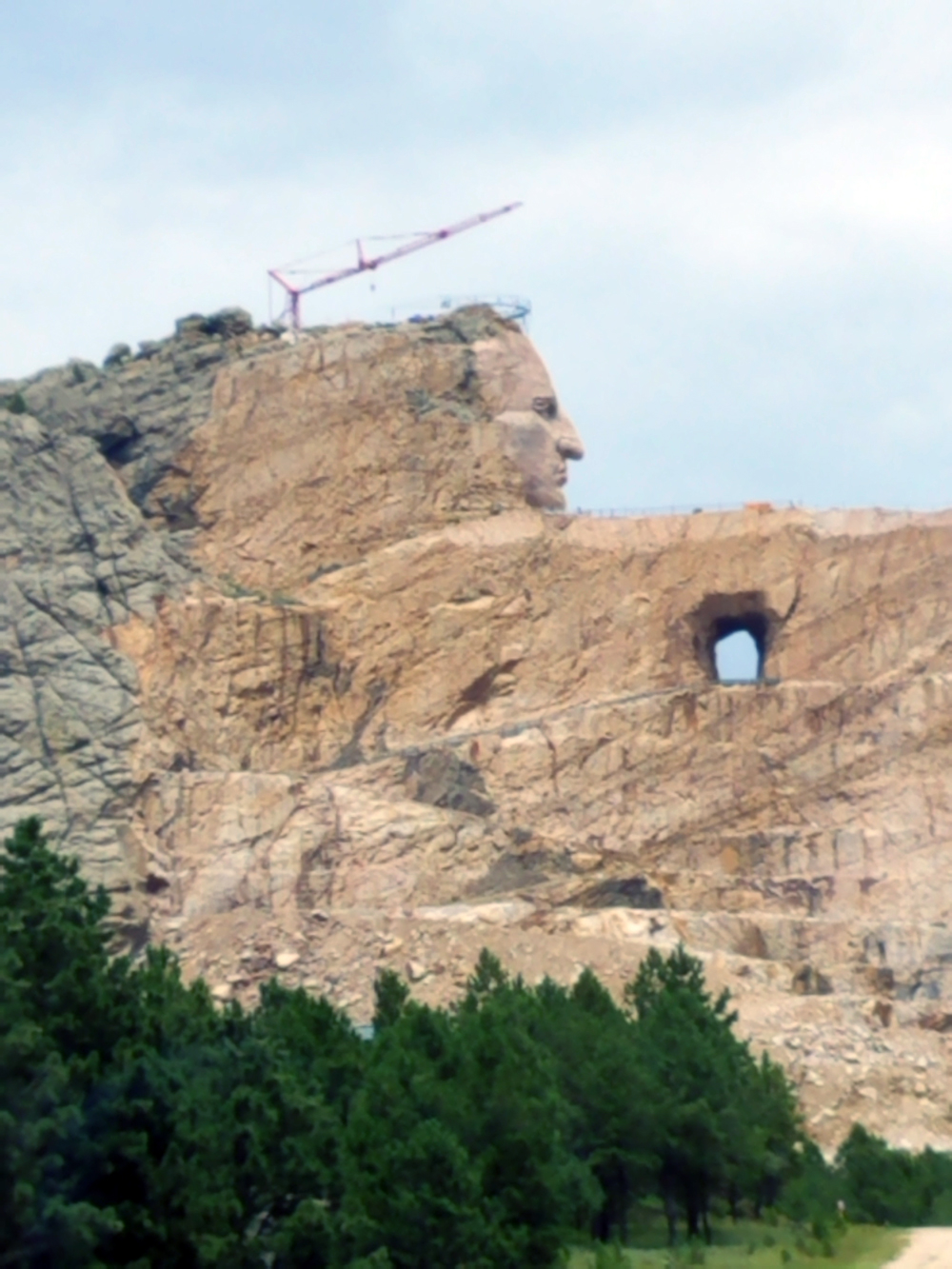 The last two nights on our Wild West Cowboys and Buffalos with Trafalgar, we stayed at the very nice, and perfectly located Alex Johnson hotel in Rapid City. An unexpected stop at a park where pieces of the Berlin Wall have been placed, was one of the two â€œhidden treasuresâ€ visits that Trafalgar provided during the tour. The following morning, we went to the famous Mount Rushmore, after first, stopping at Bear Country USA, where we drove through in plain sight of wolves and dozens of bears. The kids loved both the bears and the amazing monument. 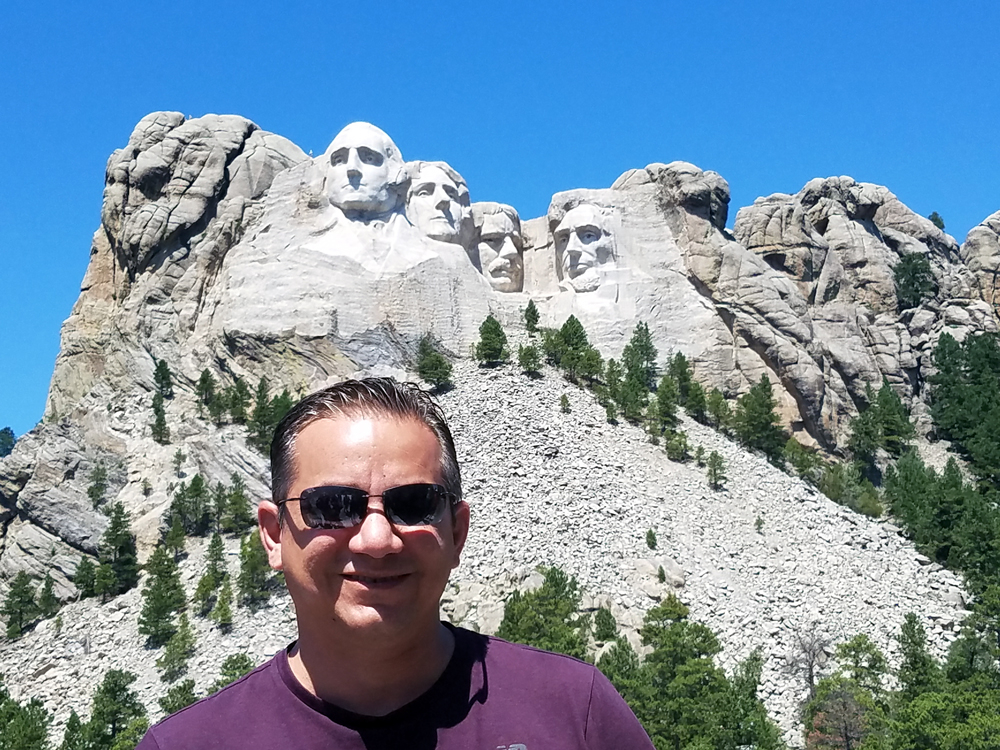 That evening, we had our farewell dinner, where we were treated to a show of Native American dances and rituals. The next morning, most of the guests headed towards the airport. We continued on to the Denver airport.

Trafalgarâ€™s first class staff and organization enhances what is already an unbelievable experience to amazing levels. This Wild West Cowboys and Buffalos with Trafalgar tour is a tour my son and I will always remember. I very highly recommend it!