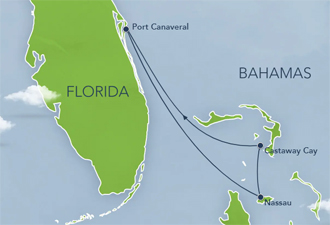 Mention Promo Code: PC-AT100
Up to $200 onboard credit (spending cash) per cabin on this sailing

Disney has a comprehensive plan that outlines protocols for managing illness and closely follow the guidance of public health officials. In light of COVID-19, Disney Cruise Line is operating at elevated cleaning and sanitation levels. Among the procedures currently in place include:

Question: When should I arrive at the port?

We suggest that you arrive at least 2 hours before the scheduled departure time.

Question: How can I communicate with my family and friends at home when I am on the cruise?

Telephone service can be quite expensive and the service may be spotty. However, Wi-Fi services are also becoming the standard though access may come with a fee. You can view rates once you register for the cruise. Some stateroom categories and loyalty program benefit levels will offer a generous amount of "Wi-Fi Time", access to the ship's internet cafe or both.

Cruising is different now, no doubt about it. Its not what it used to be pre-covid, but it is still great and the "Disney touch" is still there. Disney did a great job having the characters show up around the island and on the boat; there was no set schedule on our 9/18 sailing on the Fantasy, but we saw all of them a lot. Now is actually a great time to cruise because there are much less guests. I think our cruise had 1200 guests on-board.

Pete was very professional and friendly to deal with

From the start of my booking for my trip with my travel agent, Jerry, I soon realized he was out to put together the best and most economical, but excellent, package deal for me and my family of 11. He was full of helpful suggestions about what we would need on our cruise and on excursions ashore. He was extremely patient with my changing itinerary to accommodate my wishes, considering the size of our group traveling together. He was truly professional, and a good-humoured, likeable person. I am happy to share that my family and I enjoyed all the arrangements---the cabins on the ship, the proximity of the rooms to one another; the hotel the night before the start of the cruise; and the transfers where needed. Our four-day family Disney Cruise turned out to be an extraordinary and joyful experience. I found Jerry to be a most experienced asset with the Affordable Tours team. I would definitely book another trip through them in the future and I will recommend them, especially Jerry, to other family and friends. Thank you Affordable Tours for helping to make my trip a memorable experience from start to finish! M. Haas

While The Disney Wonder had a special section just for adults -- including a pool area -- the ship is really designed for families who take along their kids. From what we saw and heard, the Disney staff does an excellent job of keeping children -- from small kids up to and including teenagers -- entertained allowing the parents to have time alone aboard the ship. Getting back to the adult sections, it must be said that the ship does not have many bars and only one of these had a truly good bartender. Also, one can get tired of being inundated with Mikey and Minnie and other Disney characters on a 14-day cruise. One other thing I would like to mention is that the Disney Wonder is a beautiful ship with many beautiful areas aboard and the ship is the best maintained ship we have sailed on. (This was our first Disney cruise and our 32nd overall -- with Cunard, Regent Seven Seas, Holland America, Celebrity, Seabourn and others among the cruise lines we have traveled on)

Kia at affordable tours is amazing. She's always so helpful and is wonderful to work with.

The process of booking and value was superb!

Disney 7 day cruise was great and worth every penny. My son ate what I paid for his trip. Great ambiance, food, activities and adventure. Thank you so much for all of your help Ms. Levon. The $50 credit was much appreciated from Affordable Tours as well.

This was the best family trip ever!

Sadly the trip on the Magic was not as superb as on the Wonder to Alaska, but we really enjoyed the crew, especially and the kids loved the themes and pools and soft ice cream. There was way too much prep for a vacation and too many 'ins' and 'outs' to know to make it a good trip. Packages for wines, packages for photos, internet, it never ended, but the topper was the water package just for bottled water. Really? By the time one paid for excursions and necessities, it became very expensive. I would rather have been given, for example, internet access for email and a bottled water each day and put it in the trip cost, rather than have to negotiate each item individually. Other cruise lines do this, particularly our favorite, AMA. All the paperwork and negotiations for Disney turned a vacation into a hassle. Several excursions were canceled at the last minute which left the traveler high and dry---and disappointed. Daily events were too late if you were on excursions the next day, etc. There were lots of things for kids to do, but adult items were at a premium or too late in the evening to enjoy if you were on a crack of dawn tour the next day. We attended very few for this reason. Shows were too late, fireworks were too late, etc. We attempted to attend the transformation of the Irish Pub event only to be disappointed in the skit put on and paid $23 for two half glasses of mediocre wine. Really? Laundry rooms were a true event. Soap machines were broken (I had learned to bring my own), there were never enough machines and people actually got nasty jockeying for a chance to do the laundry. That was an event in itself. Need more rooms and machines available and working for sure. Photo package was a bomb. As of day 4, no photos had been taken and we contemplated canceling. That evening at dinner a photographer did come around but half our table had already finished the meal and gone. Next evening we did get a family picture taken in the foyer that came out well, so that picture cost us the price of the package. Not acceptable. Merchandise in the onboard store was minimal and not well organized. Disappointing and Disney missed an opportunity to make money. Luxury items in Jewelry, watches, etc. were ridiculous and a waste of space. The crew was great and genuinely tried their best. They were obviously stretched to their limit with little time off, and cannot imagine how they do it continuously all summer, one batch of visitors after another. A great kudo to them!! Food in the restaurants was good and well presented. Carrabas was ok, but could have been better organized as a buffet. By the time one gathered the food, the condiments or salad, the drink, food was cold or ----time was running out to get to an event. Eating became stress and overcrowding. We enjoyed the pools, the 9th deck events. Kids did as well. Kids loved their activities and clubs. It appears only the adults grumbled at all the paperwork, extreme planning required, packages, changes in schedules and mediocre tours. We are signed up to do a Disney tour again, and know the kids will enjoy it. But should one really have to know the gouge to take a vacation, plan over a year ahead to get a dinner seating, pay as much for excursions and packages as for the original trip, not be able to find all information easily such as transfers and port arrangements..... I know Disney can do better. They have good people, they just need to organize and market better and raise their prices to include some of these basic necessities.

You pay a premium for a Disney cruise. However, the rooms, food, entertainment, and amenities are excellent. And the special programs for children and youth are terrific.

It was an organized trip. Everything was on time and every staff showed his best to serve us .

Great experience. Will use again!

Note: AffordableTours.com is a travel agent for Disney. Brochure Price is based on the itinerary's highest brochure price. Our price reflects our base price for the same departure as Brochure Price. All prices, itineraries, accommodations and dates are subject to change without notice and at any time. All prices are USD per person and based on double occupancy. Availability is limited and must be reconfirmed at time of booking. All prices change frequently and our website prices are not guaranteed until a deposit has been received by us. The prices on our website are intended to serve as a guide only and may not accurately reflect current prices. We are not responsible for errors, omissions, or changes in these prices until a booking has been confirmed by one of our agents. Please call us toll free at 1-800-627-3753 to confirm current prices and availability. Prices listed are per person, cruise only, and based on double occupancy. Prices include port charges but not surcharges or taxes.