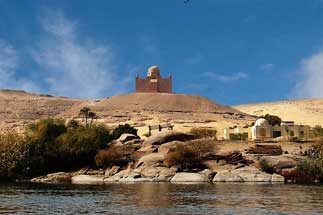 Alexandria is the second largest city in Egypt, and its largest seaport. Alexandria has an estimated population of 5 million people. Alexandria extends about 20 miles up and down the Mediterranean sea in northwest Egypt. The city of Alexandria was named after its founder, Alexander the Great, and as the seat of the Ptolemaic rulers of Egypt, rapidly became one of the greatest cities of the Hellenistic world. It was second only to Rome in size and wealth. However, upon the founding of Cairo by Egypt's medieval Islamic rulers, its status as the country's capital ended, and fell into a long decay, which by the late Ottoman period, had seen it condensed to little more than a fishing village. The city is Egypt's leading port, a commercial and transportation center, and the core of a chief industrial area where refined petroleum, asphalt, cotton textiles, processed food, paper, and plastics are produced. In ancient times, the city was known for the Lighthouse of Alexandria which is one of the Seven Wonders of the Ancient World. Ongoing maritime archaeology in the harbor of Alexandria is illuminating details of Alexandria during the Ptolemaic dynasty.

You can visit one of the most popular libraries in the World. The Bibliotheca Alexandrina is a foremost library and cultural center located on the shore of the Mediterranean Sea in the Egyptian city of Alexandria. It is both a commemoration of the Library of Alexandria that was lost in olden times and an attempt to revive something of the brilliance that this earlier center of study and learning represented.