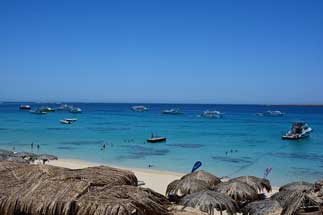 Port Said is a northeastern Egyptian city near the Suez Canal. Port Said has an estimated population of 500,000 inhabitants. The economic base of Port Said is fishing and industries, like chemicals, processed food, and cigarettes. Port Said is also an important harbor both for exports of Egyptian products like cotton and rice, but also a fuelling station for ships that pass through the Suez Canal. Port Said also thrives on being a summer resort for Egyptians. Port Said is Egypt's most beautiful city, with numerous old houses with grand balconies on all floors, giving the city a distinct charm. Port Said's twin city is Port Fouad, which lies on the eastern side of the canal. The two cities coexist, to the extent that there hardly is any town center in Port Fouad. The cities are connected by free ferries running all day. An interesting fact is Port Said was designated to receive the gift of what is now known as the Statue of Liberty, then called "The Light Of Asia." When the current government decided that it was too costly, "The Light of Asia" was shipped to New York City where it has become a National landmark.

The National Museum in Port Said has a variety of displays covering all of Egyptian history. The Museum, which was opened in 1987, has exhibits on the 1st floor covering prehistory and the paranoiac period, including several mummies and sarcophagi along with various statues and other artifacts.

Other places you should go see that are accessible through Port Said are The Pyramids, Sakkara (burial ground), or the Sphinx. Either place you visit you will not be disappointed.