Belgium is a favorite European travel destination. It's very diverse, with influences from many neighboring countries of France, Germany, the Netherlands, and Luxembourg – you'll see many influences in the language, food, and city styles. Belgium has a lot of history to discover, with many of its traditions preserved for tourists to experience. Sightsee around the top cities like Brussels, Bruges, and Antwerp on a Belgium Tour to make the most of your European vacation! With tour operator volume buys plus our low everyday prices you can save up to 40% versus assembling the same itinerary on your own! Book your Belgium tour today with AffordableTours.com, your discounted tour headquarters. 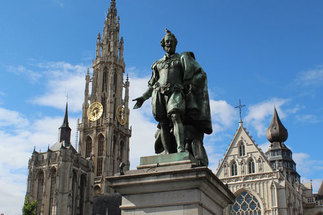 Belgium Tours When To Visit

What are Belgium Tours?

Belgium tours offer an exciting travel experience in one of Europe's most popular destinations. Belgium is a very diverse country worth exploring the history, culture, and modern sights. Spend some time in each of the favorite destinations like Brussels, Bruges, Antwerp, and smaller towns to immerse in the attractions and lifestyle.

Belgium is a stop included on many tours around Europe. Spend a couple of days exploring the traditional plazas like Grand Place, modern attractions like the Atomium, or Antwerp's scenic port city to get a broad view of the country. Some tours even include destinations outside the major cities, such as a visit to the site of the Battle of Waterloo.

Who should go on a Belgium Tour?

Belgium tours have something for everybody! Whether you're a history buff or looking for a romantic town for relaxing, Belgium has it all. There are various tours specializing in exploring the local cuisine, witnessing the beautiful tulips blooming, or exploring the UNESCO World Heritage sites. You'll find the perfect tour to suit your travel needs!

Where do Belgium Tours go?

Belgium tours combine a few days touring in Belgium, along with visits to the neighboring countries. You'll be able to check off several of your bucket list countries when you embark on a European journey. You'll stop by some of the favorite local towns, like Brussels and Bruges, before setting off to The Netherlands, France, Italy, Switzerland, and more!

Great trip again! Gate 1 is a great company. We have gone on several tours with Gate 1 and have never been disappointed.

Kasia was the best tour guide I've had on any trip!! She made the experience amazing with her stories, jokes and making sure we were always on time and knew where we were hoping. Giovanni was an amazing driver!!! No clue how he manages that traffic and small streets without any issues. Best trip yet!!!! I am hoping to get them both for another trip again.

Anita and Derek, the driver, were amazing. Anita had a great personality and was full of information. The tour was great.