It's not every day that you get to experience Bhutan's enchanting lands, so take advantage of the unique experience with a Bhutan Tour. Bhutan is highly reserved and only allows visitors accompanied by a tour guide, so it's the only way you'll get to access one of the best-preserved heritage countries in Asia. Bhutan is a place full of wonder as you discover sacred temples, monasteries, and breathtaking views in the Himalayas. There's no country like Bhutan, and a tour gives you an immersive experience of the destination! With tour operator volume buys plus our low everyday prices you can save up to 40% versus assembling the same itinerary on your own! Book your Bhutan tour today with AffordableTours.com, your discounted tour headquarters. 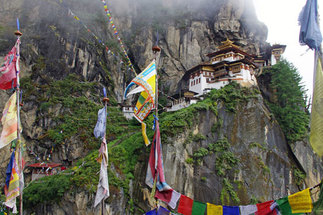 Bhutan Tours When To Visit

What are Bhutan Tours?

Bhutan Tours provide access for visitors to travel to Bhutan. You'll get the chance to explore Bhutan will a full itinerary dedicated to delivering the best tour experience. The tours are the primary way to venture to some natural wonders and learn about religious and cultural heritages. Bhutan Tours give you the trip of a lifetime to Bhutan!

Can I travel to Bhutan?

Bhutan is newly opened for tourism, but it places high restrictions on visa access. Anyone can apply for a Bhutan visa, but only travelers registered with a tour company can enter.

Bhutan tours offer immersive experiences in many of the iconic sites and landmarks across the country. Visit the famous Tiger's Nest Monastery or see the country's largest Buddha statue. You'll tour cultural venues in Thimphu or trek through the mountainous Himalayan regions. Some of the tours also provide trips to Nepal.

Due to the exclusivity of traveling to Bhutan, tours are higher priced compared to other Asian countries. However, thanks to our bulk tour purchasing, we're able to provide you the best rates and present affordable tour options. You can find week-long excursions or choose to stay for much longer. You won't find better prices for traveling to Bhutan!