Botswana is one of the wealthiest nations in Africa, both economically and experiences. If your goal is to see the Big Five animals in Africa, Botswana is your best choice. You'll see an abundance of various wildlife in several major national parks and wildlife viewing sites around the country. Botswana is a country thriving on tourism, so you'll get top-level hospitality during your trip, whether going on a tour experience or experiencing the traditional culture in a local village. Get prepared for the Africa experience of a lifetime when you embark on a Botswana tour! With tour operator volume buys plus our low everyday prices you can save up to 40% versus assembling the same itinerary on your own! Book your Botswana tour today with AffordableTours.com, your discounted tour headquarters. View Botswana Tour Deals and Discounts 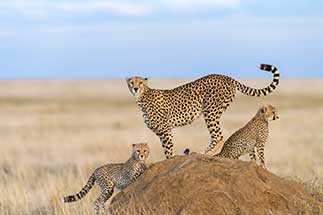 Absolutely fantastic trip. The guide was excellent. The memories are wonderful.

Absolutely loved the 16 day South Africa, with Victoria Falls and Botswana Tour. The Guide was fantastic. Very organized, knowledgeable, went over and above to satisfy any requests. Highly recommend this adventure!

The tour director/guide (Charl) was FANTASTIC! Best guide that we've ever had.