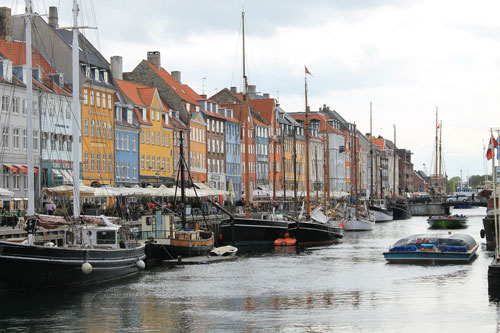 The trip to Scandinavia covered 3 countries - Denmark, Norway and Sweden. It was very fast paced at times but that was required in order to cover the many areas we visited. We stayed longer in some cities than in others with several stops being only for one night. I found the stops where we stayed two nights to be more enjoyable and relaxing. In all, we got to see and experience a lot in a short time which would have been difficult to accomplish outside of an organized group tour. All in all, it was a wonderful trip and very well organized. The Tour Director, Dewi, was excellent and addressed all our concerns.

First off, Mikael "Mickey" was an incredible tour guide/operator. In some ways, he actually transcended the tour. He worked with our amazing driver with such rapport and comic relief, it was such an unplanned benefit. If going on the Scandinavian Tour, ENSURE he is your guide if at all possible. In truth, I was a little let down how "biased" the "Scandinavian Tour" was, seemingly only concentrating on Norway. ***disclaimer*** I did NOT thoroughly read the itinerary. I did make the mistake in assuming we would get to see a fair amount of at least TWO! Sweden, perhaps the most important country of the four we "touched" was largely ignored. In my opinion, we only spent long enough in Sweden and Denmark to SAY we were there, yet we had time to experience very little. Future package adjustments should be considered increasing the exposure of Sweden, even at the expense of shortening Norway, slightly elongating the tour, or changing the route (IE visiting Sweden first, and taking a boat to Oslo overnight to save time). Mickey, due to his passion, sense of humor, and the relationships he builds and bonds with his guests, made up for that disappointment I initially felt and some. Another unbiased criticism is that you (GATE 1) should include at NO COST more of the "optional tours" during the trip. If I hadn't decided to pay for these optional tours (that were never really discussed with me prior as being responsible for), very little would actually have been included outside of transportation and hotels which I could have arranged myself. Mickey, once again, with his own courtesy walks and personal time spent, really made the package seem more valuable than it actually was "from the package" of Gate 1. This made Gate 1 feel a bit cheap, kind of like a "fine print" situation with all the Add Ons that should have already been counted in. One of our tour members became sick with a croup cough of sorts. Unfortunately, his hygiene had much to be desired and by coughing all over his wife, she became sick shortly after. Even after Mickey tried to give the group some tips on courtesy and illness prevention, they continued to cough ALL OVER the other tour guests. By the latter stages of our tour, roughly 25% of our tour had this cough. The older members were the first to get sick and many carried the symptoms through a large part of the trip. I'm hoping Gate 1 will begin providing disposable facemarks and either A) request that such guests wear the masks to help keep the integrity of the tour healthy or B) if having uncooperative members like the two that did not mind spreading the germs to our group like we had, have a mask for everyone else to wear on the bus when we cannot escape such hygiene. I never would have considered needing a mask as Im not a big traveller. After this experience, it's not only a must as a traveller, but should be as a tour organizer to help mitigate such a negative condition. I gave this tour a 5/5. Without Mickey, it would have been a 4/5 due to the "lopsidedness" of the visits and the lack of included activities. If Gate 1 listens to its guests and makes some enhancements AND you get Mikael "Mickey\ as your guide, you might be looking at a 6/5. IT'S POSSIBLE!