Vive La France! Most France tours begin or end in Paris so you can ascend the Eiffel Tower, tour Notre Dame, see the famous art in the Louvre, walk along the Seine, and visit the ornate Palace of Versailles. Browse the upscale boutiques along the Champs d'Elysses, savor croissants and baguettes, climb the Arc de Triomphe and admire the city's scenic beauty and cosmopolitan flair. Of course, there are countless other destinations in France that are just as wonderful. With tour operator volume buys plus our low everyday prices you can save up to 40% versus assembling the same itinerary on your own! Book your France tour today with AffordableTours.com, your discounted tour headquarters. View France Tour Deals and Discounts 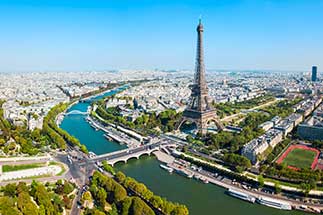 This tour was well-organized and the staff was well-prepared, experienced and knowledgeable. Everything went smoothly. The Tour Director was excellent - he knew the area and was able to provide suggestions and opportunities at each stop to make the most of the time we had. We saw so much, just as described in the itinerary. It truly was a European Experience!

First three hotels were excellent. Then rooms were small, lacking amenities. Last hotel had amenities, but so frenetic. Battle to get breakfast.

Our tour director was excellent. Knowledgeable, professional and very patient! She is superb. I highly recommend her . Hopefully on my next tour with the group, will request her to be our tour director.