Malta is a popular tourist destination located between Sicily and the North African Coast. This archipelago in the central Mediterranean is known for its historic sites, including temples and fortresses. A vacation to Malta is like nothing you've ever experienced before, and it's sure to leave you with some unforgettable memories! With tour operator volume buys plus our low everyday prices you can save up to 40% versus assembling the same itinerary on your own! Book your Malta tour today with AffordableTours.com, your discounted tour headquarters. View Malta Tour Deals and Discounts 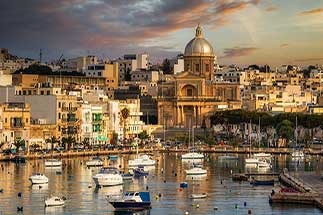 Malta Tours Things To Do

Malta is a gorgeous vacation destination no matter when you visit, but most people recommend coming between October and May. There aren't a ton of crowds during this time, since many choose to visit during the summertime. You'll also experience milder temperatures perfect for enjoying the many outdoor activities that Malta has to offer.

Reviews for Malta Tours and Vacations

Very much enjoyed this tour. It was a small group and worked out very well. I liked the small group as we were able to do things and go to places that a large group would not have been able to do. Staying together and keeping pace with the tour leader on excursions was much easier. One exception to my satisfaction is the tipping to different tour leaders at each destination and several bus drivers, then our daily tour director and bus driver-it gets very out of hand.