As a large-scale seller of Portugal September 2021 Tours & Vacation Packages, we are able to offer you unbeatable prices and unparalleled value. Once you have found the discounted Portugal tour of your choice, please call our tour specialists to book your vacation and save money with our first-rate personalized service! With tour operator volume buys plus our low everyday prices you can save up to 40% versus assembling the same itinerary on your own! Book your Portugal tour today with AffordableTours.com, your discounted tour headquarters. 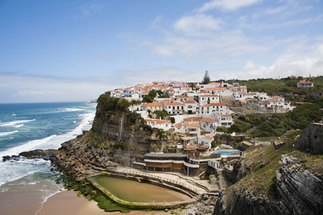 On the Iberian Peninsula in the extreme southwest of Europe, Portugal is bordered on the south and west by the Atlantic Ocean--which means plenty of coastline for beach resort vacations in the warm-weather months! But Portugal has plenty more to offer than its temperate Mediterranean climate, quaint fishing villages and oceanfront resorts.

Consider, for example, the capital of Lisbon, typically included as an overnight on most Portugal tours. It's Europe's westernmost and sunniest capital, and it enjoys a striking location: it hugs high cliffs above the Atlantic Ocean, where the River Tagus empties into the sea. A popular sightseeing stop here include the Monument to the Discoveries, which is a detailed concrete sculpture in the shape of a ship's bow dedicated to the many Portuguese seagoing explorers of the 15th and 16th centuries. Snap photos of the marvelous 25 de Abril suspension bridge across the Tagus; red in color, it resembles the famous San Francisco Golden Gate bridge (though the Lisbon bridge is about 900 feet shorter). Tour the Alfama district, Lisbon's oldest area of the city, still comprised of narrow streets, tiny squares, churches, and whitewashed houses with wrought-iron balconies adorned with pots of flowers, drying laundry, and caged birds.

During your Portugal tour, you'll likely have the opportunity to eat plenty of seafood; cod is the most common fish served here, but you'll also find crab, lobster, scallops and sardines. A soup called caldo verde, made from potato puree, collard greens and chorizo sausage, is a staple, and cheese is often eaten before or after the main course. Save room for traditional rice pudding or egg custard for dessert!

Reviews for Portugal Tours and Vacations

The Portugal excursion was truly fantastic and unforgettable. Every detail was comprehensively covered by the Travel Agency. The Portugal Tour Director Jorge and his staff were extremely professional, knowledgeable, accommodating and meticulous in ensuring that all our needs were met. The overall Tours were wonderful; even though many of them dealt with Churches/Monasteries the historical information made them all seem unique and interesting. The optional tours were great especially; Fado Music and Dinner in Lisbon and the Douro River Cruise in Porto. All meals were varied, delicious and offered a great insight into the culinary delights and various national dishes of Portugal. The accommodations at the various hotels were quite good. However, there was a significant amount of walking and meandering through the cobbled stone streets of the different towns and villages that I found very enjoyable but persons with knee/leg/hip issues found this a bit challenging. This tour captured a great deal of the historical, architectural, social, cultural, culinary and general aspects of Portugal (a hidden gem). I would definitely recommend this as a Must Take tour. The weather was good, mornings usually started a bit chilly but quickly rose to warm delightful days. This Portugal excursion went beyond our expectations.

Our tour manager Rui was excellent, he communicated well. The deriver Pedro was very consencious.