The United Arab Emirates (UAE) is a collection of Emirates along the eastern coast of the Arabian Peninsula. The largest of the Emirates is Abu Dhabi, which has more than &frac34; of the federation's total land area and is the center of the oil industry. The country houses many incredible cultures and histories and has some sights that you will not be able to find anywhere else in the world. This country is also the central hub to many multinational corporations throughout the world and is recognized as one of the business capitals of the world as well. The Emirates, similar to states, are spread out through the UAE and each have hidden gems within. During any one of the tours of the UAE, you will be graced with some incredible sights, amazing food, and interesting histories about the cultures and the area. With tour operator volume buys plus our low everyday prices you can save up to 40% versus assembling the same itinerary on your own! Book your United Arab Emirates tour today with AffordableTours.com, your discounted tour headquarters. View United Arab Emirates Tour Deals and Discounts 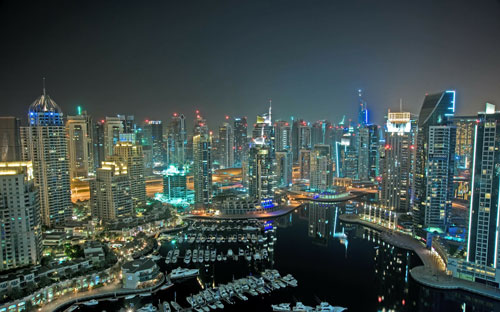 We suggest visiting the United Arab Emirates during the months of October to April. During the summer months, the weather can be unbearably hot and has very high humidity levels. However, during the fall and winter months, the weather is comfortable, and with no rainy season, the winter is a pleasant time to visit. The United Arab Emirates does tend to fill up with tourists over these months, so be sure to book well in advance, and be prepared to make changes to your plans on the fly while here, in case certain venues are over capacity.