Jordan represents an Arab nation that lies on the Jordan River's east bank. It is home to seaside resorts, ancient landmarks, and nature reserves. The best-known attraction in Jordan is Petra, which was the Nabatean capital around 300 B.C. The site, which is set inside a narrow valley, features temples, monuments, and tombs that have been carved into rose cliffs of sandstone. As a result, the attraction is also known as the "Rose City." Besides sites in Jordan and Petra, Jordan tours also extend to surrounding attractions, including the salty lake known as the Dead Sea, located at the end of the Jordan River. With tour operator volume buys plus our low everyday prices you can save up to 40% versus assembling the same itinerary on your own! Book your Jordan tour today with AffordableTours.com, your discounted tour headquarters. View Jordan Tour Deals and Discounts 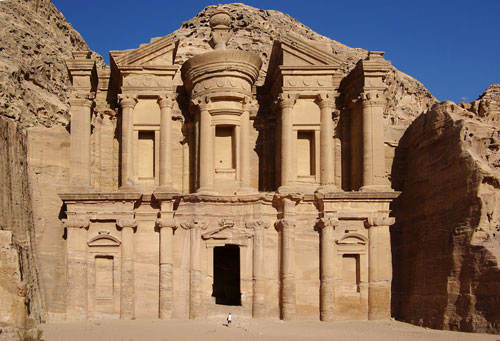 Jordan Tours Things To Do

Even though Jordan does not seem very large compared to other countries, the temperatures and climates do vary by region. The closer to the coast the less severe the heat is, compared to the desert regions in the country. However, you will find the most moderate temperatures during the spring and the fall months.

Reviews for Jordan Tours and Vacations

The total experience was so satisfactory even the choice of hotel except the tour guide, the group is disappointed because most of the traveler have more than 2 experience with Globus and we compare are past experience and for us it doesn't exceed our expectation, especially during the farewell dinner, he left us on our own and no good byes to the group, but he is good in explaining about the important topic in the .tour.