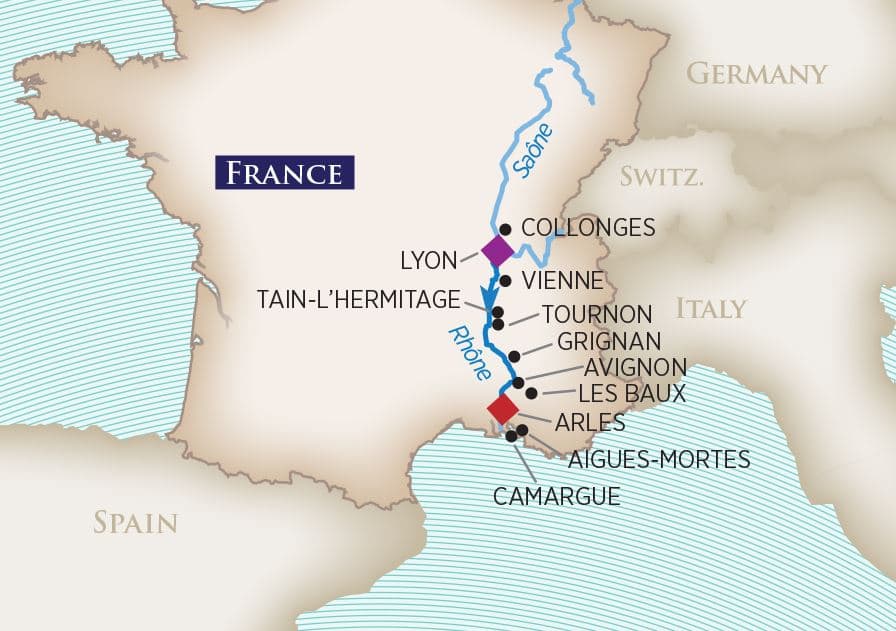 Are you traveling single and don't want to pay the full single supplement, take advantage of reduced single supplement of up to 25% on select Europe and Asia river cruises. As an alternative, solo travelers may choose other available special offers where applicable. (Not all sailings are applicable, contact your Travel Consultant for applicable sailings.)
Must Book By Sat, Dec 31, 2022
View Promotion Terms & Conditions ›

Limited-time Savings of 25% Single Supplement is only applicable to select 2022 Europe and Asia sailings (excluding AmaMagna) and applies to balcony staterooms, excluding A+, AA+ and Suites. Pricing reflects the solo traveler reduced single supplement for entry level fixed window and entry level balcony cabin categories. Offers are applicable to new FIT and Group reservations made by March 31, 2022 and is combinable with Past Guest Privilege Rewards and Future Cruise Benefit programs. 25% Single Supplement is also available on all sailings, applicable to Category E and D (Europe) and Category C (Asia). Single Supplement offers are not combinable with any other promotions/discounts, is limited to availability, is capacity controlled and is subject to change or termination without notice. Port charges, land programs, roundtrip airfare, and gratuities are additional. Other restrictions apply.

For a limited time, when you reserve combination river cruises in Europe, you'll save 10% on your second sailing. 10% Cruise Savings applicable to all Europe sailings in 2022 – 2023 (where combination cruises are possible).
Offer is combinable with Past Guest Savings and Future Cruise Benefit Program.
Must Book By Thu, Mar 31, 2022
View Promotion Terms & Conditions ›

Combination 10% Cruise Savings is per person, based on cruise-only fare and applies to second sailing only. 10% Cruise Savings is based on the purchase of two consecutive cruises, and is no longer valid should one cruise be cancelled. Offer is valid on new FIT and Group bookings only; does not apply to Charters. 10% Cruise Savings is applicable to reservations made between December 1, 2020 and March 31, 2022 and applies to select Europe sailings embarking in 2021 through 2023. Transfers and flights between cruises are not included. 10% Cruise Savings is combinable with other retail offers, excluding reduced single supplement offers. Past Guest Savings and Future Cruise Benefit Program may be combined with 10% Cruise Savings and are applicable only to past guests. Offer is not combinable with industry rates and other special offers. Any individual sailings eligible for air promotions reserved on a combination cruise may be subject to a supplemental airfare cost due to deviations. Individual sailings eligible for any promotional offers, including air promotions, must still adhere to it’s own terms and conditions. Solo travelers must pay an additional single supplement amount before receiving any discounts. 10% Cruise Savings is applied after all other promotions. Must mention promo code B2B10 in order to receive 10% Cruise Savings. Offers are limited to availability, capacity controlled and subject to change or termination without notice. Other restrictions apply. Registration as a seller of travel does not constitute approval by the State of California.

Save up to $2000 on select 2022 river cruises. Amount varies by sailing date and not all dates apply, contact your Travel Consultant for applicable sailings.
Must Book By Thu, Mar 31, 2022
View Promotion Terms & Conditions ›

Promotional rates are valid on select sailings for new bookings only. Up to $2,000 Savings are per stateroom, based on double occupancy, and varies by itinerary and sailing date. Offer valid January 1 - March 31, 2022. Mekong 2-for-l Land s valid on select 2022 sailings and s applicable to new bookings made January 1- March 31, 2022. 2-for-l land program s only valid with the purchase of a participating 7-night cruise at full fare based on double occupancy as we l as the purchase of our and program at full fare for one guest based on double occupancy. Must request promo code 2FOR1LAND at time of booking. 25% Single Supplement Savings applicable to select 2022 Europe and Asia sailings with a current retail offer and applies to balcony staterooms, excluding A+, AA+ and Suites. Offers are combinable with 10% Combination Cruise Savings offer. Past Guest Savings and Future Cruise Benefit Program may be combined with the featured offers and s applicable only to past guests. Offers are not combinable with any Solo Travelers booked with 25% Single Supplement, or any other promotions, limited to availability, capacity controlled and subject to change/termination without notice. Port charges, optional land programs, visas, airfares and gratuities are additional. Other restrictions apply