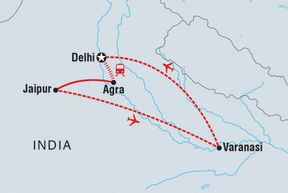 Visit India and explore the highlights of the north on this adventure tour from Delhi to Varanasi. Discover the 'Pink City' of Jaipur, witness the Mughal splendours of Delhi and Agra, and soak up the ambience of holy Varanasi. This wonderful introduction to the magic of India includes lavish palaces, vibrant bazaars, Bollywood blockbusters and the incomparable Taj Mahal. Packed with highlights, take time to discover the beating heart of India.

Day 1: Delhi
Welcome to India. Arrive in Delhi and take your complimentary airport transfer to the hotel. You adventure begins with a welcome meeting at 6 pm where you'll meet your tour leader and fellow travellers. If you arrive early, make sure to get out and explore this exciting capital. Filled with historical sites from different eras, museums and galleries, shops and endless bazaars, there’s much to see and do.

Day 2: Delhi
After breakfast, your tour leader will take you to the city’s historic heart with a guided walking tour of Old Delhi. Set off on the city's modern metro system, then get a taste of India's famed public transport with an optional cycle rickshaw ride through chaotic streets, such as the famous Chandni Chowk. Make a visit to the Jama Masjid, Delhi's oldest mosque and one of its most impressive buildings, then visit the Sheeshganj Gurudwara (Sikh Temple) to learn about the Sikh religion. The rest of the day is free for further exploration or maybe to join an Urban Adventure (booked locally). Perhaps visit the World Heritage-listed Mughal masterpiece of Humayun's Tomb, the first garden tomb in India, built in 1570. Wonder at the tall brick minaret of Qutub Minar, which was started all the way back in the 12th-century, or explore the mighty Red Fort of Delhi. Part palace and part fort, it played an integral part in the history of the city with former residents ranging from royal families to British soldiers.

Day 3: Agra
Farewell Delhi’s hypnotising chaos this morning and set off for Agra, home to one of the world’s most recognisable monuments. Get a taste of India’s rail system with an express train journey to Agra (approx 2 hours). The best way to uncover Agra is by cycle rickshaw, so after arriving you’ll be taken on a rickshaw tour of the city. You’ll visit the spectacular Taj Mahal. Best known as a monument to love and loss, the 17th-century Taj is a beautiful example of Mughal architecture, surrounded by trimmed English gardens. Agra is also home to one of the finest looking forts in India. Enter the dark red sandstone stronghold of Agra Fort – part fortress, part palace and part prison – and search through throne rooms and tiny but incredibly decorated mosques. The rest of the day is yours to spend as you please. A visit to Sheroes Cafe, which employs women who have been affected by acid attacks, is highly recommended.

Day 4: Jaipur
Head to Jaipur, Rajasthan's capital, by private vehicle (approximately 6 hours). Get your first glimpse of the Pink City and its trademark building colour on a walking tour. Navigate crowded streets packed with cars, camel carts, rickshaws, trucks, and bicycles, past traditionally dressed Rajput men wearing colourful turbans and sporting magnificent moustaches, while observing the city’s intricate architecture. Visit a bazaar to browse handcrafted textiles, folk art, and the local specialty of semi-precious stones. Make a photo stop at India's most photographed building after the Taj Mahal, the Hawa Mahal or 'Palace of the Winds'. You have the option of also visiting Jantar Mantar, an observatory filled with instruments to track the stars, built by the founder of Jaipur, Maharaja Jai Singh. This evening, continue to indulge in the wonders of Indian culture by watching a Bollywood blockbuster Cinema – an elaborate combination of action romance, drama and music – at the spectacular Raj Mandir

Day 5: Jaipur
An optional early morning hot air balloon experience won’t disappoint – wake early for a breathtaking overhead view of the Pink City bathed in early morning light. (For additional information about this optional excursion, please see the 'Important notes' section of the Essential Trip Information). Later, climb the twisting roads of the Aravalli Hills and round the final bend to see the massive Amber Fort loom into view. The legacy of a fallen empire, the opulent palace is a superb example of Rajput architecture and is packed with elaborate rooms of lavish murals, frescoed arches and delicate jali work. Don’t miss the sparkling Mirror Palace, covered floor-to-ceiling in thousands of reflective tiles, the hall becomes a dazzling fantasy with the light of a single match. The rest of the day is free to explore more of Jaipur that you might have missed yesterday.

Day 6: Varanasi
Arrive in the holy centre of Varanasi in the morning after a short flight from Jaipur. Varanasi is awash with shrines and temples, and the ultimate destination for Hindu pilgrims who travel from far and wide to experience this spiritual city. Take a walking tour of the old city, through narrow laneways packed with stalls and shops, past the dhobi wallahs, and the endless temples that echo with bells and the pungent aroma of incense. This evening soak up the unique atmosphere of a candle flower ceremony.

Day 7: Varanasi
Today starts early with a sunrise boat ride on the Ganges, where you can watch the light gradually illuminate the many ghats and temples along the river as you pass. There is an option to take a trip to nearby Sarnath, one of the four main Buddhist pilgrimage destinations. The site is where Buddha preached his message of the path to enlightenment and features a number of stupas and museums to explore. Alternatively the day can be spent exploring the laneways and alleys behind the ghats, or picking up some examples of the excellent local silk industry. Perhaps witness pilgrims performing ancient bathing rituals and ceremonies as your time in this sacred city comes to an end.

Day 8: Varanasi - Delhi
Use a free morning to delve further into the spiritual atmosphere of Varanasi, wander through the ghats or perhaps haggle with vendors in colourful bazaars. Return to Delhi by plane (about 1.5 hours) for a last chance to explore India's capital. Perhaps head to the legendary Connaught Place for some last-minute shopping. This evening, why not share a meal with your group to reminisce about your travels.

Day 9: Delhi
Your journey comes to an end after breakfast. There are no other activities planned for the day and you can depart the accommodation at any this morning. For those who wish to stay on in Delhi to further explore the city, we are happy to help in booking accommodation (subject to availability). If you have time, Hauz Khas village is a great place to escape the hustle and bustle of downtown Delhi – a chic artistic enclave set right next to the remnants of a historical site. Or maybe pre-book an Urban Adventure to further explore Delhi with a knowledgeable local.