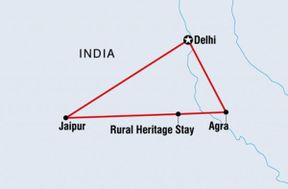 Trace India's famous Golden Triangle on this rollicking 8-day tour of Delhi, Agra, and Jaipur. Explore the icons and discover local spots in the perfect introduction to the diverse north of this fascinating country. Begin in throbbing Delhi and explore the city by rickshaw and metro. Travel to romantic Jaipur to wonder at the pink-hued architecture and the 18th-century observatory. Get a little respite from the bustle with a rural heritage stay, then head to Agra and encounter the iconic Taj Mahal plus the city's incredible fort. Before you know it, you're back in Delhi, ordering chaat like a pro and toasting a chai to an incredible adventure.

Day 1: Delhi
Namaste! Welcome to India. Your adventure begins with a welcome meeting at 6 pm. If you arrive with hours (or days) to spare, consider striking out on your own, perhaps to visit the World Heritage-listed Humayun's Tomb. A great (and tasty) way to get under the city’s skin in very little time is to book an Urban Adventure like the Delhi City Food Crawl. After the 6 pm meeting, head out for an optional meal with your group at a local restaurant.

Day 2: Delhi
Join your group leader on an excursion through Old Delhi. Ride the city’s metro system, and then hop in a rickshaw to the once water-filled square of Chandni Chowk. Discover the Jama Masjid, Delhi’s oldest mosque, before learning about the history of the Sikh religion at the Sheeshganj Gurudwara.

Day 3: Jaipur
Travel by private vehicle into Rajasthan and on to its capital, Jaipur (approximately 5 - 6 hours). A friendly, busy city crammed with palaces and bazaars full of jewellery, textiles and folk arts, Jaipur is a favourite for many travellers. Our suggestions are to stop by the Hawa Mahal (Palace of the Winds), then head over to Jaipur's Royal City Palace and explore its extravagant rooms and apartments. Later, discover one of the five astronomical observatories built by Maharaja Jai Singh, the founder of Jaipur.

Day 4: Jaipur
Choose to take an early morning hot air balloon experience, often a highlight of visiting Jaipur. Ballooning can be done over Jaipur on the morning of day four between September and June. Mid-afternoon visit the Amber Fort. Set on a hilltop overlooking Maota Lake, the fort is an authentic example of Rajput architecture and the Sheesh Mahal (Hall of Mirrors) is one of its more spectacular buildings.

Day 5: Karauli
Leave the ‘Pink City’ of Jaipur behind and drive to Karauli (approximately 5-6 hours). This delightful town was founded in 1348 and is packed with rural ambiance and traditional temples. Take a guided walk around the Old Quarter, interacting with friendly locals and learning about rural Indian life off the tourist trail. Be sure to visit the eclectic market stalls along the way and sample some seasonal local sweets made from Indian ingredients, including petha (pumpkin), jaggery (organic sugar), peanut brittle, and gazak (sesame seeds). Stay in a restored heritage property tonight where dinner is included.

Day 6: Fatehpur Sikri – Agra
On the journey to Agra, stop en route at the one-time capital of the Mughal empire, Fatehpur Sikri (approximately 4 hours). Its stunning mosque displays both Persian and Hindu design and is secured by a 54-metre high entrance. Once in Agra, there’s the option of visiting the marble tomb that was saved for the greatest of the Mughal Emperors, Akbar's Mausoleum. The day then culminates in a visit to the Taj Mahal, built in the 1640s as a memorial to the wife of Emperor Shah Jahan.

Day 7: Delhi
In the morning, take a guided tour along the banks of the Yamuna River to the iconic Agra Fort. Originally designed by Emperor Akbar in 1565 to be a military structure, it was converted into a palace during Emperor Shah Jahan's reign and later became his prison. Perhaps stop for lunch at Sheroes Hangout, a vegetarian & vegan cafe. This beautiful cafe is a one of kind social enterprise providing employment and opportunities for women who were the victims of acid attacks. In the early afternoon, take the 3-4 hour journey back to Delhi by private bus. Arrive back at the hotel with enough time to freshen up and decide where to enjoy one final dinner with the group.

Day 8: Delhi
There are no activities planned for the final day and you're able to depart the accommodation at any time. Check out time from the hotel is 12 noon. If you are departing later, you can arrange luggage storage at the hotel. If you decide to stay an extra couple of days, there are plenty of activities in and around the city to enjoy.

Chetan was an A+ tour guide. very good English, very personable, very intelligent, very knowledgeable and made us feel important and safe at all times. If we go on another tour where we can get CHetan, he will be our reason for going.