North Pole: Journey to the top of the World 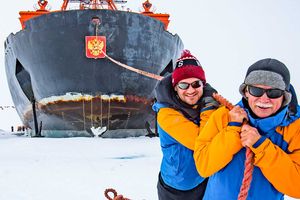 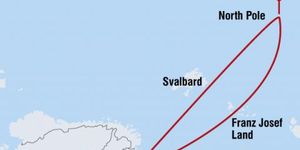 If there's one place you can really feel on top of the world, the North Pole is it. Few people ever have the surreal experience of seeing the world from its northernmost point. This is one trip with a distinct goal, and the feeling of accomplishing such a rare feat is a huge rush. Witness slow-moving ice, silent, white landscapes and marvel at the heroism of those who came before you. It's a tough voyage, but your transport is well equipped for the mission - 50 Years of Victory is the most powerful icebreaker ship in the world. Be awed as the mighty vessel crushes through ice three m thick, paving your way through the most northern reaches of the Arctic Ocean. And when it's time to head back home, wind down with a visit to Franz Joseph Land, where a bounty of wildlife and striking natural scenery awaits.

Day 1: Helsinki
Your adventure begins with one-night in magical Helsinki, Finland's capital. Staying up to the wee hours is easy in here, as daylight fades to twilight for only a few hours during summer.No arrival transfer included.

Day 2: Embarkation in Murmansk, Russia
From Helsinki, you’ll join your fellow passengers on the charter flight that will take you to Murmansk, Russia, where you’ll embark on your voyage to the North Pole and get acquainted with 50 Years of Victory, the world’s largest and most powerful icebreaker.

Day 3-6: Northbound in the Arctic Ocean
Being on board Victory and feeling the icebreaker as it crushes through the Arctic pack-ice is an experience you’ll never forget. Just as memorable is boarding the ship’s helicopter for a thrilling aerial view over the ship and the expansive Arctic Ocean. You can expect variable sailing conditions this far north. The crossing from Murmansk to the North Pole can take us anywhere from four to six days depending on ice conditions. This means you’ll have plenty of time to get to know your shipmates, be treated to lectures and discussions by our expedition team while keeping a lookout for bird life. There are also many wonderful amenities to take advantage of on board, such as the ship’s lap pool or basketball court.

Day 7: The North Pole - 90° North
All the anticipation reaches a climax as you reach the North Pole! Many travellers find themselves overcome with emotion, while others are in a festive and celebratory mood. Take photos, call your family, wave a flag; just be sure to enjoy your moment at the top! Later, everyone will celebrate with a champagne toast and a BBQ on the ice. If the opportunity allows, you also have the option of taking a Polar plunge into the icy waters around the North Pole. We’ll also attempt to launch passengers high above the pole in our hot air balloon to commemoratethis great moment (highly weather dependent).

Day 8: Southbound in the Arctic Ocean
On our return voyage you can sit back and relax. As you head further south, you may get lucky and spot polar bears hunting for seals.

Day 11-12: Southbound at Sea
Enjoy your time out on deck or reminisce with your shipmates and new friends as you cross the Arctic Ocean back to Murmansk.

Day 13: Disembarkation in Murmansk
Returning to Russia’s most northerly city, it will be time to bid farewell to your ship, 50 Years of Victory. You’ll be transferred to the airport for your charter flight to Helsinki, Finland, to enjoy one final night with your newfound friends.

Day 14: Helsinki
After breakfast, your official Quark Expeditions® journey comes to an end. We do encourage you to spend some extra time exploring Helsinki, Tallinn and other cities in the region.No departure transfer included.