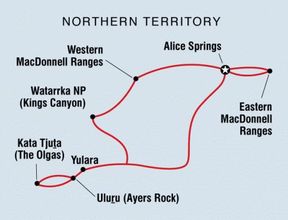 This 5-day small group tour is your chance to meet the outback on your own terms. No set itinerary, no rushing around to pre-established timeframes - just you, your small group, and a well-versed local leader exploring the Red Centre at your own pace. Get to all the big name attractions - Uluru/Kata Tjuta, Kings Canyon, the Western MacDonnell Ranges - and perhaps visit lesser-known sites like Trephina Gorge, Owen Springs, Ruby Gap and the Eastern MacDonnell Ranges.

Day 1: Yulara
Arrive in Yulara, where your Australian Outback adventure begins. A small town at the southern end of the Northern Territory, Yulara is your gateway to Uluru-Kata Tjuta National Park. Make tracks across sunburnt plains to the captivating domes of Kata Tjuta, large red rock formations believed to be about 500 million years old. Continue to Australia’ most iconic landmark – Uluru. Arrive in time to witness a magical sunset. Watch Uluru change colours as the sun sets below the horizon, then continue to your camp where a hearty dinner awaits. Choose to bunker down Aussie-style and sleep in a cosy swag (bedroll) beneath the star-studded sky, or catch some shut-eye in a permanent tent.Total walking time: about an hour

Day 2: Uluru Sunrise
Wake early to catch an unforgettable Uluru sunrise, then get a closer look at this massive sandstone monolith on an unguided walk around its base. After your stroll, walk to the cave paintings near Mutitjulu Waterhole, where you will be met by an Anangu guide. Your guide will shed insight into the ancient rock etchings and the stories they tell, as well as the traditions of the land’s Traditional Owners. Next, visit the nearby Cultural Central to browse its extensive collection of Aboriginal arts and crafts. After a local lunch, set off on a three-hour drive to your exclusive campsite within Watarrka National Park. (Kings Canyon). Get acquainted with your surroundings, enjoy an on-site dinner and settle in for the nightTotal driving time: about three and a half hoursToday walking time: about two hours

Day 3: Kings Canyon
After breakfast, pull on your hiking shoes and set off to explore Kings Canyon. Plunging 270 metres/885 feet to the canyon floor, walking its rim reveals incredibly beautiful sandstone formations carved by wind and water. Discover its Amphitheatre, Lost City, North and South Walls and the surprisingly lush Garden of Eden, which owes its cycads and plant life to a permanent waterhole down in the canyon. After lunch, there’s time to relax for a bit before heading along an iconic Red Centre dirt track to the Western McDonnell Ranges.Today driving time: about five hoursToday walking time: about three hours

Day 4: Western MacDonnell Ranges
Spend the afternoon exploring the Outback scenery of the Western Macdonnell Ranges. Visit one of the most photographed places in the Red Centre – Ormiston Gorge. Keep your eyes peeled for wallabies while admiring the colourful, sweeping walls surrounding its waterhole. Continue to Ellery Creek Big Hole, a popular spot for a refreshing dip. After a satisfying day spent exploring the MacDonnell Ranges, your tour leader will find a suitable place to set up your bush camp for the night.Total driving time: about 45 minutesTotal walking distance: up to 10 kilometres/6.2 miles

Day 5: Eastern MacDonnell Ranges
Often overlooked for its western counterpart, the Eastern MacDonnell Ranges just might be one of the Outback’s best kept secrets. This is the home of the Arrernte people, the Traditional Owners of the land. Learn about their caterpillar dreamtime story on a short walk to Emily Gap, an important spiritual site to the Arrernte people containing galleries of ancient rock paintings. Drive to Trephina Gorge, where you’ll set off on a one-hour guided walk to see its quartzite cliffs and rich birdlife. Afterwards, it’s time for lunch; grab a bite at the historical Ross River Homestead before continuing to the ‘Ghost Town’ of Arltunga where you’ll learn about the mistaken gemstone that lead to a mining rush here in 1887, and also precipitated its abandonment. After exploring the best of the Eastern MacDonnell Ranges, it’s on to Alice Springs where your Outback adventure ends upon arrival in the late afternoon.Total driving time: about 3 hours