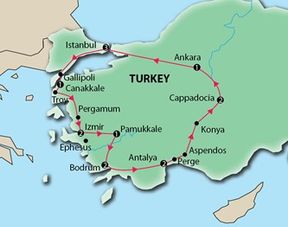 Day 1: Istanbul - Arrival
You will be transferred to your hotel in Istanbul and nbsp;upon arrival. and nbsp;(Your arrival transfer is included only if you arrive on the actual day the tour commences. For customers arriving earlier an individual transfer can be organized at an additional cost.) and nbsp;The rest of the day is at leisure until you meet your tour director and nbsp;for a welcome briefing.
Hotel: Conrad Hotel Istanbul (Deluxe and Superior)

Day 2: Explore Istanbul
Today, enjoy a full-day tour of Istanbul including a visit to Topkapi Palace, residence of the Ottoman Sultans between 1453 and 1852 (excluding harem). Visit the Hippodrome which was once the center of life where chariot racing and other public events took place. Tour the Blue Mosque built between 1609 and 1616, and nbsp;and famous for its blue ceramic tiles. Next, see St. Sophia, a church built in the 6th century and converted to a mosque by the Ottomans. It is now a museum and one of the world's greatest architectural wonders. Your last stop will be the famous Grand Bazaar, the world's largest and oldest covered market with over 60 streets. In the evening, consider joining an optional dinner with belly dancing entertainment. (B)
Hotel: Conrad Hotel Istanbul (Deluxe and Superior)

Day 3: Gallipoli - Dardanelles - Canakkale
In the morning, depart for Gallipoli, the site of many battles during WWII. Visit Anzac Cove, the Lone Pine Cemetery, and Chunuk Bair. Then cross the Dardanelles to Canakkale. (B,D)
Hotel: Kolin Hotel (Deluxe and Superior)

Day 4: Troy - Pergamum - Izmir
Visit Troy with its famous wooden horse, best known for being the setting of the Trojan War. Enjoy lunch with locals in a traditional village. and nbsp;Then continue to Pergamum and visit the ancient medical center Asklepion. Arrive in Izmir in the evening. (B,L,D)
Hotel: Swissotel Grand Efes (Deluxe and Superior)

Day 5: Ephesus and Virgin Mary's House - Izmir
Today, tour the ruins of Ephesus, an important cultural center of the ancient world, and explore the 2,000-year old marble streets, a theater, the Library of Celsius, a gymnasium, and Hadrian's Temple. Take a short drive to see the Virgin Mary's stone cottage. Continue to a regional rug production center to have firsthand experience of this unique art form. and nbsp;In the evening consider having an optional dinner at a local restaurant. (B)
Hotel: Swissotel Grand Efes (Deluxe and Superior)

Day 7: Pamukkale - Bodrum
After a morning at leisure, depart for Bodrum to visit the Castle of St. Peter and the renowned Underwater Museum. and nbsp;(B)
Hotel: Doria Hotel (Deluxe and Superior)

Day 8: Bodrum - (Kos)
Enjoy a day at leisure in Bodrum or consider joining an optional tour to the Greek Island of Kos. (B,D)
Hotel: Doria Hotel (Deluxe and Superior)

Day 10: Perge - Aspendos - Antalya
This morning, and nbsp;visit to the ancient Greek city of Perge, famous for its Temple of Artemis. Continue to and nbsp;Aspendos with its magnificently preserved 15,000-person theater. and nbsp;Return to Antalya and enjoy a relaxing afternoon by and nbsp;the Mediterranean Sea, an area known as the Turquoise Coast. and nbsp;(B,D)
Hotel: The Marmara (Deluxe and Superior)

Day 11: Antalya - Konya - Cappadocia
Early in the morning, depart for Konya to visit the mausoleum of the sufi philosopher Mevlana. Continue to Cappadocia, famous for it's "moon-like" landscapes. En route, visit a 13th century caravanserai and the famous underground city of Saratli. (B,D)
Hotel: Gamirasu Cave Hotel (Deluxe and Superior)

Day 12: Explore Cappadocia
Consider an early morning optional hot air balloon tour. Experience floating through the volcanic valleys, fairy chimneys and caves at sunrise. After breakfast, visit Goreme, a historical region of Turkey, located among rock formations. It was first settled back in the Roman period. Many rock churches can still be seen today, as Christianity was then the prevailing religion in that region. Continue to the town of Avanos, renowned for its high quality earthenware. Also visit Pasabagi and the Red Valley, and attend a brief regional pottery workshop in a cave. Enjoy dinner at an authentic local restaurant. Later in the evening, consider seeing an optional Whirling Dervishes performance. (B,D)
Hotel: Gamirasu Cave Hotel (Deluxe and Superior)

Day 13: Cappadocia - Ankara
Early in the morning, depart for Ankara. Enjoy an afternoon tour of the Museum of Anatolian Civilizations with its Hittite treasures and artifacts from the world's oldest city. (B,D)
Hotel: Hilton Ankara (Deluxe and Superior)

Day 14: Ankara - Istanbul
After breakfast, depart for Istanbul. In the afternoon, consider joining an optional cruise along the Bosphorus, the waterway that separates Europe and Asia. Its shores are lined with fine neighborhoods, Ottoman palace, fortresses, old wooden villas, hotels, parks and gardens, and restaurants and cafes. Make time for last-minute shopping at the Spice Market before a farewell dinner. (B,D)
Hotel: Conrad Hotel Istanbul (Deluxe and Superior)

Day 15: Istanbul - Return
You will be transferred to the Istanbul airport for your return flight home. (Your departure transfer is included only if you depart on the actual day the tour concludes. For customers departing later an individual transfer can be organized at an additional cost.) (B)