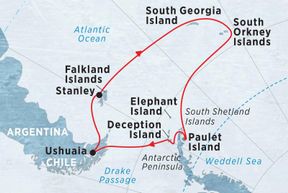 This 20-day expedition encompasses the wildlife paradise of South Georgia, the remote Falkland Islands and the extraordinary beauty of the Antarctic Peninsula. Experience a great diversity of landscapes and unprecedented wildlife viewing opportunities on twice-daily excursions led by polar experts. When the days are done, you can relax in comfort on board your vessel, listening to fascinating lectures or indulging in a spa treatment. This polar adventure is perfect for those who want to go beyond the standard itinerary for a greater understanding of the history and environments of the world's south.

Day 1: Ushuaia
Bienvenidos! If you’re flying into Malvinas Argentinas Ushuaia International Airport today, enjoy a complimentary transfer from to your pre-expedition accommodation. There are no activities planned for today, so feel free to strike out on your own if you have time. Ushuaia is a relatively small city and is easy to find your way around. From Avenida San Martin the streets run uphill and you can get a great view of the Beagle Channel from the top.

Day 2: Ushuaia - Embarkation Day
Today board the ship and embark through the beautiful Beagle Channel in the afternoon, leaving Ushuaia behind you. The channel is rich in wildlife, so rug up and head out on deck. The expedition team may be able to point out penguins, cormorants, petrels and Black-browed Albatross in the sea and air around you.

Day 3: At Sea
While out at sea there is plenty to keep you entertained on board. The series of presentations given by the onboard experts will begin during this time, so you can learn about Antarctic marine biology, history, geology and ornithology. Armed with this new knowledge, your Antarctic explorations and interactions with wildlife will be all the richer. You will also be prepped on safety procedures for Zodiac cruises and shore landings.

Day 4-5: Falkland Islands (Islas Malvinas)
Spend two days exploring the Falkland Islands (Islas Malvinas), home to incredible history and a treasure-trove of birdlife. Kelp Geese, rockhopper penguins and Magellanic penguins are native to the area. While itineraries in the region are impossible to plan in advance due to weather conditions, you can expect twice-daily Zodiac trips to explore various landing sites around the islands. Land excursions opportunities meeting the residents of Port Stanley, cruising around West Point Island in a Zodiac to search for Commerson’s dolphins or landing on the beaches of Carcass Island to watch gentoo penguins playing on the shore. It’s also possible to pre-book adventure options like kayaking for an entirely different perspective on this history-rich archipelago.

Day 6-7: At Sea
More onboard presentations over the next few days will prepare you for upcoming shore landings and Zodiac cruises along the coast of South Georgia. You'll know you’re in bona fide Antarctic waters when you cross the Antarctic Convergence – the biological boundary dividing Antarctica from the rest of the southern seas.

Day 8-11: South Georgia
Your first sight of South Georgia will be of snow-capped mountains. Keep an eye out for wandering albatross and giant petrels, and don’t be surprised if you spot the odd reindeer. Although Antarctica has no native land mammals, reindeer were introduced in the early 20th century by Norwegian whalers. Over the next four days, planned activities include a series of landings at king penguin rookeries, abandoned whaling stations and the lonely gravesite of Sir Ernest Shackleton. As always, potential excursions are determined by weather and ice conditions.POSSIBLE LANDING SITES IN SOUTH GEORGIADRYGALSKI FJORDThis is a photogenic and dramatic fjord, with sharp and jagged peaks rising out of the sea. Glaciation never reached the peaks of this fjord, giving it a unique landscape.GOLD HARBOURThe backdrop to this harbor is the hanging Bertrab Glacier. King and gentoo penguins call this home, as do rowdy elephant and fur seals.GRYTVIKENOnly a handful of people live, albeit temporarily, on South Georgia, a United Kingdom overseas territory. Two of them are curators of the South Georgia Museum, located in the former whaling station manager’s villa. The church was built for the whaling community and is the only building inGrytviken that is still used for its original purpose.PRION ISLANDRobert Cushman Murphy named this island for the species of petrels seen on the island. Birders will be pleased to know that wandering albatross are also known to nest on the island.SALISBURY PLAINOne of the largest king penguin rookeries on the island is located on Salisbury Plain. The Murphy and Lucas Glaciers flank the plain, creating a perfect backdrop for photographers.ST. ANDREW’S BAYThousands of breeding pairs of king penguin nest at St. Andrew’s Bay. It is the largest king penguin rookery on South Georgia and is a wildlife spectacle to behold. Reindeer introduced by Norwegian whalers are known to feed on the grass in the area.STROMNESSThis abandoned whaling station was in full operation the day that Ernest Shackleton and his companions staggered in after a 36-hour trek across the island. There is a small cemetery here, with the graves of 14 whalers.

Day 12-13: At Sea
Head south again, spending a few more education-filled days at sea en route to the Antarctic Peninsula. Armed with unlimited hot drinks and a warm parka, enjoy time on deck searching for wildlife. If conditions allow, the ship may attempt landfall on the South Orkney Islands, which are officially in Antarctica.

Day 14-17: Antarctic Peninsula
Changing conditions mean that each expedition is different, but your team will make sure that every one of your four days here are memorable. Venturing out on the Zodiac, you might visit a penguin rookery and the historic harbour of Port Lockroy one day, and watch icebergs calve around Petermann Island the next. Chinstrap, Adelie and gentoo penguins are found here, along with Weddell, fur, crabeater and leopard seals. Curious whales, such as minkes, are often attracted to Zodiacs, giving you a chance to really get up close. Perhaps take a 'polar plunge' in the freezing waters of Neko Harbour. The options for exploration are as vast as the Peninsula itself.

Day 18-19: Drake Passage
Journey homeward through the Drake Passage. This legendary waterway, named after Sir Francis Drake, separates the northern tip of the Antarctic Peninsula from South America. Spend your last days at sea appreciating the vast open waters, looking for wildlife and enjoying some final onboard presentations.

Day 20: Ushuaia – Disembarkation Day
Your expedition comes to an end on disembarkation n Ushuaia after an onboard breakfast. If you’re flying out of Malvinas Argentinas Ushuaia International Airport today, enjoy a complimentary transfer.