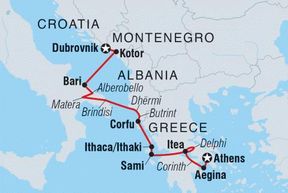 Set sail through the glistening waters of the Adriatic as you navigate the coastlines of Croatia, Montenegro, Albania, Italy and Greece. From the fortified walls of Dubrovnik to the pretty Italian villages nestled in the hills outside Bari, soak up the mystery and storied history of Ithika, enjoy an on-deck barbecue off the coast of Dhermi, witness the 12th century architecture of Kotor and experience island life along the quaint cobbled streets of Corfu. Maximise your time swimming off little-known Albanian beaches and discovering World Heritage-listed towns by spending some nights in port and some sailing overnight, meaning you'll wake up to a sunrise in a brand-new destination, waiting to be explored.

Day 1: Dubrovnik, Croatia
Welcome to Croatia and Dubrovnik, its glittering coastal gem. The city is adored by travellers for its walled Old Town whose cobbled streets twist and turn under distinctive orange roofs, and from the top of the wall you'll be treated to uninterrupted views of the impossibly blue Adriatic Sea. If you arrive in Dubrovnik early, then feel free to take a dip or stroll through town. Board your ship, the M/Y Callisto at 5 pm. After an orientation on the boat you'll sail overnight to Kotor, enjoying dinner on board prepared by your chef.

Day 2: Kotor, Montenegro
Wake to the World Heritage-listed city of Kotor on Montenegro's Adriatic coast. Explore the fortified town on foot once the boat has docked, taking in sights including Saint Tryphon Cathedral, which was built in the 12th century, and the ancient city walls. Travel by small boat to Perast, located north of Kotor in the Bay of Montenegro, and ride a local ferry out to the striking church islands, one of which hosts a 12th-century monastery and the other an 18th-century church. The small boat will transfer you back to Kotor (approx. half an hour), then once you're back on board you'll sail overnight across the Adriatic to Bari, the capital of Italy's Puglia region.

Day 3: Bari - Matera - Alberobello - Brindisi, Italy
Buongiorno! And welcome to the western side of the Adriatic. Arrive in Bari and travel with the group on private bus to two areas known for their jaw-dropping architecture. After approximately 1 hour and 30 minutes, arrive at Matera, claimed as the third-oldest continuously inhabited city in the world and one of Europe's 2019 Capitals of Culture. It's played host to film sets including Passion of the Christ and the new Ben Hur, and tourists flock to the stunning 'sassi' cave dwellings that dot the cliffs around town. It's hard to believe a place like this is real, but it lends itself to photography so fortunately you'll always have a reminder of its 9000-year-old existence. You’ll have some free time to enjoy lunch in Matera before travelling just over one hour in a private bus to Alberobello, a small town with hundreds of unique 'trullo' buildings, or 'trulli', which are whitewashed houses built from local limestone with conical roofs. Some of these World Heritage-listed dwellings were built as early as the 14th century and are recognised as an outstanding example of dry-stone construction. Once you've 'trulli' seen the Alberobello, travel on to Brindisi, a city south of Bari, where you'll board the Callisto for an overnight sail to Albania.

Day 4: Saranda, Albania - Butrint, Albania - Corfu, Greece
Relax as the Callisto cuts through the Adriatic before arriving into Saranda, Albania in the morning. Albania isn't on the radar of most travellers, but the beaches dotting the coastline are as beautiful as any on the Mediterranean. Travel overland to Butrint, a World Heritage site and national park. The area's occupation dates back tens of thousands of years and is noted by UNESCO for 'a special atmosphere created by a combination of archaeology, monuments and nature”. Spend some time exploring the sight before travelling back to Saranda for a deck BBQ lunch on board as you sail towards Corfu. Stop along the way for a refreshing swim stop before arriving at your destination for the evening, the Greek island of Corfu, where you'll have a night at port.

Day 5: Corfu - Ithaki, Greece
Spend the day exploring Corfu, the second largest of the Ionian Islands, which has long attracted travellers in search of sun and sun. Corfu Town displays unique architecture influenced by Sicilian, Venetian, French and English styles. It's kept many of its imposing buildings, elegant mansions, superb palaces, French-style flowered squares and beautiful fortresses, and is an absolute dream to explore on foot. Enjoy some free time after the walking tour, perhaps visiting Palaio Frouiro or simply soaking up island life on the beautiful stone streets. In the evening, sail south down the Greek coastline to Ithaki, or Ithaca, the island home to which Odysseus, the hero of Homer's epic Odyssey, strived so hard to return. Your journey won't be so perilous.

Day 6: Ithaki - Kefaloniato, Greece
Spend some time exploring the island of Ithaki, soaking up both its mythology and storied history, then sail westwards to Sami, a port town on the island of Kefalonia where Captain Corelli's Mandolin was filmed. Travel north to Lake Melissani, an area that was once home to nymphs – or so the legend goes. Excavations in 1962 uncovered oil lamps, plates and figures depicting the god Pan, and some believe that one of the nymphs drowned here after being rejected by Pan, god of the wild. Whether you believe the stories or not, the beautiful cave and lake is surrounded by forest and it certainly feels like there's a bit of magic about it. Perhaps visit the Ancient Acropolis of Sami, the remains of a heavily fortified town dating back to the Hellenistic period, before some free time in Sami. It's a picturesque little port with plenty of bars and restaurants, so why not take a stroll or settle in for a spot of people watching before sailing overnight to Itea.

Day 7: Itea - Corinth Canal - Aegina, Greece
Your boat will dock in Itea and from here you'll travel inland to Delphi (approx 30 mins), site of the Temple of Apollo and home to the famous Delphic oracle. The area is what the ancient Greeks believed to be the centre, or navel, of the world, the meeting point between two eagles released by Zeus to the east and west. It received World Heritage listing thanks to 'an immense impact through the ancient world,' and is one of those pinch-yourself places where history and legend seep from every crack and crevice. Afterwards, return to the boat and cruise to the Corinth Canal, which divides the Greek mainland from the Peloponnese and is just 21 metres wide at its base. Travel through the canal both in daylight and in awe of this engineering feat, emerging in the Aegean Sea. Enjoy a final evening with your fellow travellers on the island of Aegina, toasting this journey through four countries and thousands of years of history.

Day 8: Athens, Greece
This Adriatic cruise comes to an end today in Athens, Greek's historic capital and the heart of Ancient Greece, overflowing with sights like the Acropolis, the Parthenon and more. Say your farewells and if you have any time to spare, we highly recommend extending your stay to take it all in.