Crossing the Antarctic Circle from Ushuaia

Crossing the Antarctic Circle from Ushuaia 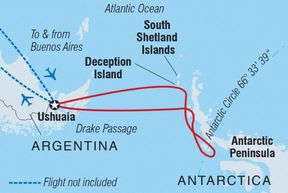 Cast off from Ushuaia, Argentina, to embark on an adventure to one of the most beautiful and remote locations on the planet. Sail across the notorious Drake Passage bound for the South Shetland Islands and the Antarctic Peninsula. Explore a world covered in ice and snow; marvel at the odd shapes and spectacular hues of drifting icebergs; spot albatross, cormorants, seals, penguins and whales; and discover the land of the midnight sun - the blues and whites of Antarctica are truly breathtaking.

Day 1: Ushuaia
Bienvenidos! Welcome to Argentina.Begin your Antarctic Explorer adventure with an overnight stay in Ushuaia – capital of Argentina’s Tierra del Fuego province, and southernmost city in the world.Ushuaia, affectionately known as 'fin del mundo' (end of the world) due to being the southern most city of the world, has a lot to offer. A relatively small city of 42,000 people, it is easy to find your way around. Av. San Martin and the surrounding streets is where you will find most hotels and tourist services. Here you can stroll along and visit the shops, museums and restaurants. From Av. San Martin the streets start to run uphill. From the top of these streets you will have a good view of the Beagle Channel. Another option if you arrive early is a visit to Tierra del Fuego National Park, which is located 11km (7 miles) west of the city.

Day 2: Embarkation
Today you join your ship and begin your trip by cruising through the beautiful Beagle Channel. Named for the British ship HMS Beagle, this channel is particularly rich with birdlife, and you may sight penguins, cormorants, petrels, and Black-browed Albatross.

Day 3-4: Drake Passage
Prepare for rough seas, but don’t be disappointed if you experience smooth sailing across this legendary waterway. The 500-mile-wide passage separates the bottom of South America from the tip of the Antarctic Peninsula, and was named for famed English explorer (and sometime pirate) Sir Frances Drake.

Day 8-9: Antarctic Circle
Crossing the Antarctic Circle is an impressive achievement. Few other expeditions to the Peninsula reach the imaginary line at 66° 33’ S. You may wish to celebrate with your shipmates in style with a glass of champagne.This is a part of the world still visited by very few people and is home to the midnight sun, Weddell seals, and some of the most magical, odd ice formations you'll see anywhere in Antarctica.THE ANTARCTIC CIRCLEWhile not a typical landing, the crossing of the Antarctic Circle is a moment to remember. The event will usually happen while at sea, so be sure to head up to the bridge and snap your photo of the GPS reading 66° 33’ S.

Day 10-11: Antarctic Peninsula
We spend the next two days travelling north along the western Antarctic Peninsula back up to the Drake Passage. We'll continue to journey onto land and out by Zodiac twice daily along the way. You Expedition Team will continue to be on the lookout for any species of penguins, seals or whales that you may have missed on the journey south.

Day 12-13: Drake Passage
We leave Antarctica behind and head back across the Drake Passage. The Expedition Team will round up their series of lectures as well, perhaps with a slideshow of some of the great landing sites and wildlife you’ve visited over the course of your voyage before we cruise back to Argentina.

Day 14: Disembark in Ushuaia
In the morning we arrive back in Ushuaia where we have a shipboard breakfast before the trip ends. If you are flying out today you’ll be transferred to the airport for your flight home.When booking your flight please remember that delays can occur, so we recommend not booking a flight before about midday.