Cape Cod, The Islands and Newport 2020

Cape Cod, The Islands and Newport 2020 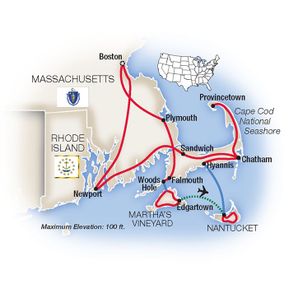 Step back in time as you travel through historic New England, exploring centuries of history on Nantucket, Martha’s Vineyard, Cape Cod and in Newport.Relive 17th-century life at Plimoth Plantation and visit a whaling museum in Nantucket. Special experiences include explorations in Martha's Vineyard and Nantucket... a whale-watching cruise off the shores of Provincetown... a sightseeing cruise of Newport Harbor and Narragansett Bay... and a tour of "The Breakers," one of Newport’s most extravagant Gilded Age mansions.


Tour begins: 5:30 PM, The Lenox Hotel. A transfer is included from Logan International Airport to The Lenox Hotel, perfectly situated in the heart of Boston's picturesque Back Bay neighborhood. A welcome reception at your hotel this evening, followed by a welcome dinner at a local restaurant, gets your New England vacation off to a wonderful start!


From Boston, travel to Plymouth to step back in time at Plimoth Plantation, a re-created 17th-century village with costumed living historians who bring the folkways of the Plimoth Colony, one of the earliest English settlements in North America, to life; see Plymouth Rock, marking the Pilgrims' 1620 landing site. After some free time in Falmouth, a ferry ride from the mainland takes you to the island of Martha's Vineyard. Whether you call it chic, fashionable, posh, quaint, charming, or trendy, it is one of the hottest New England vacation destinations of the 21st century – and where you'll spend the next two nights in the former whaling center of Edgartown.


You'll bridge the centuries by exploring the Vineyard today. Start your sightseeing by admiring the historic stately homes in Oak Bluffs and Vineyard Haven. Take in the salt marshes, long beaches, and picturesque yacht harbors in the town of West Tisbury before finishing in Edgartown with a visit to the Carnegie Museum. Built in 1904, the Carnegie Museum was given to the town as a gift for its citizens by Andrew Carnegie and served as the town library from 1904 to 2016 before being reopened to the public in 2018. Inside, learn about the rich history and development of the island before embarking on a walking tour of the various historic & architectural sites near and on Edgartown Harbor (at a pace of your choice) followed by an exclusive private reception at Norton Boathouse. The rest of the day is yours to spend as you wish.


Weather permitting, today we will visit Nantucket Island, which three centuries ago was the whaling capital of the world. A short 15-minute flight takes you to the home of unspoiled beaches, lone lighthouses, sea captains’ houses and art galleries. While here, enjoy a guided sightseeing journey around the island, as well as a visit to the Nantucket Whaling Museum at your leisure. Your destination tonight is the quaint seaside village of Chatham, where you will feast on a New England lobster and clam dinner.


Journey up along the outer Atlantic side of the Cape to visit Cape Cod National Seashore, with its massive sand dunes towering above crested seas. Arrive in Provincetown on the tip of the Cape; once a key whaling town, it has become world-renowned over the last century as an arts colony and a major summer resort. "P-Town" is set near the summering grounds for a number of whale species; weather permitting, take a guided whale-watching cruise to see these amazing aquatic mammals roll, flip their tails, and blow through their blowholes – a true highlight of your New England vacation. Have dinner back at your resort in Chatham this evening.

Day 6: On to legendary Newport


Leave the Cape this morning and head along the coast to historic Newport, Rhode Island, with a stop en route for lunch in – believe it or not – the town of Sandwich! Newport is renowned as a long-time haven for yachting enthusiasts, former home of the America's Cup, and one of the great playgrounds of the rich in the 19th and early 20th centuries. Drive past some of the ostentatious mansions that served as summer "cottages" for affluent socialites during the Gilded Age, and explore the celebrated Ten-Mile Drive; your home for the next two nights of your New England vacation is set right on Newport Harbor.

Day 7: The Breakers, a bay cruise & more in Newport


Your Tauck Director begins the day with a guided stroll along Newport's Cliff Walk, set between the sea and the mansions. See the opulence of the 19th century's Gilded Age firsthand on a visit to "The Breakers," a 70-room Italian Renaissance mansion inspired by the 16th-century palaces of Genoa and Turin. This palatial "summer cottage" built by Cornelius Vanderbilt is now a National Historic Landmark. Following an afternoon spent exploring more of Newport on your own, enjoy a delightful cruise through Newport Harbor and Narragansett Bay. Your cruise ends with your arrival by boat at Forty 1° North Marina Resort, the city's newest luxury waterfront venue, to cap your New England vacation at our exclusive farewell cocktail reception and dinner overlooking Newport Harbor.

Step back in time as you travel through historic New England, exploring centuries of history on Nantucket, Martha’s Vineyard, Cape Cod and in Newport.Relive 17th-century life at Plimoth Plantation and visit a whaling museum in Nantucket. Special experiences include explorations in Martha's Vineyard and Nantucket... a whale-watching cruise off the shores of Provincetown... a sightseeing cruise of Newport Harbor and Narragansett Bay... and a tour of "The Breakers," one of Newport’s most extravagant Gilded Age mansions.

This was my first Tauck Tour per recommended highly by Tahlon, Travel Advisor with Affordable Tours. I was deeply saddened to hear of his leaving the agency as he was by far one of the BEST Advisors I have EVER dealt with. It was because of him I decided to go on this Cape Code and New England Tour 2019. I must say his recommendation out stood the test. Denise, Tour Director was exceptionally knowledgeable about the sites on the tour, she offered some most helpful suggestions and tips along the trip. She had a friendly personality, extremely professional and always willing to help and resolve any issues that she felt that may occur. Our terrific Bus Driver was Evan who was so kind, patient, friendly and professional. He provided excellent service and help and taking extra precautions to get our group to where we needed to go. I was pleased and highly impressed with the quality of service Tauck provided . Everything was arranged professionally and worked out well. The tours were wonderful, with wonderful foods and great hotels. My one suggestion to Tauck is that on the departing boat ride, reception and dinner is to get an enclosed boat. Everyone was cold due to the wind, hair blown all over our heads and it was not an enjoyable boat ride due to the TIMING WAS POORLY PLANNED. All of the ladies getting off the boat looked like wild women with their hair blown. This boat needed to be enclosed rather than open or offer the boat ride at a different time and not before the reception and dinner. I did not enjoy this boat ride at all due to the cold element of the wind. OVERALL THE TOUR WAS EXCELLENT!!!!! Thank you and I am so happy that I went on this tour.

This Tauck Tour of Cape Cod, The Islands was exceptional. The tour guide and the driver were exceptionally friendly, informed and courteous. All the amenities; the food, the lodging, the side excursions were excellent. I would recommend this trip to anyone. P.S. The tour even send extensive information before the tour to inform and prepare us for touring this area of the country, telling us how to pack and providing all the necessary information to prepare us for emergencies and other contingency plans. Very helpful.