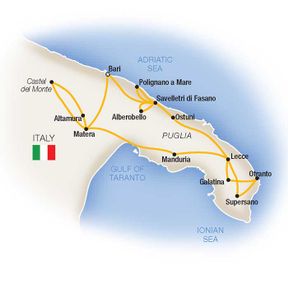 Explore the long heel of Italy’s boot to discover sights, tastes, and gorgeous seascapes you’ll find nowhere else... like Matera, where the Sassi houses are caverns and the streets are sometimes the roofs of other houses... Trulli houses, tiny fairy castles made of limestone slabs, built without mortar... D iscover Renaissance frescoes in Galatina. Stay multiple nights in “masserias,” fortified 16th-century farmhouses turned into elegant hotels. Enjoy wine and olive oil tastings at vineyards yet undiscovered by the maddening crowds… tour of a medieval castle enticing with soul-stirring views and wines… and meals tempting with bounty of the sea and land...

Day 1: Arrive in Bari, then welcome to Matera


Tour begins: 6:00 PM, Palazzo Gattini, Matera. We will meet you upon arrival at Bari Karol Wojtyła Airport on your trip to Puglia, Italy and transfer you to your luxury hotel, set in a 15th-century stone palace in the UNESCO World Heritage Site of Matera in Puglia. Nestled on the tip of Italy’s boot, Puglia welcomes with seaside delights, mouthwatering cuisine and entire cities resplendent in art, architecture and warm hospitality. Join us this evening for a rooftop welcome reception, followed by dinner in a local restaurant, and experience your first taste of Puglia’s enticing cultural delights.

Day 2: The Sassi of Matera & a 13th-century castle


Today you'll hop aboard a tuk-tuk for a ride through the winding streets of Matera in Basilicata, home to a settlement of cave dwellings that dates back to Paleolithic times – and one that starred in Mel Gibson’s film, The Passion of the Christ. As you explore this UNESCO World Heritage Site, our local guide shares insights about Matera's famous rock dwellings, known as Sassi (for "stone"), which you'll see piled haphazardly atop one another across the sides of a steep ravine; they began back in antiquity as natural caves and grottoes, and over the centuries were adapted as homes, and were lived in until 1960. Go inside a typically furnished cave home, before driving to Alta Mura, the “City of Bread” for a taste of local life. Take a guided tour inside 13th-century Castel del Monte this afternoon, one of the best-preserved castles in southern Italy and a UNESCO World Heritage Site; it also is featured on the Italian version of the one-cent euro coin! Spend the evening at leisure back in Matera.


Drive through the countryside to Lecce today, stopping en route at a winery known for its Puglian Primitivo wine. Enjoy a tasting tour and lunch and continue on to your hotel in Lecce. A guided walking tour of the city's 300-year-old cobblestone streets includes a close look at its Baroque monuments and architectural sites that give credence to Lecce's nickname as the “Florence of the South" – the ornate 15th-century Chiesa di Santa Chiara; the 2nd-century Roman Amphitheater, unearthed in 1901; the Piazza del Duomo; and the allegorically dressed Basilica de Santa Croce, a must-see site. Spend the remainder of the day exploring as you wish.


Head to nearby Galatina, home of the “Tarantella,” for a tour of the Basilica di Santa Caterina d’Alessandria where you will view impressive frescoes depicting biblical stories. On a visit inside the Baroque Chiesa di San Paolo, see the church well that was reputed to have healing powers from magic spiders. After lunch, drive to the fortified seaside town of Otranto for a guided walking tour of its historic sites. See its famous castle and visit its medieval cathedral, home to a magnificent floor mosaic (and wooden coffered ceiling) along with its macabre crypts. Dinner tonight at an authentic masseria delights with a family-style farm-to-table menu that showcases ingredients grown on site and “Officina Zoe” pizzica folk music and dance.

Day 5: Through Puglia to Ostuni & on to your masseria


Spend the morning at leisure, before driving to an Apulian masseria for a tour of its grounds and a lunch featuring locally produced ingredients. En route to your masseria hotel in Savelletri di Fasano, explore the multi-level medieval city of Ostuni, charming with whitewashed houses.


Regulated by an edict enforced by the Kingdom of Naples in the 15th century, mortarless buildings and home in the southern region of Puglia called trulli were constructed only of stone during that time, with many still standing distinctively intact today. Today, visit the "barnyard district" of Rione Aia Picola in the town of Alberobello, tightly packed with alleys lined by whitewashed trulli once inhabited by the farmers who built them. There no shops or cars here, lending to the authenticity of this unique experience. See the Trulli Sovrano, the town’s only two-story trullo and its most impressive, built in the 18th century for a local priest and today a museum of religious relics. You'll have some time at leisure to explore more on your own and sample a taste of local fare. Join us for dinner this evening at a local restaurant.


Built into a rugged ravine pitted with caves and painted with deep blue grottoes, the seaside town of Polignano a Mare is renowned for its cliff diving; for inspiring the 1958 international hit song "Nel blu dipinto di blu" (a.k.a. “Volare”) by Italian singer, songwriter, actor and Parliament member Domenico Modugno (who was born here); and, according to the locals, for its ice cream. Enjoy time to wander in town before returning to your resort. Join us for a farewell dinner tonight.


Trip ends: Savelletri di Fasano. Fly home anytime. A transfer is included from Masseria Torre Coccaro to Bari Karol Wojtyła Airport or Brindisi Airport, regardless of time or day of departure. Ask at booking about extending your stay with additional hotel nights in Savelletri di Fasano or in Bari. You should allow three hours for flight check in.

Explore the long heel of Italy’s boot to discover sights, tastes, and gorgeous seascapes you’ll find nowhere else... like Matera, where the Sassi houses are caverns and the streets are sometimes the roofs of other houses... Trulli houses, tiny fairy castles made of limestone slabs, built without mortar...Discover Renaissance frescoes in Galatina. Stay multiple nights in “masserias,” fortified 16th-century farmhouses turned into elegant hotels. Enjoy wine and olive oil tastings at vineyards yet undiscovered by the maddening crowds… tour of a medieval castle enticing with soul-stirring views and wines… and meals tempting with bounty of the sea and land...

This is a wonderful tour of the area in heel of Italy's boot. The food is different from that of Northern Italy (Rome and above) and the bread styles breads are terrific.. The guides were very knowledgeable about the ancient history of this area.

after many trips with other operators, this was our first tauck tour. it focused on fewer sites but was clearly first class with respect to accommodations, group size (20), food, and special events/visits (with one exception) compared to prior tours. the exception was the visit to a distant castle which killed a whole afternoon and was nice to look at from the outside but had virtually nothing inside it. overall, i'd say one needs to decide if they want higher quality hotels and food, smaller group, everything prepaid, and more leisurely tour or visit more locations on a longer tour with a larger group (32-40), lower quality accommodations and food, with a variety of optional side tours available to purchase.