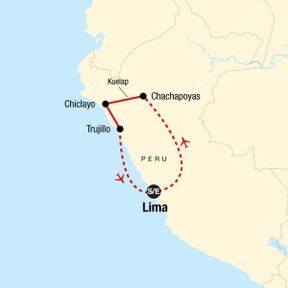 Immerse yourself in culture and history of the Chachapoyas, Hike through the cloud forest to the Gocta waterfall, Visit vibrant coastal cities rich in cultural history, Explore a series of tombs built by the pre-Inca Moche culture, Wander through the adobe brick city of Chan Chan

Venture off the beaten path to discover ancient vestiges of north Peruvian cultures. Explore fortified cities that were once bustling hubs of early civilizations; peruse museums brimming with archaeological treasures; visit burial tombs used by pre-Inca cultures; and encounter the ruins of Chan Chan, abandoned by the Chimu people in 1470. See a side of Peru that few travellers experience, and gain a greater understanding for the country's ancient past.

Day 1: Lima
Arrive at any time. Arrival transfer included.
Activity: The adventure begins tonight. Feel free to explore before your welcome meeting, but make sure you're back in time to meet the group. Check for the meeting time on the welcome note at the hotel. After introductions, your CEO will review the details of your tour. Please note that normal check-in times apply at our start hotels, but you can usually store your luggage for the day if you arrive early.
Accommodation: Hotel Antigua Miraflores (or similar)

Day 2: Lima/Chachapoyas
Board an early flight to Jaen, then travel overland to Chachapoyas, gateway to the archaeological sites of northern Peru. "Chacha" as it's known locally, will be our base for exploring the natural, cultural, and archaeological highlights of the region.
Transport: Look! Up in the sky! It's a bird! It's a plane! It's... yup, it is a plane, actually.
Transport: Settle in and scan the scenery from the convenience of a private vehicle.
Accommodation: Casa Hacienda Achamaqui (or similar)
Meal(s): Breakfast

Day 3: Gocta Falls
Hike through the cloud forest to Gocta waterfall, one of the world's tallest cascades, 771 meters (2,156 feet) high. Ancient legends that discouraged local community members from talking about the falls, which did not begin receiving visitors until 2005 and are still relatively unknown. Take in Gocta's mesmerizing spray; then opt for a longer hike to its base, or enjoy a free afternoon.
Activity: Well-known to local people of the area for centuries, Gocta Falls was unknown to the outside world until 2005. The impressive falls, standing 771m (2156 ft) high are amongst the tallest in the world. Begin at the town of San Pablo de Valera and hike through sugar cane farms and cloud forest to reach the Gocta Falls lookout.
Accommodation: Casa Hacienda Achamaqui (or similar)
Meal(s): Breakfast

Day 4: Kuelap Fortress
This morning, get immersed in the culture and history of the Chachapoyan people at Kuelap, a fortified city made up of more than 400 circular buildings and complexes. Ride a cable car up to the site, thought to have been an important cultural center for these pre-Inca "Cloud Warriors." Learn about coffee harvesting at a sustainable coffee farm before tasting coffee from the area. Later, try to spot some of the 130 bird species that live in the surrounding ecological reserve, including the spatula-tailed hummingbird.
Activity: Often referred to as 'Machu Picchu of the North', Kuelap pre-dates it's well-known neighbour to the south by 400-600 years. Built by the Chachapoyan people in the sixth century AD, Kuelap was rediscovered in 1843. With over 400 circular buildings perched on top of a mountain, this fortified city is an architectural wonder. Ride up in a cable car for stunning views of the surrounding area.
Activity: Join a local host and expert to visit a family-run sustainable coffee farm. Using an agroforestry system, they produce Café Amazilia, a speciality coffee grown inside the Andean sub-tropical forest, 2,000m (6,562 ft) above sea level. You will discover how a previously deforested area was regrown by planting native tree species around the coffee crops, hearing about pre- and post-harvesting processes and enjoy a tasting of sustainable coffee. After, you'll sit down with your fellow travellers to a delicious lunch featuring locally-sourced ingredients.
Activity: Home to over 130 different types of hummingbirds and five endemic species the ecological reserve is perfect for birdwatching. Keep your eyes peeled for the spatula-tailed hummingbird.
Accommodation: Casa Hacienda Achamaqui (or similar)
Meal(s): Breakfast Lunch

Day 5: Chachapoyas/Chiclayo
Today, drive to Chiclayo. This coastal town, founded in the 18th century, was once an important trade route between the coast and the jungle and is rich with archaeological sites and cultural history. Spend the rest of the day exploring the city on your own.
Transport: Settle in and scan the scenery from the convenience of a private vehicle.
Accommodation: Casa Andina Select Chiclayo (or similar)
Meal(s): Breakfast Lunch

Day 6: Chiclayo
Enjoy a visit to one of the most archaeologically rich museums in Peru: the Royal Tombs of Sipán Museum. In the afternoon, explore the tombs of Huaca Rajada and Lord Sipán, a series of burial chambers used by the pre-Inca Moche culture.
Activity: Modelled after the pyramids where the 13 tombs were uncovered in the 1980s, the Royal Tombs of Sipán Museum houses one of the most impressive collections of pre-Colombian burial artifacts in South America. With no written record of the civilization, the painted pots and artifacts give a glimpse into the height of Moche culture and the fascinating rituals that took place over 1500 years ago.
Activity: The excavation of the Huaca Rajada complex in 1987 uncovered a series of burial sites from Moche's elite including the Lord of Sipán a Moche warrior priest. His tomb is one of the most decorated tombs found untouched by looters in South America. Complete with gold, ceramics, jewelry, sacrificed animals, and six other people thought to be servants or members of his family.
Accommodation: Casa Andina Select Chiclayo (or similar)
Meal(s): Breakfast Lunch

Day 7: Chiclayo/Trujillo
Drive down the coast to colonial Trujillo, stopping along the way at the tomb of the Dama de Cao. Tour the site and hear about the mummy discovered here in 2006, thought to be the remains of the Lady of Cao, a high-ranking Moche ruler. In the afternoon, explore Trujillo to discover baroque churches and local markets.
Transport: Settle in and scan the scenery from the convenience of a private vehicle.
Activity: Visit the El Brujo Archaeological Complex where a female Moche mummy coined the Dama de Cao (Lady of Cao) is housed. Discovered in 2006 Dama de Cao was found wrapped in multiple layers of fabric with gold weapons and other fine objects concealed in the different layers. With distinct tattoos covering her arms, burial weaponry typically found with Moche men, and a larger mummy wrapping she is thought to be of high standing in the Moche culture, but her exact title and role remain a mystery.
Activity: Visit the Plaza de Armas and the yellow Trujillo Cathedral originally built in 1647. Continue to explore the city's highlights with a local guide to describe the architecture and history of this coastal city.
Accommodation: Casa Andina Standard Trujillo (or similar)
Meal(s): Breakfast

Day 8: Chan Chan/Lima
Visit the Temples of the Sun and the Moon. Later, enjoy a visit to Chan Chan, a UNESCO World Heritage site and the world's largest adobe city. The former capital of the Chimu people, Chan Chan covers 26 square kilometers (10 square miles) and was once home to about 50,000 people. Fly back to Lima this evening.
Activity: Visit the Huacas del Moche made up of the Temple of the Sun (Huaca del Sol) and the Moon (Huaca de la Luna). These adobe brick temples each served a specific purpose for the Moche people that predated the Inca to the south. The larger Temple of the Sun was used for administrative and military purposes and is thought to be made of over 100 million adobe bricks. The Temple of the Moon was a ceremonial temple thought to have been used for religious ceremonies including human sacrifices.
Activity: Visit the ruins of Chan Chan, the capital of Peru's largest pre-Inca empire, located 5km (3.1 mi) away from the city of Trujillo. Abandoned in the 1470s after the Inca army overran the city, it is now approximately 5,000 acres of eroded adobe.
Transport: Look! Up in the sky! It's a bird! It's a plane! It's... yup, it is a plane, actually.
Accommodation: Hotel Antigua Miraflores (or similar)
Meal(s): Breakfast

Day 9: Lima
Depart at any time.
Activity: Not ready to leave? Your CEO can help with travel arrangements to extend your adventure.
Meal(s): Breakfast

Outstanding trip and tours with plenty of opportunities for planned and unplanned adventures. Knowledgeable, friendly, and capable guides who kept us moving while allowing adequate free time for exploring on one's own.

Affordable Tours was helpful, answered all questions, booked tour and all flights for us. Great experience! We will definitely book through AT again.