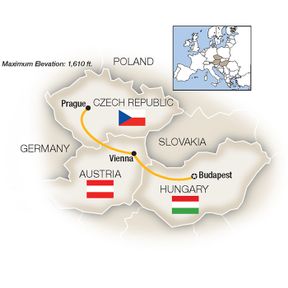 Hungary, Austria and the Czech Republic... once the heart of the old Habsburg Empire, traces are still to be found everywhere.  Traditions... The legacies of long-ago empires are everywhere in and around the grand cities of Prague, Vienna and Budapest are still here to be explored, still to be embraced.  Some are brick-and-mortar, like the Baroque splendor you'll discover at Vienna’s Schönbrunn Palace, or the mysterious corners of Charles Bridge in Prague. Others are undying traditions that continue to define the culture long after the empire ceased to be... like the only way to make authentic Hungarian strüdel. Experience the arts and culture that were the heart and soul of the Habsburg Empire... cruising legendary rivers... reveling in unrivaled palaces and cathedrals... enjoying a classical music concert... and savoring the timeless strüdel.


With a proud past as the once-independent cities of Buda and Pest, Budapest boasts a rich cultural history and some of Europe’s most striking architecture. Start your exploration with a sightseeing tour of the Pest side of the city, including a visit to the Great Synagogue. Enjoy lunch on a private cruise along the Danube, then pay a visit inside Hungary's famous neoclassical Parliament Building, set on the bank of the Danube. Spend the rest of the afternoon and evening exploring as you please in Budapest.

Day 3: The Opera House and Strüdel


Today's discoveries begin with a special visit to Budapest's opulent Hungarian State Opera House, opened in 1884, with its gilded vaulted ceiling, murals, royal boxes and three-ton chandelier. After a visit to Gellert Hill, learn the art of authentic Hungarian strüdel making with a hands-on demonstration at lunch at the First Strüdel House of Pest. Depart Budapest this afternoon and head to Vienna, Austria for a 3-night stay at the Hotel Imperial. An included dinner at your hotel can be enjoyed either tonight or tomorrow night.


Must-see sightseeing in Vienna this morning features a drive along the city's historic Ringstrasse (Ring Boulevard) with views of the famed Prater amusement park and the Danube River, and a walking tour through the courtyards of the Hofburg – once the royal palace of Austria-Hungary's ruling Habsburg family, which today is Austria’s official presidential residence. After some free time on your own, set off for a guided visit to the stunning Belvedere Museum – one of the world's greatest art museums, set within two historic 18th-century Baroque palaces – including its spectacular gardens. Early this evening, join us in the hotel’s opulent Marmorsaal (Marble Hall) for a Tauck Exclusive: champagne, followed by a performance and demonstration by students from Vienna's prestigious Elmayer Dance School. Bring your dancing shoes, because they’re going to teach you Viennese ball etiquette, waltzing and more. The rest of your evening is yours to enjoy as you wish in incredible Vienna.


Vienna’s Schönbrunn Palace was Habsburg Empress Maria Theresa’s attempt to outdo Versailles; did she succeed? You can make your own decision on a private tour of the Imperial Apartments. Afterwards, you have a choice of walking tours – one on which you'll see great Viennese cultural institutions like the Musikverein concert hall and Theater an der Wein, or another featuring the city's Cold War legacies, concluding with a private guided visit to The Third Man Museum, dedicated to the classic 1949 film noir thriller set in (and partially filmed in) Allied-occupied, post-World War II Vienna. Following a free afternoon, enjoy dinner at Café Central on the ground floor of the Palais Ferstel – a Vienna institution renowned as a literary and political hangout since the late 19th century – followed by a private classical music concert for Tauck guests only!

Day 6: On to Prague and a Private Cruise


Depart remarkable Vienna this morning and travel from Austria into the Czech Republic, arriving in its ancient capital city, Prague. This afternoon, take a walking tour of the city's Jewish Quarter, with stops at the Jewish Museum, which in its early 20th-century Functionalist home actually survived both World War II and the Cold War, and today houses one of the largest collections of Judaica in the world and the Pinkas Synagogue, Old Jewish Cemetery and Spanish Synagogue. This evening, join us for a private cruise along the Vltava River before disembarking for dinner at your hotel.


Prague’s skyline bristles with seven centuries’ worth of towers, earning the nickname “City of 100 Spires.” Discover its heart with sightseeing that begins in the Hradcany (Castle) district; while there’s really no “castle,” the Prague Castle complex includes the Royal Palace, Belvedere Palace, a web of gateways, courtyards and gardens, and the magnificent Gothic Cathedral of St. Vitus. Your walking tour is preceded by our Tauck Exclusive private tour of the grand Baroque libraries of Strahov Monastery, resplendent in design and decoration, bound to be a highlight of your day; you’ll have the opportunity to view treasures that other visitors won’t see. After free time for lunch in the city's Lesser Town, join us on an afternoon walking tour through Prague's ethereal Old Town – including centuries-old treasures like the iconic Charles Bridge, the Astronomical Clock and the Powder Tower, along with the Art Nouveau Municipal House. Tonight, enjoy a farewell cocktail reception followed by dinner in your hotel's St. Thomas Brewery Bar – once part of the original monastery – with entertainment by a musical quintet.

Hungary, Austria and the Czech Republic... once the heart of the old Habsburg Empire, traces are still to be found everywhere. Traditions... The legacies of long-ago empires are everywhere in and around the grand cities of Prague, Vienna and Budapest are still here to be explored, still to be embraced.  Some are brick-and-mortar, like the Baroque splendor you'll discover at Vienna’s Schönbrunn Palace, or the mysterious corners of Charles Bridge in Prague. Others are undying traditions that continue to define the culture long after the empire ceased to be... like the only way to make authentic Hungarian strüdel. Experience the arts and culture that were the heart and soul of the Habsburg Empire... cruising legendary rivers... reveling in unrivaled palaces and cathedrals... enjoying a classical music concert... and savoring the timeless strüdel.

Wonderful Tauck Tours..we will travel with them again..thank you for the suggestion..

This is our 7th Tauck tour/river cruise and they have never disappointed.

Ms Lawren Farias was our agent. She went out of her way to make sure that everything went smoothly and it did I would defiitely use her again. She was outstanding.

Maya was absolutely wonderful! I only want to book with her for any future travel.

The Tauck tour exceeded our expectations.Our tour director was exceedingly well informed and organized.She was the best.

The tour was one of our best. Tauck's attention to detail and covering nearly 100% of our costs or fees and booking 5* hotels is why we liked the trip.

Fantastic vacation! Exceeded all our expectations! Trip of a Lifetime!!!

Tauck delivered as promised and more. The tour director was very helpful and knowledgeable. We wouldn't hesitate to book with them again.

Tauck provides great tours. This is our 4th with Tauck. They provided transport for us even when our itinerary was different than usual. The Tauck tour director was wonderful.

The Tour director (Mark) is excellent, the accommodation were first class and convenient and most included meals were very good. We also were blessed with a wonderful group of fellow travelers which I believe is due to Tauck's reputation.

Tauck does a wonderful job in providing a variety of great travel experiences in a worry free environment where every small detail is taken care of.

Both AffordableTours.com and Tauck are very professional organizations who ensure your traveling experiences are exceptional. Highly recommend both and we keep coming back to book with both.