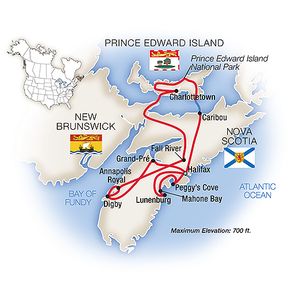 A legacy of seafaring gems… think seaside shanties, picturesque fishing hamlets, colorful 19th-century timber homes, and wildlife-rich waters. Private evenings in historic Halifax include the Citadel, and moving stories of Canadian immigrants at Pier 21, two nights on Prince Edward Island, immortalized in novels, and whale watching promise lasting maritime memories.Whale-watch at Digby Neck on the Bay of Fundy. Attend a Tauck Exclusive private dinner and tour at the Halifax Citadel, and a private reception and dinner at Pier 21 National Historic Site. Choose a walking tour of historic Lunenburg or a visit to a fisheries museum, watch history come alive at the Habitation at Port-Royal and tour the P.E.I. farmhouse where the popular novel Anne of Green Gables was set.


Tour starts: 5:30 PM, The Prince George Hotel. A transfer is included from Halifax International Airport to The Prince George Hotel in the heart of historic Halifax. Kick off an exciting week with a welcome reception in Halifax at Pier 21, "Gateway to Canada," which features exhibits chronicling 20th-century Canadian immigration and the poignant multimedia production, Oceans of Hope.


From Halifax, start the day with a visit to Peggy's Cove – a picturesque Nova Scotia fishing town that's one of the most-photographed spots in North America – before continuing along the rugged Atlantic coast to the fishing village of Lunenburg, renowned for its rich shipbuilding and maritime legacy. Established in the 18th century, this UNESCO World Heritage Site is one of the best surviving examples of a planned British colonial settlement in North America. After lunch, you have a choice of sightseeing in Lunenberg – see the village's 18th- and 19th-century timber-built houses on a walking tour, or visit the Fisheries Museum of the Atlantic, housed in historic waterfront buildings, to gain insights into the Maritime Provinces' seafaring heritage. Return to Halifax for an evening at leisure.


You may spend the entire day exploring Halifax, Nova Scotia's provincial capital and the Maritimes' largest city, as you please – or, if you wish, join your Tauck Director for a city tour, and our local guide for a tour through the Halifax Public Gardens. This evening, enjoy a Tauck Exclusive – a private tour and dinner at Halifax's venerable Citadel National Historic Site, a witness to 300 years of history offering spectacular views of the city and its celebrated harbor.


Bid a temporary goodbye to Nova Scotia as you ride a ferry to lovely Prince Edward Island. Following lunch, arrive in the provincial capital of Charlottetown for a two-night stay. Enjoy an afternoon walking tour, then settle in at your hotel, just steps from Old Charlottetown's boardwalk and Peake's Wharf. The evening is free to spend as you please.


Following a morning at leisure in Charlottetown, set out to discover the wildlife-rich salt marshes and dramatic coastal bluffs of Prince Edward Island National Park. You'll find yourself immersed in local culture later in the day as you visit the Green Gables House, the old farmhouse immortalized in Lucy Maud Montgomery's cherished 1908 novel, Anne of Green Gables. Tonight, cap a very special day by digging into a traditional lobster dinner – a must-have experience on P.E.I.

Day 6: A Bridge to History in Nova Scotia


Depart Prince Edward Island and cross the Confederation Bridge to the province of New Brunswick, then return to Nova Scotia once again. Explore French pioneer life from the early 17th century as recreated by costumed interpreters and artisan demonstrators at the Port-Royal National Historic Site and the Habitation, a reconstruction of one of North America's earliest European settlements. Continue on to a two-night stay in Digby; your historic seaside resort was built in 1929 and overlooks the Annapolis Basin and the Bay of Fundy.


Set off with a naturalist for a whale watching cruise off Digby Neck on the Bay of Fundy, offering world-renowned whale and bird watching; keep an eye peeled for finback, minke and humpback whales and lots of seals, drawn to the bay's abundant plankton. Back at your resort in Digby, pursue what interests you most in the afternoon, then join us at this evening's farewell reception and dinner at the hotel.


As you head back to Halifax for your journey home, wind your way through Nova Scotia's rich Annapolis Valley farmland to visit Grand-Pré National Historic Site, where the British deported the French Acadians in 1755; the incident inspired Henry Wadsworth Longfellow's famous poem, Evangeline. Tour ends: 11:45 AM, Halifax International Airport. For guests wishing to extend their stay in Halifax, Tauck can arrange additional nights at The Prince George Hotel; a transfer to Halifax International Airport is included for these bookings. Allow a minimum of two hours for flight check-in.

A legacy of seafaring gems… think seaside shanties, picturesque fishing hamlets, colorful 19th-century timber homes, and wildlife-rich waters. Private evenings in historic Halifax include the Citadel, and moving stories of Canadian immigrants at Pier 21, two nights on Prince Edward Island, immortalized in novels, and whale watching promise lasting maritime memories.Whale-watch at Digby Neck on the Bay of Fundy. Attend a Tauck Exclusive private dinner and tour at the Halifax Citadel, and a private reception and dinner at Pier 21 National Historic Site. Choose a walking tour of historic Lunenburg or a visit to a fisheries museum, watch history come alive at the Habitation at Port-Royal and tour the P.E.I. farmhouse where the popular novel Anne of Green Gables was set.

Question: What is the mode of transportation and what is the group size?

You will travel on a Tauck Motor Coach throughout the entire vacation. When necessary you will travel by ferry to cross over into Prince Edward Island. The standard group size is 40 plus passengers; however they do offer Small Group departures which travel with 24 or less.

The hotels were substandard as were the rooms. For the price we paid, we were taken.