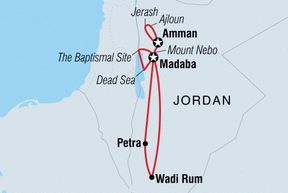 Steeped in biblical history, laden with ancient wonders, thriving with culture and full of friendly people, Jordan is a destination that has to be seen to be believed. Embark on a comprehensive nine-day small-group adventure through the heart of Jordan, exploring the capital, Amman, the vast Wadi Rum, bustling Madaba and the extraordinary Dead Sea. Be dwarfed by the carved Treasury of Petra, learn of the city of mosaics at St Georges church, and eat as many falafels as you can handle. With its sole focus on Jordan, this is an inspiring Middle Eastern journey.

Day 1: Amman
Ahlan Wa Sahlan! Welcome to Amman, a cosmopolitan and contemporary city steeped in biblical history. On arrival at Amman's Queen Alia International Airport, you will be met by a representative and transferred to your hotel. Your adventure begins with an important welcome meeting at 6 pm. If you do happen to arrive early, you may want to consider checking out the Jordan Museum – home to the Dead Sea Scrolls or take a stroll along rainbow street with the locals for some of the best falafel in town.

Day 2: Amman-Jerash- Ajloun-Amman
This morning after breakfast, head north out of the city to the ruins of Jerash – once one of the grandest ancient Roman cities in the world. These are some of the best Greco-Roman ruins around. Take a couple of hours exploring the history of this grand old city before continuing to Ajloun – the fertile crescent of Jordan. Visit the 12th-century Ajloun Castle, built by Saladin’s forces against the Crusaders and then visit the Nature Reserve and visitor centre – a striking building made in natural materials. Head to the Biscuit House, currently owned and managed by local community women under a newly adopted community engagement model, where the women are transformed from traditional employees to actual local community entrepreneurs. Enjoy a soft hike on the nature trail with an abundance of fruit trees as well as the more unusual pistachio, carob and strawberry trees in places, terracing on the hillsides, and of course olive trees everywhere. This evening, enjoy dinner in a local village before later returning to Amman.

Day 3: Madaba
Today, take a walking tour of Amman to discover its ancient history and modern influences. You’ll begin at the hilltop citadel, then meander your way through the backstreets of the city, passing by the Roman Theatre and Odeon, and the Al Husseiny Mosque. Be sure to stop in at a souq (street market) to snack on some Saudi dates, or Iranian pistachios, then continue towards Al Malek Faisal St and to the centre of the city. After getting yourself some falafel and hummus for lunch, journey to Mount Nebo. This elevated ridge some 710 metres above sea level is mentioned in the Hebrew Bible as the place where Moses was granted a view of the Promised Land. On top of Mt Nebo, the very modest Moses memorial church stands and was built around 4th-century foundations in AD597. It houses some of the best (and best presented) mosaics in Jordan, dating from around AD530. Afterwards, travel to one of Amman’s satellite cities, Madaba, for the evening. If you’re feeling peckish, why not check out Haret Jdoudna for dinner? It’s been a traveller favourite for years.

Day 4: Madaba - Dead Sea - Madaba
Enjoy a leader-led walking tour of Madaba after breakfast. Madaba is known as the city of mosaics, most notably the impressive mosaic map that adorns the floor of the Greek Orthodox Church of St. George. It depicts the Holy Land, with Palestine and Lower Egypt, from around AD550. You’ll get the chance to see this artistic marvel on your tour, and afterwards, take an hour or so to explore the city on your own before jumping back on the bus and heading out to Al-Maghtas. Meaning ‘baptism’ or ‘immersion’ in Arabic, Al-Maghtas is a World Heritage-listed archaeological site on the east bank of the Jordan River, and is considered to be the location where Jesus was baptised by John the Baptist. Continue on to the salty waters of the Dead Sea. No visit to this region is complete without floating in this salty water – the unique sensation of floating so high in the water has to be felt to be believed! Return to Madaba for a relaxing evening.

Day 5: Wadi Rum
It’s time to journey down the Desert Highway to the spellbinding Wadi Rum (approximately 4.5 hours) – a landscape of rugged sandstone mountains standing tall among an ochre desert floor. Meet your Bedouin hosts on arrival, then take a browse around the informative visitor's centre and some free time for lunch before heading into this desolate area. Transport into the rum (valley) is by way of rather rickety jeeps operated by the local Bedouin community, as part of an attempt by the Jordanian Government to bring much-needed income into this region – they are safe, trusted and, best of all, good fun! Journey to your camp and relax into the afternoon, possibly with a sunset hike in the rum. Spend the evening being well entertained (and fed) by your Bedouin hosts.

Day 6: Petra
After an included breakfast, it’s back into the jeeps for a desert safari. You’ll visit several of Wadi Rum's distinctive rock formations and have an opportunity to soak up the vast desert landscapes and eerie silence of the valley. Continue to Wadi Musa (Petra) this afternoon, arriving late in the day. If time permits, you could ask your leader to head to ‘Little Petra’ for a sneak preview of what’s to come, or instead, just enjoy a local dinner in town – your leader has got friends in all the right places, so ask them where to go.

Day 7: Petra
Today is a day that you won’t forget for a long time. The archaeological site of Petra is an ancient jewel of Jordan – a series of structures and formations cut out of desert rock. The Treasury is the iconic view of Petra and probably the most striking sight of the region. Walk your way through a siq (narrow rock clef) towards the Treasury to marvel at the spectacle, with walls soaring up to 180 metres on either side. With your guide, you will see the Treasury and also explore more of the site, including the old Roman road, amphitheatre and several old tombs. Then, it is all up to you! Maybe climb up to the Monastery – carved from a mountain summit and the site's second beautiful facade, where you will have a magnificent view of the entire site. This is a memorable day exploring a truly extraordinary destination and is sure to be one of the highlights of your trip. There is a cafeteria on the site, where you can purchase a light lunch, if you’d like. In the evening, there is the option to explore Petra by night on a tour, giving you another viewing of the site away from most of the crowds. This runs on select days, so speak to your group leader, or enquire at the Visitor Centre if this interests you.

Day 8: Madaba
This morning is free for you to decide your plans. Feel free to head back and admire Petra for one last time (it’ll continue to delight you), or alternatively, you can hang back around the village and relax in your hotel. After lunch, bid farewell to the valley and return to Madaba. In the evening, why not get a group of you together for another night of Jordanian feasting – you know you want to.

Day 9: Madaba
With no activities planned for today, you are free to leave the accommodation at any time.