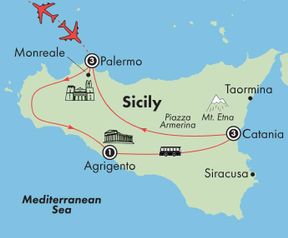 DAY 2, Wednesday - Arrive in Palermo
Benvenuti! Arrive to the island of Sicily, rich in history, culture and tradition. Transfer to your hotel in Palermo; remainder of the day is at leisure to start exploring this energetic city. Tonight, at approximately 6 PM (exact time will be advised on tour arrival day), join an orientation meeting with your Tour Manager on the exciting journey that awaits you, followed by a Welcome Dinner with your fellow travelers
Overnight: Palermo
Meals: Dinner

DAY 3, Thursday - Monreale Cathedral & Palermo Old City Tour
Travel to the hilltop town of Monreale to visit the Norman Cathedral, an architectural masterpiece, with its interior of glittering 12th century Byzantine mosaics. Return to Palermo for a tour of the ancient Old City with its incredible mix of architectural styles, including its magnificent cathedral. In the afternoon, discover Palermo on your own with its bustling street markets, winding alleyways and colorful back streets, or join the optional tour to the charming seaside town of Cefalu, distinguished by its medieval settings. Here, see the magnificent Piazza del Duomo and the delightful Fisherman's Village nestled on one of Sicily's most beautiful sand beaches. Stroll the picturesque lanes in the historic center before returning to Palermo
Optional: Cefalu Tour (PM)
Overnight: Palermo
Meals: Breakfast

DAY 4, Friday - Farm Lunch, Arrive in Agrigento
Morning drive through western Sicily where you view the famous Doric Temple of Segesta rising high on a hill, one of the greatest examples of this style of architecture, constructed in the 5th century B.C. Admire the island's landmark windmills and salt mines on your way to a local farm for lunch, featuring some of the area's local delicacies, including wines. Arrive in Agrigento in time for dinner at the hotel
Overnight: Agrigento
Meals: Breakfast, Lunch, Dinner

DAY 5, Saturday - Valley of the Temples, Mount Etna, Arrive in Catania
This morning, discover Agrigento's impressive Valley of the Temples, a UNESCO World Heritage Site. This splendid archaeological park is the largest in the world with the best preserved temple ruins outside of mainland Greece. Continue to the magnificent Mt. Etna, the tallest active volcano in Europe, dominating the landscape. Explore the foothills around the base station and ascend to reach the two impressive Silvestri Craters; walk along the varied layers of lava which have solidified over the centuries. Weather permitting, see breathtaking views of the Parco dell' Etna and the Ionian Sea. Then, on to Catania, one of Sicily's most important cities for more than three millennia. This lively town with its Baroque-style charm is known as the "black-city" from the dark color of the façades created by the lava stone from Mount Etna
Overnight: Catania
Meals: Breakfast

DAY 6, Sunday - Full Day in Catania
Full day at leisure to discover Catania on your own. Or, join the optional tour to Siracusa, where you can step back in time to the glorious days of Greek Sicily, and explore the birthplace of Archimedes. Visit the archaeological park, the Roman amphitheater, and the "Ear of Dionysius", an awe-inspiring artificial limestone cave renowned for its outstanding acoustics
Optional: Siracusa Tour (AM)
Overnight: Catania
Meals: Breakfast

DAY 7, Monday - Catania City Tour
Begin the day with a stroll in Catania, a wonderful combination of ancient and modern, under the shadow of Mt. Etna. After the town was destroyed, the entire old part of the city was rebuilt in Baroque style with large wide open squares. Walk through the cobbled streets and visit its colorful open-air market. Afternoon is at leisure to explore the city on your own. Or, take the optional tour to the old-world resort city of Taormina, also known as the "Jewel of the Ionian Sea." The tour is highlighted by the city's most famous archaeological monument, the Greek Theatre, one of the most celebrated ruins in Sicily
Optional: Taormina Tour (PM)
Overnight: Catania
Meals: Breakfast

DAY 8, Tuesday - Visit Piazza Armerina en route to Palermo
Departing Catania, travel to Piazza Armerina to view the intricate examples of Roman mosaics at the famous Roman Villa del Casale, designated a UNESCO World Heritage Site. These extraordinarily vivid mosaics, deal with numerous subjects, ranging from Homeric escapades and mythological scenes to portrayals of daily life. The Villa itself was rediscovered in the 19th century after being almost completely covered by a landslide. After lunch, continue to Palermo, where you bid farewell to your Tour Manager and newfound friends, on your last night in Sicily
Overnight: Palermo
Meals: Breakfast, Lunch

Hotel Dioscuri Bay Palace
This first class hotel is located in a very attractive Bay on the seafront of San Leone.

Palace Catania UNA Esperienze
This superior first class hotel is located in the heart of historic Catania near many local attractions.