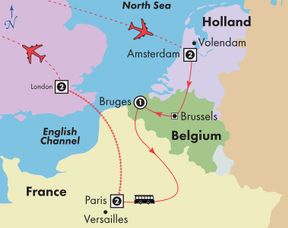 DAY 2, Tuesday - Arrive in Amsterdam
Welcome to Amsterdam, Holland's sophisticated and modern capital. Transfer to your hotel and spend the rest of the day at leisure. Most flights arrive in the early morning and your room may not be ready for you. In this case, leave your luggage with the concierge and your Tour Manager will provide suggestions for you to begin to explore the city on your own. Tonight, your tour begins at 5:30 PM when you join your Tour Manager for a Welcome Drink and orientation meeting that outlines the delightful journey that awaits you. Afterwards, savor a Welcome Dinner together. We recommend that you select flights which arrive in Amsterdam no later than 3:30 PM on Day 2 of the itinerary, or earlier if possible
Overnight: Amsterdam
Meals: Dinner

DAY 3, Wednesday - Amsterdam Canal Tour, Visit Volendam
This morning, board a glass-top boat for a delightful cruise of the winding canals for an up-close view of stately historic mansions, 16th-century gabled merchant houses, and charming churches with bell towers. In the afternoon, travel to Volendam, a quaint fishing village on the old Zuiderzee, surrounded by a picture-perfect harbor lined with wooden houses. You'll view a historic windmill and residents who still wear traditional Dutch clogs, aprons and bonnets. Then travel to a local cheese farm and learn about the process. Tonight, join the optional Amsterdam by night with dinner
Optional: Amsterdam by Night with Dinner (PM)
Overnight: Amsterdam
Meals: Breakfast

DAY 4, Thursday - Brussels City Tour, Travel to Bruges
Depart Amsterdam and travel through Holland's open fields, crisscrossed with canals and windmills to Brussels, capital of Belgium. Here, you'll see the Heysel Stadium and the Atomium, a gigantic structure that still remains from the 1958 World Expo. Continue to view the Palace of Justice, Opera House, Royal Palace, Grand Place and the famous Manneken Pis fountain. Next, journey to the city of Bruges, also known as the "Venice of the North", home to some of Europe's best-preserved medieval buildings. Tonight dinner is in a local restaurant* in Bruges*For Dec 21 departure, dinner will be at the hotel
Overnight: Bruges
Meals: Breakfast, Dinner

DAY 5, Friday - Bruges City Tour, Travel to Paris
Morning orientation tour begins at the Lake of Love (Minnewater) and the Beguinage Convent. Then, walk along the picturesque cobbled lanes of the city's medieval district to Our Lady's Church, housing the famous Madonna statue by Michelangelo. Continue past the Market Square with its 13th century Belfry, one of Bruges' most famous landmarks. and the Town Hall Square with its Chapel of the Holy Blood. You'll understand why Bruges is called a fairy-tale town and considered one of Europe's most beautiful cities. Later, depart Bruges and travel to Paris. In the evening, join the optional Illuminated Paris with Dinner.* Discover the "City of Lights" with the Illumination tour and dinner in a typical French bistro*For Dec 21 departure, the optional tour will replaced with an included dinner
Optional: Illuminated Paris with Dinner (PM)
Overnight: Paris
Meals: Breakfast

DAY 6, Saturday - Paris City Tour
Drive along the impressive Champs Elysees to the Arc de Triomphe, Concorde Square, and the stately Eiffel Tower, symbol of Paris. On to the celebrated "Rive Gauche", the vivacious Left Bank, where artists, philosophers and writers in a long-gone era flourished in the artistic community at Montparnasse. View the Latin Quarter, home to many of France's higher education establishments, including the Sorbonne. Spend the rest of the afternoon at leisure or, attend the optional Palace of Versailles. The tour takes you to Versailles to witness the grandeur of French classical architecture. Visit the Palace and extravagant state apartments and walk the palace grounds and formal gardens
Optional: Palace of Versailles (PM)
Overnight: Paris
Meals: Breakfast

DAY 7, Sunday - Train to London via the Chunnel
Today, transfer to the Gare du Nord train station for your trip from Paris to London via the Chunnel, the 31-mile-long underwater tunnel, considered one of the "Seven Wonders of the Modern World". Upon arrival in London, enjoy a panoramic city tour, which includes a photo stop at the Tower of London and views of Westminster Abbey, Trafalgar Square, Buckingham Palace, Piccadilly Circus, Big Ben and the Houses of Parliament. Following the tour, transfer to your hotel. Tonight, dinner is on your own
Overnight: London
Meals: Breakfast

DAY 8, Monday - Full Day in London
Spend the day at leisure to explore London, the capital of the United Kingdom and one of the world's premier financial, commercial, and cultural cities. With countless sightseeing opportunities, cosmopolitan London offers more in one place than almost any other city on Earth. Some main attractions include the British Museum, the Tower of London, West End Theatre, London Eye, Madame Tussauds, National Gallery, Tate Modern, and Globe Theatre. Maybe take Afternoon Tea, visit a local pub, or shop for souvenirs at Harrods Department Store or along Regent Street. Perhaps, join the optional Tower of London and St. Paul's Cathedral tour. Tonight, celebrate your final night in England with a Farewell Dinner
Optional: Tower of London & St. Paul's Cathedral (AM)
Overnight: London
Meals: Breakfast, Dinner

Apollo Museumhotel
This tourist class hotel is well located in the heart of the city overlooking the Stadhouderskade and next to the Rijksmuseum.

Mercure Paris Centre Tour Eiffel
This first class hotel is situated in the center of Paris, close to the Eiffel Tower.

DoubleTree by Hilton Angel Kings Cross
This first class hotel is located in the heart of Islington.