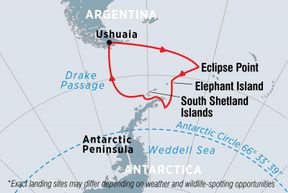 Experience the natural phenomenon of a total solar eclipse in Antarctica with Peregrine. For 14 days, embark on an open water exploration to the Antarctic Peninsula, passing by colonies of Adelie penguins and leopard seals, migrating whales and flocks of sea birds adorning the ice shelves, crisp waters and glacial vistas of the icy continent. On board the Ocean Endeavour, gain an insight into Antarctica with lectures and workshops presented by experts in the field, and have plenty of time to interact with likeminded travellers, enjoy onboard facilities and breathe the fresh air of the southern oceans.

Day 1: Ushuaia
Bienvenidos! Welcome to Ushuaia. With nothing planned apart from an important welcome meeting this evening, you’ve got today to begin exploring the world’s southernmost city. Take a stroll down Avenida San Martin, or for the more adventurous, how about tackling part of the Martial Mountains for a killer view over the Beagle Channel. After meeting your local leader and fellow travellers at your welcome meeting, why not head out for an optional dinner. Tonight’s all about introductions, and what better place to do it than with a traditional asado – an Argentinean-style barbecue.

Day 2: Ushuaia – Embarkation Day
You’ll jump aboard the Ocean Endeavour for your Antarctic expedition later in the day, so this morning, continue to explore Ushuaia. Perhaps check out the Museo Maritimo to brush up on local history, or just enjoy a morning strolling this languid town. Once you’ve boarded the ship, wave goodbye to Argentina and say hello to the Drake Passage. Next stop: the Antarctic.

Day 3-5: At Sea
The next three days are all about chilling out and learning about the wildlife, geography and natural weather events coming up. You’ll have the opportunity to enjoy presentations from marine biologists, astrophysicists and meteorologists to get you up to speed on all things Antarctica. You’ll also have the chance to get to know your fellow explorers in the onboard bar and dining areas. There are things on at different times of the day, so do as little or as much learning (and chatting) as you like! The Ocean Endeavour is equipped with a gym, library, heated saltwater pool, jacuzzi, sauna and more, so there’s always something to keep you busy while crossing the open waters.

Day 6: Total Solar Eclipse (Eclipse Point)
This morning is your best chance to view an incredibly rare total solar eclipse in one of the best places to do so. Overnight, the ship will have travelled into what’s called the zone of 100% obscuration – a specific region of coordinates which will allow the eclipse to last the longest possible time. Early in the morning, you’ll be invited on deck to experience the eclipse in all its glory through (provided) specialised goggles. On deck with you will be the ship’s resident astrophysicist and meteorologist, as well as expert photographers who are on hand to help you capture the magic moment. Afterwards, head back to your cabin to relax and take stock as the ship continues to head west to Elephant Island.

Day 7: Elephant Island
Catch a glimpse of the first stretch of land since the Beagle Channel as Elephant Island comes into view today. This land mass sits in the outer reaches of the South Shetland Islands, close to the northern tip of the Antarctic Peninsula. The island is where British explorer Ernest Shackleton and his crew of 28 landed in 1916 after losing their ship – the Endurance – far off the coast. You’ll pass by a monument on Point Wild commemorating Captain Luis Alberto Pardo who led the rescue – survivors used the point as refuge for over four months. Icebergs, jagged mountaintops and marine life – you’ve definitely hit the Antarctic now.

Day 8: Weddell Sea
Continue your exploration further south towards the Antarctic Peninsula and stop by the eastern shores of Joinville Island. Here you’ll go in search of Adelie penguins, easily recognised by the white ring around their eyes. Adelies nest at this time of year, and if you’re lucky you might get to witness some hatchlings scattered across the shores. This is one of the largest Adelie penguin colonies in the world, and as a result attracts other, predatory, marine life such as leopard seals.

Day 9-10: Antarctic Peninsula
Head towards the main Antarctic Peninsula today – this is where the south really comes to life. During the summer months, tens of thousands of gentoo penguins find a piece of rock that they can nest on and incubate their eggs. You’ll get the chance to jump on a Zodiac and land on shore beside the wildlife – an unforgettable experience deep in the Antarctic wilderness. Over the next two days, you’ll also catch sight of rugged glacial faces, icebergs and a heap more wildlife, including many seal species. The onboard expedition team will also be scouting for humpback whale sightings off the boat, with thousands migrating to Antarctic waters at this time of year to feed. Make sure your camera is fully charged and you’ve got ample image storage available – you won’t want to miss a thing!

Day 11: South Shetland Islands
The Antarctic adventure isn’t over just yet. Your ship will head north towards the Shetland Islands, known for their elephant and fur seal colonies, water-bound volcanos and a number of scientific bases. Be sure to spend twilight out on deck, too – the Shetlands have some of the best sunsets in the south. With a drink in hand and surrounded by your shipmates, toast another Antarctic day in style.

Day 12-13: Drake Passage
It may be time to cross the Drake Passage and head back to civilisation, but these sea days on board the Ocean Endeavour are not without things to do. Gaze out to the horizon to spot orca and seabirds, participate in onboard workshops, learn a thing or two about photo editing, and catch up with some travel pals over a drink, sharing your best memories of the expedition.

Day 14: Ushuaia – Disembarkation Day
Arrive in Ushuaia port early in the morning for disembarkation. With no other activities planned for the day, you are free to depart from the port at any time for another day of exploring Ushuaia or to catch a connecting flight. Arriving back doesn’t mean your adventure has to come to an end! If you would like to spend more time in Ushuaia, we’ll be happy to book additional accommodation (subject to availability).