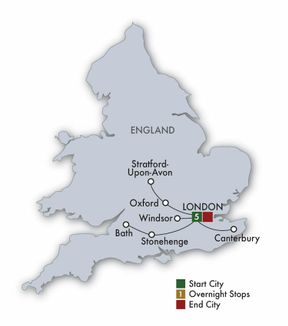 Why pay full price? Call us or click above for a quick quote and save money on CIE Tours.

Discounts apply to land only pricing, per person, and may vary by departure date. Valid for private group and shared group vacations. Not combinable with any other CIE Tours offers or discounts. Offer may be withdrawn at any time, and is subject to availability. Other conditions may apply. Additional restrictions may apply.

Day 1: Tower of London | Welcome Dinner
Tour begins 2:00 PM at your London hotel. Visit the iconic Tower of London to learn about its history as a royal residence, fortress, and famous prison. View the Crown Jewels and the ceremonial guardians of the Tower, the Beefeaters, in their full regalia, and the ravens that tradition says protect the monarchs of England and the Tower. In the evening, enjoy a welcome drink at your hotel with your group, and then dine together. (D)

Day 2: Windsor | Windsor Castle
Depart for the town of Windsor and enjoy a panoramic tour of this charming town located on the River Thames. Have lunch with your group, then visit Windsor Castle, the of¬ficial residence of the Queen. Built in the 11th century, it is the longest-occupied palace in Europe. Marvel at its architecture, sumptuously appointed apartments, and extensive art collection. Head back to London for a free evening. (B, L)

Day 3: Stonehenge | Roman Baths
Travel to Stonehenge to view one of England’s most mysterious landmarks. Created between 3000 BC to 2000 BC, these massive stone monoliths each stand 13 feet high, seven feet wide, and weigh approximately 25 tons. Stonehenge is a UNESCO World Heritage site, and archaeologists remain unsure of its purpose. Proceed on to the town of Bath for a visit to the Roman Baths, wonderfully preserved ancient baths located at the site of a natural hot spring. Discover their history from Roman times and importance in Britain through the centuries. Return to London, where your evening is free for enjoying independently. (B)

Day 4: Oxford | Stratford-upon-Avon | Shakespeare's Birthplace
Explore Oxford on a guided walking tour with your tour director, discovering this city and the famed university, founded in the 12th century. Next, go to Stratford-upon Avon, where you will enjoy free time for lunch. Visit Shakespeare’s Birthplace, now a museum exploring The Bard’s early years and life in the 16th century. Drive through the rolling hills of the Cotswolds as you return to London for a free evening. (B)

Day 5: Leeds Castle | Canterbury Cathedral | Historic Brewery Visit
Journey to Leeds Castle in Kent. This picturesque castle was built on islands formed by the River Len. Most of the present-day castle dates to the 19th century, though its history goes back to 857. Proceed on to Canterbury, where you’ll gain admission to Canterbury Cathedral. It is one of the oldest and most important Christian structures in England, famous for its beauty as well as its place in history and literature. Travel on for a tour of a historic brewery to learn about beer and the brewing process before enjoying a beer tasting. In the evening, gather with your group for a farewell dinner. (B, D)

Fantastic trip, more than I was expecting.

We greatly enjoyed this tour. The itinerary covered a lot of fabulous places to see, the accommodations were excellent, and the tour guide/coach driver was very entertaining and informative. We will definitely consider CIE and Affordable Tours in booking our next vacation. Thanks!

I expected more hands on guidance in the choice of pubs, more going as a group. However I liked very much our driver/guide, Matt Nolan. His manner was very pleasant, his introductions to the areas we visited and history talks were just enough, and he was skilled driver on the narrow roads. Time on the bus was calm and quiet which seemed to suit us. He managed all the travel details professionally.

Wonderful experience, we are looking forward to booking another tour.

It was a great experience from beginning to end.

I would highly recommend CIE Tours. The tour, accommodations and food were excellent. Our driver, David, was the best!

2nd trip with CIE. both were up to expectations. good drivers and guides. good selection of places to tour.

This was a great tour with lots of included activities. CIE was very accommodating and helpful.

CIE is a very solid tour company. This was our third trip with CIE and we have toured with five other companies, all well known. CIE is not the cheapest, but the quality is excellent and there are no optional excursions. Everything is included in the price. This means they stick to popular tour options. Optional excursions offer the chance to customize the tour or to opt out of some selections. There were no CIE scheduled attractions that we would have left out. Service and organization were very sound as always.

Our driver/ guide, Murt, made the whole experience very enjoyable. He had a great sense of humor, provided interesting stories & historical events and gave us the best amount of time each day to see all the events on our schedule.