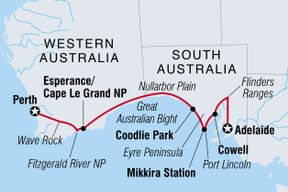 From Perth, cross the vast plains of Western Australia and the mighty Nullarbor towards Adelaide on a nine-day epic road trip, covering the south-western half of this mighty continent. You'll have plenty of opportunities to spot a kangaroo, wombat, emu and dingo in the wild, swim with dolphins and beside sea lions and take in some of Australia's best coastal scenery. This trip is the ultimate itinerary for those looking for a wild and nature-filled journey in the outback. Sit back and relax as you watch the great expanse of Australia's rugged interior pass you by, without a worry in the world.

Day 1: Perth – Fitzgerald River National Park
Begin your eastbound adventure as you travel over the Darling Ranges. After a morning break at the historic township of York, continue our journey south with a lunch stop at Wave Rock, where there's the opportunity to have a look at this amazing rock formation. After lunch, drive further south to the Fitzgerald River National Park – an internationally recognised world biosphere reserve with plenty of beautiful beaches, rugged coastline and the opportunity for a short walk.

Day 2: Cape Le Grand National Park
Begin the morning with a brisk hike up East Mt Baron – one of the three quartzite peaks that make up the Barren Ranges. Legs stretched, take the coastal route into Esperance for a coffee break and mosey around. Then get ready for some of Australia’s most spectacular scenery – this part of WA has no less than nine national parks, and where you'll camp is arguably the most spectacular of all, Cape Le Grand National Park. The ocean here is crystal clear, the local Western grey kangaroos are regularly sunbaking on the beach and the sand at Lucky Bay has twice been judged Australia’s whitest. Enjoy a free afternoon here – how you spend it is totally up to you. Set out on a coastal bushwalk, splash about in the sea, capture some epic photos or just kick back with your new travel pals on the beach.

Day 3: The Nullarbor
If you didn’t have a chance to spot any roos yesterday, head down to the beach early this morning and see what’s hopping about before a morning hike up Frenchman’s Peak which has stunning views across the inlets and islands of the Recherche Archipelago. Afterwards, take a stunning coastal drive stopping at some of the region's most breathtaking beaches including Twilight Cove before heading to the outback town of Norseman for lunch. Hit the Eyre Highway after lunch to continue the journey eastbound. Tonight, if the skies are clear, be left speechless by the show of constellations and shooting stars on display high up above.

Day 4: The Nullarbor
Driving’s the name of the game today – you’ve got 500 kilometres of the world’s longest stretch of straight road to cover! Today will certainly give you a sense of the sheer size of this vast and ancient land. The name ‘Nullarbor’ is derived from the Latin for ‘no trees’, so vegetation is one thing you shouldn’t expect to see today. Make a stop at Eucla – an old telegraph township now mostly buried beneath sand dunes – then call in for a night’s camping at Koonalda Homestead in the Nullarbor National Park. This unique camp site was originally a sheep shearing station and fuel and rest stop for people travelling along the Nullarbor in the 1950s. Abandoned in the 1970s, the site became somewhat of a car graveyard with old cars left behind, broken down on the Nullarbor Plain. It's a photographers dream!

Day 5: The Great Australian Bight – Coodlie Park
Stops for today include the highway’s camels, kangaroos and wombats crossing road sign and the Bunda Cliffs – where the Plain drops dramatically into the Southern Ocean. Running for approximately 200 kilometres along the Great Australian Bight, this is the world’s longest uninterrupted line of sea cliffs. Drive onto the Nullarbor Plain and across the dingo fence while travelling through Yalata First Nations lands. In the afternoon, check out the Ceduna Arts and Cultural Centre. Here you will learn more about the different styles and meaning behind many forms of First Nations artwork. Stop at Streaky Bay for any supplies and after a drive, arrive at Coodlie Park bush camp. This working farm has traditional cropping, sheep and a project of tree planting on their own land to offset their own carbon emissions.

Day 6: Mikkira Station
Today is a day filled with oceanside adventures! This morning you’ll have the opportunity to swim, snorkel and splash about with playful sea lions and dolphins on a three-hour cruise in the calm and sheltered waters of Baird Bay. Those who choose to stay dry will have the morning at their leisure, perhaps deciding to visit Point Labatt seal colony. In the afternoon, test out your sand boarding skills in the Lake Newland Conservation Park sand dunes then explore the spectacular Eyre Peninsula coastline visiting Talia Caves before heading to Port Lincoln. This seaside community is known for its seafood, so be sure to consider that with your dinner options tonight.

Day 7: Port Lincoln – Mikkira Station
This morning you will have time to do some optional activities. For people not looking to book anything in, there will be time to explore the Eyre Peninsula including Whalers Way, Coffin Bay, and Port Lincoln. Enjoy a delicious lunch on the foreshore and afterwards have some free time to check out the town before making the short drive back to our campsite in Mikkira Station, home to a wild koala population. Tonight you’ll go to sleep under the koala-filled trees and wake to the now familiar sounds of native birdlife.

Day 8: Lincoln National Park
This morning, hit the water for a surf lesson with Xtreme Kite and Paddle on a remote beach. Those not wanting to surf will be able to relax, swim or explore. After lunch, head onwards to the ancient southern Flinders Ranges and Mt Remarkable National Park. Set up camp for the night at Mambray Creek and then head out to see the abundant native wildlife that call this region home.

Day 9: Mt Remarkable – Adelaide
Embark on a hike this morning on Davey’s Gully Walk in Mt Remarkable National Park, before hitting the road back to Adelaide and travelling through some of South Australia quant country towns. You may even have time to indulge in a wine tasting in the Clare Valley. Later in the day, this overland adventure will come to an end on arrival in Adelaide. With no activities planned after arrival, you're free to leave at any time; however, we recommend joining your travel crew for an optional dinner and drinks to celebrate your Australian adventure.