Greece with Turkey by Land and Sea 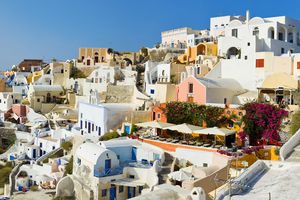 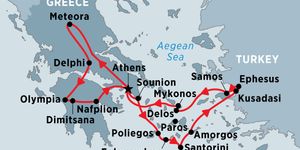 Explore the delights of Greece, plus a brief jaunt into Turkey, on this 16-day combined overland and cruising tour. This tour captures the ancient treasures, charming landscapes, sophisticated cities and turquoise coast that defines Greece. Wonder at the spectacular hanging monasteries of Meteora, dive into clear Aegean waters off the coast of uninhabited island Poliegos and stroll the cobbled streets of Santorini. Explore spectacular ruins with local guides, visit bustling white-washed old towns and unwind on the deck of your comfortable small ship with a drink in hand - this journey is a lesson in sun-soaked relaxation.