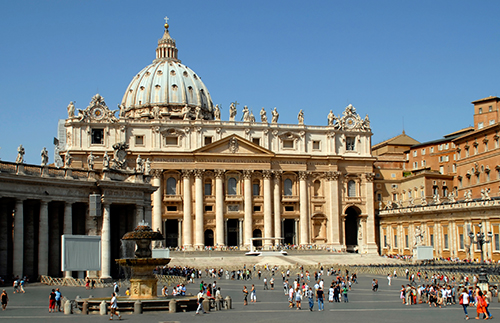 The United States is home to nearly 70 million followers of the Roman Catholic Church, making it the largest religious denomination in the United States. If you’re one of theseÂ followers, this next item will be of particular interest to you.

You may know this already, but Pope Francis has declared the year of 2016 a Jubilee of Mercy. While every day is a good day for people of faith to reflect upon and reaffirm theirÂ beliefs, the Pope’s declarationÂ makes 2016 a particularly good year to make a pilgrimage of faith.

With that in mind, Globus and Cosmos are offering special vacation packages in 2016 for those who want to visitÂ the holy grounds of the Catholic Church. Globus has built a network of experienced travel professionals, tour guides, and local liaisons that allow them to offer unique tours you can’t get anywhere else, with exclusive, insider access to many famous landmarks and sights. TheirÂ guided tours through Rome and the surrounding area will leave nothing to chance and leave nothing out of your experience.

Here are the two tours being offered:

Mass is included throughout both itineraries, of course. Book now and save up to 10% on either of these tours.Â If you’re interested in making thisÂ spiritual pilgrimage next year, visit our website or call 1-800-935-2620 toÂ speak to one of ourÂ experts, who can guarantee you the best price.