Luxembourg is a small country in Europe bordered by Germany, France, and Belgium. The country, which features nature areas and the Ardennes Forest in the north, is also home to the Moselle River Valley in the east. Its capital of Luxembourg features fairy tale castles, galleries, museums, and a vibrant nightlife. Tours of the country and capital make it possible for you to visit places, such as the Palace of the Grand Duke of Luxembourg, and see the changing of the guard. The Old Town quarter is also immersed in history. The capital, like the country, is small and contains an area of only 20 square miles. However, a visit to Luxembourg and its capital will prove that big things really do come in small packages. With tour operator volume buys plus our low everyday prices you can save up to 40% versus assembling the same itinerary on your own! Book your Luxembourg tour today with AffordableTours.com, your discounted tour headquarters. View Luxembourg Tour Deals and Discounts 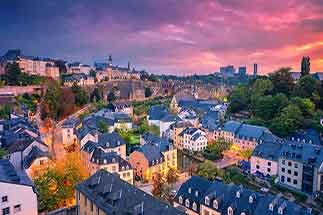 Luxembourg Tours Things To Do

Luxemburg is one of the many destinations you could visit almost any time of the year and have good weather during your stay. The only thing you should keep in mind is that the temperatures in the north of the country are a bit cooler. It's better to be prepared and take a rain jacket.

Reviews for Luxembourg Tours and Vacations

I loved the Small Group tour. It made for a smoother trip and a better ability to get to know all those we traveled with.

Although we couldn't stay in Amsterdam, I understand that it was out of your hands. Other than that everything went well. I enjoyed my trip very much and yes definitely I will book my next trip with Globus.