Save up to 40% on France Tours & Vacation Packages 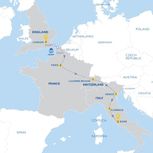 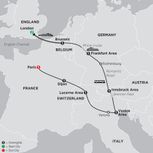 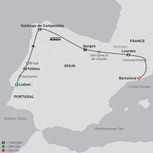 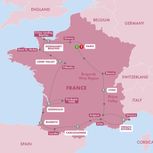 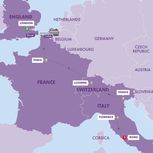 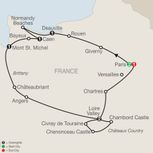 Vive La France! Most France tours begin or end in Paris so you can ascend the Eiffel Tower, tour Notre Dame, see the famous art in the Louvre, walk along the Seine, and visit the ornate Palace of Versailles. Browse the upscale boutiques along the Champs d'Elysses, savor croissants and baguettes, climb the Arc de Triomphe and admire the city's scenic beauty and cosmopolitan flair. Of course, there are countless other destinations in France that are just as wonderful. Take in the views in the French Riviera, visit the large coastal city of Nice and feel the breeze in Cannes down to St.Tropez. The Normandy region is a fascinating area for history buffs, the Bordeaux, Burgundy, Loire and Champagne regions are perfect for wine lovers and the lovely Loire Valley is the former playground of France's monarchs. Where ever in France you decide to explore, book one of our France tours and save up to 40%. As a large scale seller of France tours and France vacations, we will offer you low prices and award-winning customer service.

TOP THINGS TO DO IN FRANCE

France is luxurious, edgy, and diverse. Paris has captivated the world with its fashion, gastronomy, and art. The chateaus and rolling vineyards in the countryside and the elegant cities and medieval towns, there is something beautiful in every corner of this country. From Normandy, Loire Valley, Bordeaux and French Rivera, you could spend weeks in France and still not experience everything.

1. APPRECIATE ART AT THE LOUVRE MUSEUM

This is the largest museum in the world, and home to famous paintings and sculptures like the Mona Lisa and Venus de Milo. In 1546, Francis I converted as a residence for the kings of France but after the fall of the empire, the beautiful building became a museum. In 1682, Louis XIV chose the Palace of Versailles as his residence, which left the Louvre as a place to display the royal collection. Inside are about 38,000 objects, dating from prehistoric up into the 21st century.  Located on the Right Bank of the Seine, this is a must visit when going to Paris.

Find a France itinerary that visits the Louvre! All of our travel partners have VIP access allowing you to skip the super long lines and waltz right in. If you’re visiting the Louvre on your own, we recommend going to the Louvre at night on Wednesday and Friday as they close at 9:45pm and crowds will be thin. Also, on the first Saturday of every month, the Louvre opens from 6pm to 9:45pm and admission is free!

Although this street is usually always bustling, who can resist shopping in France? Along the avenue you can find small cafes, restaurants, and even fast food. Among the variety of stores you can find here, there is Tiffany & Co., Cartier, Louis Vuitton, Sephora, Hermes, Valentino and many more. Visit Laduree, where you can find the best macarons in over 100 different flavors.

Most stores close around 10pm, so be sure to check the hours of any places you want to go shopping. The tree lined street is outside, so this is the perfect place to stroll when the weather is nice.

Located on the west end of the Champs-Elysees, the Arc de Triomphe is a memorial for all who fought for France especially in the French Revolutionary and Napoleonic wars. The French Emperor, Napoleon, ordered the construction of the Arc de Triomphe in 1806. In 1920, the remains of an unknown soldier where placed underneath the Arc and an eternal flame is lit every evening to commemorate the soldiers that died in both World Wars. You can climb to the top of the monument for the best view of many French landmarks.

4. TAKE IN THE VIEWS FROM THE EIFFEL TOWER

No trip to France would be complete without seeing the Eiffel Tower. It took two years to build, and since then the historic landmark became a visual representation of Paris. You can walk the multiple levels of the tower, but they also offer an elevator that takes you straight to the different viewing platforms and to the very top. Whether you choose to visit during the day or night, it’s a memorable view.

Just like the Louvre, it’s best to visit the Eiffel tower with one of our travel partners. There are lines to get in and then more lines to get up the tower. On a guided tour with one of our partners, you’ll be able to skip that! July to August are considered off season so crowds during this time are less than high season. The viewing platforms are outdoors, so dress appropriately for the weather.

This world known cabaret is best enjoyed while sipping on a glass of champagne. Dancers perform every night on the brightly lit stage with fabulous costumes. The red carpet at the entrance will make you feel like a celebrity, and you’ll be entertained from the moment the red curtains draw back.

Chateau de Chambord in Chambord is known for its distinctive French Renaissance architecture and it one of the most recognizable chateaus in the world. It was built by Francis I as his hunting lodge, even though he rarely visited.  Its grandiose architecture rivals the Palace of Versailles and is the largest and most majestic chateau in the Loire Valley.

Pont du Gard was built by the Romans in southern France in the 1st century. This aqueduct bridge used to carry water over 50 km away. It is said that the aqueduct supplied the city with 8,800,000 gallons of water a day! It is one of the most week preserved and the highest of all Roman aqueduct bridges. Some of the stone bricks used to construct it can weigh up to six tons and were cut to fit together without mortar.

8. EXPLORE THE CATHEDRAL OF NOTRE DAME

This medieval Catholic cathedral located in Paris is on the best examples of French Gothic architecture. It is most well-known for the enormous and colorful stained glass windows. It also houses on the with world’s largest organs and huge church bells. Construction began in 1160 and much of the religious imagery was destroyed during the French Revolution.

9. LEARN ABOUT HISTORY AT MONT SAINT-MICHEL

Located on an inland right off of Normandy, it has held strategic fortifications since ancient times and since the 8th century it has been the seat of the monastery, from which it draws its name. With such a fascinating past, the high tides turn this mountain into an island and during the low tides, you can barely see any surrounding water.

Since it is located right on the water, during the winter months the wind can make it quite chilly. It will be the busiest during the summer and the rainiest during November. Even though it might be cold, it will be beautiful during Christmas time.

10. SOAK UP THE SUN ON THE FRENCH RIVIERA

This playground and vacation spot for elites around the world, this Mediterranean coastline is on the beautiful southeast corner of France. Known for its beauty and glamorous surroundings, this is the perfect place to relax, enjoy food and wine combined with fascinating history and culture.

The climate is moderate nearly year-round. During the day, the temperatures are warm and sunny, and they get a bit cooler in the evening when the sun goes down. When the weather is the warmest is when the area sees the most crowds.

France tours are prepackaged trips with a set itinerary and dedicated tour manager. Many people who want to take a France vacation want to avoid all the planning and logistics involved in a big week or two week foreign trip abroad and are looking to save money by doing it all in a package instead of piecing things together at full price. The trip is led by a tour director who will take care of all the services from beginning to the end of your vacation. Your tour director connects you with local tour guides who will have a lot of knowledge on the specific cities you explore. Typically, hotels, transportation throughout your trip, some meals and sightseeing are arranged and included with the price of your France tour.

Most France tours begin or end in Paris. With so many things to see and do in this capital city, it's difficult to fit them all in during a short visit. But you can try! Ascend the Eiffel Tower, tour Notre Dame, see the famous art in the Louvre, walk along the Seine, and visit the ornate Palace of Versailles. Browse the upscale boutiques along the Champs d'Elysses, or just sit in a street side cafe, savoring croissants and admiring the city's scenic beauty and cosmopolitan flair.

What's Included on a France Tour?

Generally, a France tour will include as many services as possible, giving you less to worry about. Usually included on your France tour are: transportation (getting from place to place while on tour), accommodations, most meals, and the services of a dedicated tour director. As per the itinerary, certain sightseeing opportunities are also included: tickets to special VIP access to the most famous landmarks, skip the lines, and when available, access to a personal local guide for expert commentary.

Certainly France tours afford visitors wonderful scenic views of rolling countryside and working vineyards as you journey from one area of the country to another. Be sure to sample the marvelous offerings from the Bordeaux, Burgundy, Loire and Champagne wine-growing regions.

The best France tour is the one that fits your budget and schedule! The most popular tour operators are Globus, Trafalgar, Insight Vacations, Cosmos, Costsaver, CIE Tours, Intrepid, Tauck and others. You can’t go wrong with any France tour. Please speak with one of our travel consultants to find the best tour for you!

How Much Do France Tours Cost?

You can book an affordable France tour starting from under $99 per day per person. Besides our award winning customer service, the best part about booking with AffordableTours.com is you will always receive a discount on your France tour. We are committed to providing you with the lowest prices on all top tour operators. No one beats our prices on all of our France tours!

Very nice trip. Hotels were not close to markets but all very clean and served a lovely breakfast.